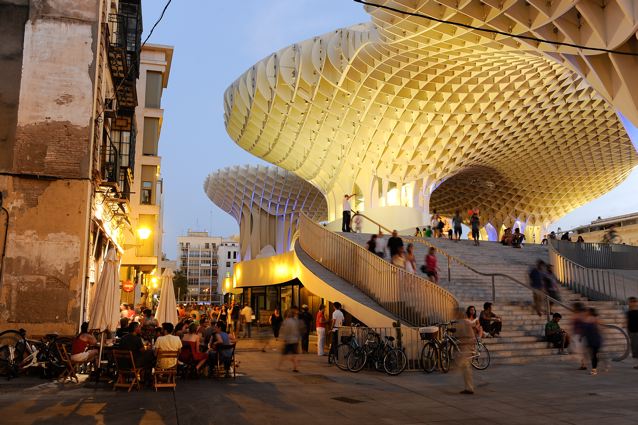 Its claim to fame – recognition as the world’s largest wooden structure.

That headline-grabbing hook, however, only underscores the amazing design qualities of Metropol Parasol, the redevelopment of the Plaza de Encarnacion in Seville, Spain. The project, completed over the course of seven years by Jurgen Mayer H. Architects, reasserts the central arcade as a community meeting place and market. And it’s quickly becoming a magnet for tourists and locals alike.
Offering an architectural museum, a farmers’ market, an elevated plaza, multiple bars and restaurants, as well as a panorama terrace overlooking the entire space and neighbourhood, the project reaffirms Seville’s spot as one of the world’s most fascinating cultural destinations. Accented by a series of undulating parasols, Metropol’s interlocking honeycomb of wooden panels rise from concrete bases, which are positioned to form canopies and walkways below the parasols.

The German architect’s goal with Metropol Parasol’s neutral tone was to help harmonize the stark contrast of ultra-modern structure with the medieval surroundings of Seville. Stairways and storefronts sit below the wooden parasols of the innovative structure, which is made from bonded timber with a polyurethane coating.

Originally, the site was slated to become a parking garage, but after excavations revealed archeological findings, the city of Seville decided to make the site a museum and community centre.

The building, popularly known as Las Setas de la Encarnación (Incarnación’s mushrooms), was completed in April 2011 and has dimensions of 150 by 70 metres (490 by 230 feet), with an approximate height of 26 metres (85 feet).

The structure consists of six parasols in the form of giant mushrooms, whose design is inspired by the vaults of the Cathedral of Seville and the Cathedral of Seville and the ficus trees in nearby Plaza de Cristo de Burgos.
Metropol Parasol is organized over four levels. The underground level (Level 0) houses the Antiquarium, where Roman and Moorish remains discovered on-site are displayed in a museum. Level 1 (street level) is the central market. The roof of Level 1 is the surface of the open-air public plaza, shaded by the wooden parasols above and designed for public events. Levels 2 and 3 are the two stages of the panoramic terraces (including a restaurant), offering one of the best views of the city centre. A little history: since the 19th century, a market was located in the plaza, housed in a market building. The building was partially torn down in 1948, according to plans for urban renewal. The market itself remained, however, until 1973, when the rest of the dilapidated building was finally torn down. The land remained dormant until 1990, when the city decided to construct underground parking with space for a market on top.
In the the midst of construction, however, ruins dating to Roman and Andalusian eras were discovered, and construction was frozen after an expenditure of 14 million euros. In 2004 the city decided to attempt to develop the area again, and opened an international competition to solicit bids.
Mayer, 45, who spoke at the Interior Design Show in Toronto in January 2013, has said that the forms of his buildings were inspired by the vaults of Seville’s expansive cathedral and that he wanted to create a “cathedral without walls.”

To that end, the building differs from others of its kind, in that it is not a closed institution, locked at night, but a place that can be used at all times.

A reviewer noted that it catches and holds views from side streets, and from inside the new structure looking out.

“The Metropol Parasol offers much more than a vision of architectural beauty, it’s a breathtakingly modern interpretation of an urban centre, a place to be inspired but also to do the everyday things you do in city life.”

Founded in 1996, J. MAYER H. Architects focuses on works at the intersection of architecture, communication and new technology. Founder and principal Jürgen Mayer H. has received both national and international awards, including the Mies-van-der-Rohe Award for emerging architects in 2003, the Holcim Award Bronze in 2005, and the Audi Urban Future Award in 2010.