Why a wood house is a good house 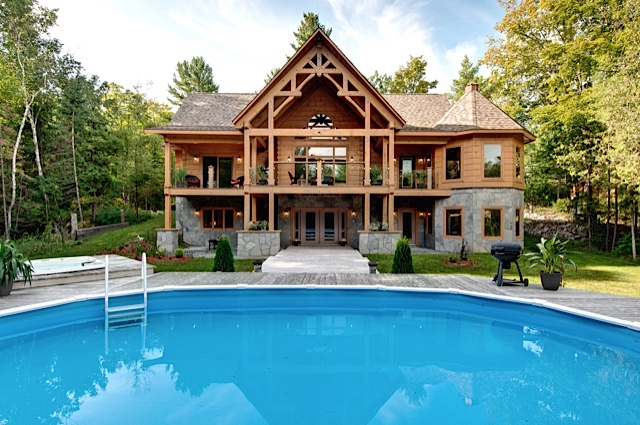 Why a wood house is a good house

First, let’s clear up one misconception about log homes – they are definitely not bad for the environment.

In fact, says Rick Kinsman, president of Confederation Log & Timber Frame, just the opposite is true.

“The biggest sources of environmental problems are homes that use an abundance of such materials as concrete or drywall,” says Kinsman, whose company has embraced the concept of green building since its inception more than 35 years ago. “Those materials I mentioned often end up in landfill sites and require a lot of energy to produce.”

Which brings us to wood, which is a renewable resource. Virtually all the wood Confederation uses is harvested from mature/end-of-life-cycle white pine from a responsibly managed forest. In addition, the logs are then air-dried versus kiln-dried, which conserves energy. And, compared to other major building supplies, wood consumes less energy across its life cycle, contributes less pollution and has a lighter carbon footprint.

In the case of Confederation, Kinsman says, the idea of a ‘leaky’ home couldn’t be further from the truth, thanks to a variety of innovations that mean their customized homes will perform today and for decades to follow.

Confederation has redefined the traditional ways of joining logs together to produce a truly energy-efficient home. They’ve also introduced new ways to install windows and doors and a thru-bolt system which allows for your logs to always be tight. But perhaps the most ground-breaking development offered by Confederation is their new EEE – Engineered Energy Efficient – Log, which makes them a key differentiator compared to other log home builders.

Fully engineered and tested, the EEE Log is constructed using Confederation standard dry white pine. Carefully chosen planks of wood, free from insect damage, fungal stains or other physical defects, are laminated together with a structural bonding resin under very high pressure. The core is filled with high-density insulated foam, which accounts for the higher R-value.

Manufactured logs have the same appearance as traditional logs, but will not shrink or settle over time. The likelihood of checks, splits or stains occurring in the wood is virtually eliminated and maintenance is minimal. Another benefit is that logs are straight and remain that way.

“While conventional log homes continue to represent the bulk of our sales, we have now introduced the EEE Log, which has the same look and feel of a traditional log home, only it has a higher R-value.

“For consumers who are really focused on higher than average R-values, but want the charm and ambiance of a log home, the EEE log is the ideal solution.” Such was the case with owner Ray Anderson, who opted for an EEE Log for his Gatineau, Quebec cottage. “It appealed to me instantaneously because of its high R-Value. Our dream was to put up a cottage we could use more comfortably in the winter months,” says Anderson, noting that the EEE Logs will help to keep energy costs down, making it more affordable.

Over the past year, now that Confederation has built EEE Log homes both in Ontario and Quebec, Kinsman says the feedback has been very positive.

“It’s still a relatively new industry and many consumers – purists if you will, still prefer to build a solid wood home,” he says. “And there’s also an erroneous perception that these EEE Log homes cost considerably more. In reality, though, the homes only cost about five per cent more than conventional homes and this small added expense is more than offset by ongoing energy savings.”

But, like anything visionary and new, knowledge and awareness about the EEE Log is limited, Kinsman adds.

“As awareness grows, so will demand,” he says. “EEE Logs have been built in both Ontario and Quebec, and with a dealer network in several parts of Canada and the U.S. that is also growing, this will spike sales as well. Performance data as far as energy savings go should help considerably, as well. “With the whole matter of carbon reduction growing in terms of perceived importance, and with anticipated changes in how our provincial and federal governments respond to this challenge, we firmly believe that will have a positive impact on the demand for EEE Logs as well.”

Confederation Log & Timber Frame has been in operation since 1979. A family business with a dedicated and skilled staff, the company is particularly proud of its history in the log and timber frame building industry and involvement in constructing residential, commercial and industrial buildings around the world.