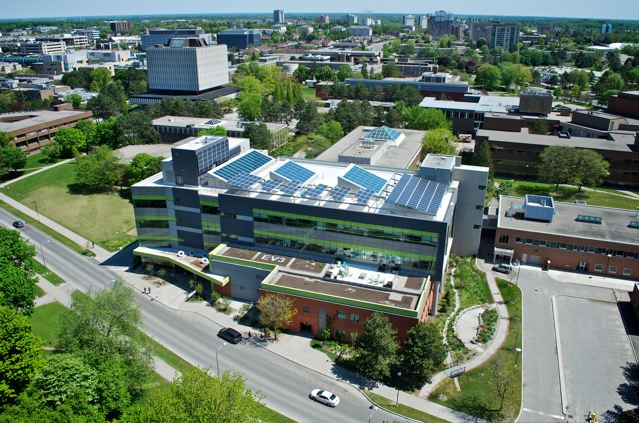 Any construction project earning Platinum status for Leadership in Energy and Environmental Design (LEED) deserves attention and recognition in Canada.

And, with the newest building at the University of Waterloo’s Faculty of Environment achieving such a distinction, the kudos have been quickly accumulating.

But, according to Dr. Paul Parker, Professor, Geography and Environmental Management, at the university, there has been much more accomplished than certification by the Canada Green Building Council (CaGBC), the internationally accepted benchmark for the design, construction and operation of high performance buildings.
“The highlight of the project is the enthusiasm of all the groups involved,” Dr. Parker says of the building, dubbed Environment 3 (EV3). “The starting point is the students, who love a building where they see that the university is ‘walking the talk’ as we convert lectures and lessons about improved performance and low carbon strategies into our practice.”

And Feridun Hamdullahpur, President and Vice-Chancellor at Waterloo, has gone on record as saying “this commitment to real-world impact and transformative change serves us today and will guide our future.
“It is only fitting that a building on the cutting edge of green design be a part of our campus.”

And there are many examples to support that assessment.
Working with Akitt Swanson & Pearce Architects and WalterFedy design firm, Cooper Construction oversaw the design and build of the first LEED Canada Platinum structure at an Ontario university. The call for ideas also went out to students, and they responded with suggestions for the design, use and management of outside areas, green roof and the interior garden courts.
The building also hosts Waterloo’s School of Planning and the School of Environment, Enterprise and Development (SEED), thus making it home to Canada’s only LEED Canada Platinum professional school.
Some of the project highlights include:

Dr. Parker says the project can definitely help develop economic development strategies across Canada.
“The perfect example of this is the honeycomb glazing technology.” he says. “The glazing was developed in a lab here at Waterloo and then a doctoral student graduated and set up a firm to go into production and now they have a growing market, including EV3.
“Similarly, the living wall and green roof are products of local firms. In addition to particular technologies, the whole project reflects our growing emphasis on the knowledge economy as the design, production and installation all require new skills that are in demand as new markets grow for high performance buildings.
“EV3 also reflects the sustainable choice of buildings that have lower operating costs and generate economic benefits for decades into the future.

“In terms of highlights in the building itself, I am impressed by the things that you do not see, like higher levels of insulation and attention to detail in air sealing.  Of course, generating on-site energy with the solar panels is a visible example of where we see all buildings going.” The account team from Siemens, led by Jack Rendulic, was intimately involved in the design process to ensure that the building automation systems were optimized for this key project, says Joseph Caranci, Siemens Area Manager for Central Canada. This project also represented the first deployment of Siemens EMC Software for the University of Waterloo. Siemens EMC is a flexible remote hosted monitoring service that provides comprehensive, easy-to-use reports on the building’s energy performance — allowing U of W to easily measure and verify the energy performance, and to make informed energy decisions for the building. Caranci says Siemens is “proud of our long-standing partnership with the University of Waterloo, and we are very happy to recognize their achievement with this sustainable new building.”