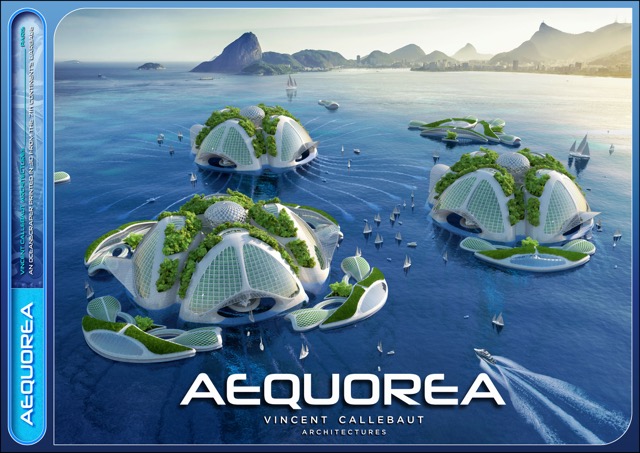 Hi People of the Land. My name is Océane. I’m 15. I’m what they call an aquanaut teen. I was born in immersion in 2050 in an underwater farm called Aequorea off the coast of Rio de Janeiro. Bio-inspired, the farm draws its name from a bioluminescent, light-emitting jellyfish characterized by its articulated, webbed tentacles. These tentacles enable it to swim and ensure its stability, while producing its own energy.

My grandparents are oceanographers and architects. For the past 50 years, they’ve been participating in the collaborative construction of Aequorea. It’s a genuine underwater village printed in 3D from algoplast, a composite material they invented that mixes algae with garbage from the seventh continent. You know, the seventh continent? That infamous soup of plastics formed at the beginning of the century in the heart of the five main ocean gyres, where the Coriolis effect causes the currents to swirl. In the 20th century, on Earth, every human was producing up to 10 times their weight in garbage annually. Two hundred and 69 million tons of plastic waste with a life expectancy of a thousand years were thus produced every single year, and more than 10 per cent of it was ending up in the oceans.

Well, my grandparents, together with a community of scientists, decided to extract value from this disgusting soup of petroleum-based waste by recycling it. They formed an NGO to defend an ethical approach to the oceans. As soon as 2015, they began the repurposing of plastic waste dumped by the People of the Land into impervious, durable materials.

Faced with climate change and the rise of water levels, a new civilization emerged: the People of the Seas. Once their lands and islands were under water and salinized, a large portion of the 250 million climate refugees got involved with interdependent NGOs like the one my grandparents created. Together, they invented new underwater urbanization processes that were energy self-sufficient, recycled all waste, and fought ocean acidification. The People of the Seas’ objective? To explore the abyssal zones in a respectful way, in order to speed innovation and to massively democratize new renewable energies. This community fought the capitalist frenzy rubbing its hands at the idea of plundering the last petroleum, ore and methane resources through drilling and fracking natural habitats at great depths; to develop new scientific, energy, pharmacological and food resources unsuspected until then: such was their credo in 2015.

For the past 50 years, these inhabitants of the sea managed to revolutionize the way we live together through environmental resilience and intensive energy transition. They won the challenge of recycling 100 per cent of the seventh continent’s plastics into a sustainable habitat. Each Aequorea village can welcome up to 20,000 aquanauts. Their main access is on the water surface, through four marinas covered with a mangrove rooted on a floating dome 500 metres (1,640 feet) in diameter. Modular living, co-working spaces, fab labs, recycling plants, science labs, educational hotels, sports fields, aquaponic farms and phyto-purification lagoons stack up layer by layer.

So let’s jump in the water! There’s no longer any need for scuba tanks to breathe underwater: put on your gill mask, designed to capture water and extract oxygen molecules; your microbead suit, like a dolphin skin; and your carbon fibre monofins inspired by whale tails! There’s no more need for coal, oil, gas or nuclear energy to get light: we reproduce bioluminescence in the double glazing of our apartments, thanks to symbiotic organisms that contain luciferin which emits light through oxidation. On the ocean floor, a field of water turbines, shaped like volutes and laid out in a star pattern around an abyssal scientific base, turn the sea currents into electric energy. An ocean thermal energy conversion (OTEC) power plant completes the panel of energy supply.

In order to produce drinking water and fresh water for aquaculture, the OTEC power plant uses the in-depth pressure to counteract the osmotic pressure, and to separate the water from the salt via a semipermeable membrane. Air is renewed, either naturally by convection through wind chimneys innervating the four branches of each tower’s twist, or by the oxygen station via seawater electrolysis. For heating and climate control, we no longer use fossil fuels. Rather, we use microalgae grown in aquarium walls, which absorb the carbon dioxide produced by people’s breathing. These green-algae-based bioreactors also recycle the liquid or solid organic waste, and produce energy through photosynthesis and biomethanation.

For food, we grow algae, plankton and mollusks rich in minerals, proteins and vitamins. Coral reefs are harvested on balconies, thus becoming nurseries for the aquatic fauna and flora. On the surface, the four large floating conch-like structures house community horticultural greenhouses, organic farming fields, orchards and vegetable gardens. We live from sustainable fishing in our apartments’ garden, i.e. the ocean.

We move around by ship or submarine, thanks to the algae fuel or hydrocarbons we produce free of greenhouse gas emissions. We make our biofuels by extracting hydrogen and carbon from seawater through osmotic pressure, then synthesizing them.

We study the molecules of living organisms to heal ourselves. We only use bio-based materials to lay out and furnish our apartments.

Oh, I almost forgot to tell you about the most important change! We went through a real economic Big Bang, because we also created a currency specific to marine urbanism: the Aequo. No more bosses. No more employees. We’re now all eco-conscious individual entrepreneurs.

Never forget this: oceans produce 50 per cent of our planet’s oxygen. They are its most active lung. It was really worth cleaning them, and fighting their acidification, thus re-enchanting our living together – don’t you think?