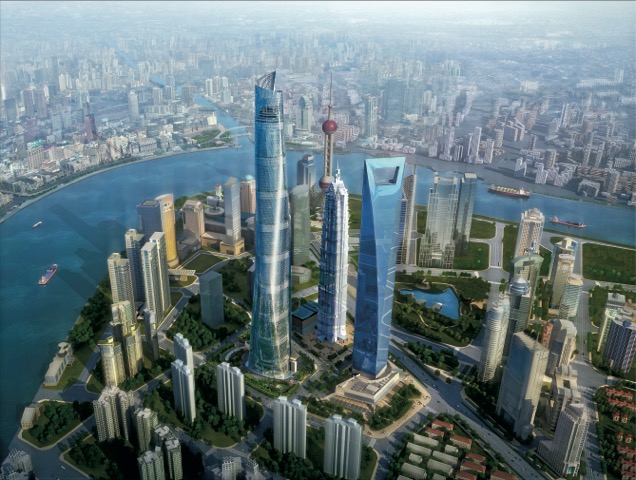 Much has been made about the sheer magnitude of the Shanghai Tower, touted as the tallest building in China, and second-tallest skyscraper in the world.

Due for completion in 2015, this spiraling megastructure will soar 2,074 feet (632 metres) into the skyline in Shanghai’s Lujiazui commercial district, right beside two other building behemoths: The Jin Mao Tower and Shanghai World Financial Center. Not to be overshadowed, however, is the fact the tower will be targeting a China Green Building three-star rating and LEED gold certification from the U.S. Green Building Council. And that’s largely due to the fact that sustainability is at the core of the tower’s design.

Dan Winey, of the tower’s Gensler design team, says Shanghai Tower is one of the most advanced sustainable tall buildings in the world, showcasing a number of green technologies. To that end, the results have been noticeable. As the skyline’s most prominent icon, the tower’s transparent, spiral form is showcasing cutting-edge sustainable strategies and public spaces that set new standards for green community.

Sustainability is at the core of the design. The façade’s taper, texture and asymmetry work in partnership to reduce wind loads on the building by 24 per cent, offering a $58-million U.S. savings in overall building materials. The building’s transparent inner and outer skins admit maximum natural daylight, thereby reducing the need for electric light. The tower’s outer skin also insulates the building, reducing energy use for heating and cooling. The tower’s spiraling parapet collects rainwater, which is used for the tower’s heating and air conditioning systems.

Wind turbines located directly beneath the parapet generate on-site power for the upper floors of the building, with a 2,130kW natural gas-fired cogeneration system onsite providing electricity and heat energy to the lower floors. Fully one third of the site will be green space with landscaping that cools the site. Overall, Gensler says Shanghai Tower’s sustainable strategies will reduce the building’s carbon footprint by 34,000 metric tons per year. Overall, the tower has nine cylindrical buildings stacked one on top of the other. The inner layer of the double-skin façade encloses the stacked buildings, while the exterior façade creates the building envelope, which rotates 120 degrees as it rises and provides the distinctive, curving appearance. The spaces between the two façade layers create nine atrium sky gardens. Much like plazas and civic squares in traditional cities, the public sky atria offer spaces for interaction and community gathering space with restaurants, cafés, coffee shops and convenience stores, as well as lush landscaping, throughout. With sky gardens lining its perimeter, the tower is literally enveloped in public spaces.

“With the topping out of Shanghai Tower, the Lujiazui trio will serve as a stunning representation of our past, our present and China’s boundless future,” said Jun Xia, Shanghai Tower design leader and Gensler principal. “This tower takes inspiration from Shanghai’s tradition of parks and neighborhoods, recasting that history in a high-density, urban form symbolizing the emergence of modern Shanghai and China.”