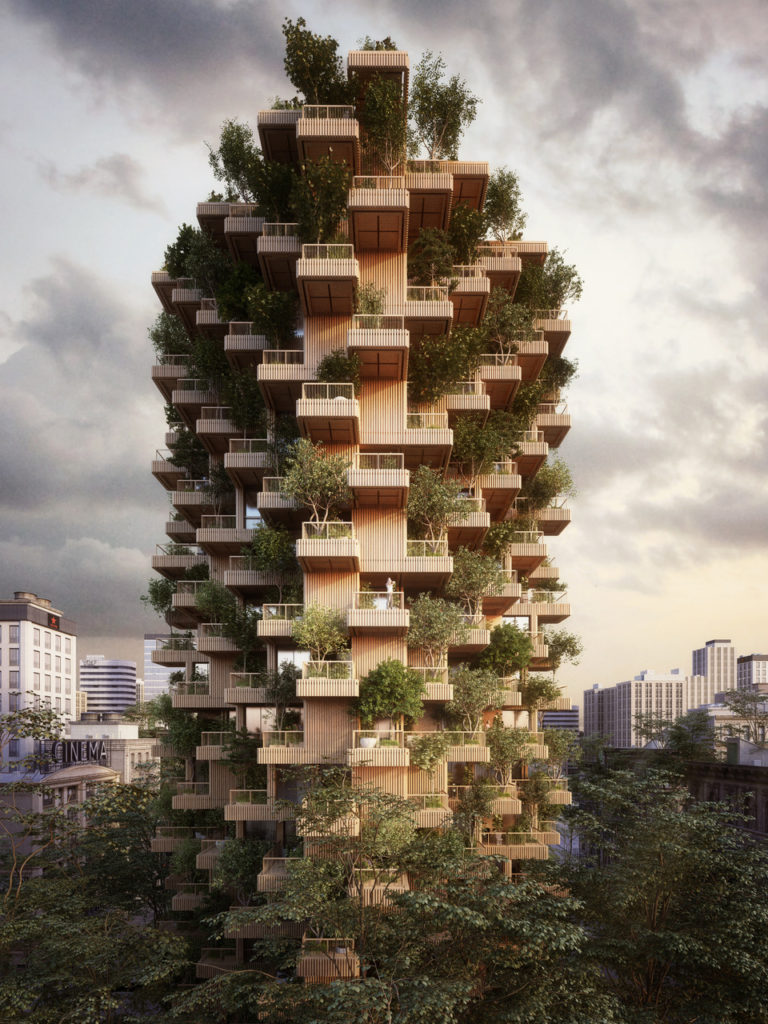 Penda architects have teamed up with wood consultants from CLT-brand Tmber to propose a modular and natural high-rise tower in Toronto.

The Tree Tower Toronto project is seen as a catalyst for future residential buildings that are “more efﬁcient to construct” and “more ecological to our environment” than common construction methods, says a principal at Penda, an international creative team with offices in China and Austria.

“Our cities are an assembly of steel, concrete and glass,” says Chris Precht, partner at Penda. “If you walk through the city and suddenly see a tower made of wood and plants, it will create an interesting contrast.

“The warm, natural appearance of wood and the plants growing on its facade bring the building to life and that could be a model for environmentally-friendly developments and sustainable extensions of our urban landscape.”

The Tree Tower Toronto is a joint effort of Penda, as architects, and Canadian CLT-consultants at Tmber – they envision sustainable high-rise proposals in urban areas. The 18-storey tower in Toronto would be 62 metres high and have 4,500 square metres of residential area and 550 square metres of public area with a cafe, children’s daycare centre, and workshops for the neighbouring community. A location has not been announced.

Due to its natural appearance, the building would shift the usual ‘building to city’ relation to a ‘building to nature’ relation, the principals say. The tower would showcase a direct connection to nature with plants and its natural materials. Canada has a long tradition of wood construction and was one of the ﬁrst countries in the world to change its building codes in order to use wood in vertical structures. That makes Canada a pioneer in adding high rises made out of wood to their urban fabric. As a promotion for sustainable developments, the Canadian government awards buildings that exceed carbon footprint standards. Such credits can reach a 10-20 per cent funding of the building cost and are a direct injection to green light sustainable housing proposals and an incentive for forward thinking developers.

Canada has also been a frontrunner for modular, pre-fabricated construction, which was efﬁcient on one hand and visually interesting on the other. One great example of this is Moshe Safdie’s Habitat 67. Inspired by the Habitat, The Tree Tower Toronto would involve a modular building process, where pre-fabricated and pre-cut CLT panels would be assembled off-site at an indoor facility. After the work on site, with foundation, ground ﬂoor and a base core is done, all modules, including ﬁxtures and ﬁnishes, would be delivered to the site and craned into place.

During the process of stacking the modules, the timber clad facade panels would be installed and sealed. To go fully modular and prefab, the process would be faster, less noisy, reduce waste and allow for a high degree of quality control; that’s because most parts of the building would be assembled in a controlled indoor environment.

The structure of the building would be mainly massive timber panels with a hybrid of CLT, concrete and steel-elements where needed and could be seen as a prominent statement to use engineered wood products in vertical structures.

“The building constructed in a modular process will become more ﬂexible,” says Dayong Sun, a partner at Penda. “In response to a fast pace of life in the future, the building should meet the user’s demand in a faster and more ﬂexible way. Furthermore, a modular system formed in the city of the future will make the module a part of the shared lifestyle more than the building. This way, the service life of the building module will be greatly increased for sustainable development.”

Furthermore, the modular construction system implements an idea about the reusability of building components in an afterlife of a tower. Elements of a building like wires and copper will be scarce resources in the future. Demolishing a tower in the conventional way ends up burying the most valuable elements of a building. Instead, think down-constructing a tower – that helps secure a sustainable life cycle of a building, project principals say. Wood as a Building Material

Wood is an old building material that has been getting a new life in taller buildings over the last ﬁve years. Building with engineered wood has been called the next tidal wave of building in the 21st century. A quality lifestyle, the principals believe, means living in healthy environments. That also means living in a healthy city.

The building industry is by far the biggest contributor to pollution, they point out, and solutions for more ecological buildings need to be actively sought and legislated. Because buildings account for almost half of all energy used worldwide, the quintessential focus of the design community has to be on strategies to reduce the energy consumption in buildings and in their construction. The process that creates structural engineered wood products takes far less energy than steel, cement or concrete and produces fewer greenhouse gases during manufacturing. Further, wood stores carbon in itself (approximately one tonne per cubic metre) thus it has, compared to other building materials, a lighter overall environmental footprint. Symbiosis of Architecture and Botany

A key element of the project is to communicate its innovative use of wood and engineered wood technology used in the building, according to principals. The tower would not only use massive wood panels as its main structural element, but would also incorporate timber clad panels as its facade. Despite wood as a structural and cladding material, trees and plants would also be a key component on the building’s facade. Large outdoor areas would provide a space for herb and vegetable planters for the residents. The vegetation on the terraces would offer a private garden for each apartment, which would create a certain degree of privacy within the density of the city. The trees would also provide a shade in summer and help to keep the temperature low on warm days.

Wood as a construction material and trees on the facade offer a unique and coherent ecological design and exhibit a symbiosis of a built and a natural environment, say the principals.
“In a way, we are growing the material for an extension of the tower on its terraces,” says Mark Stein, CEO of Tmber. “This connection helps further develop a true ecological high rise, supplies its residents with fresher air and provides a lower carbon footprint.

“The extensive use of wood would set ambitious sustainability targets and be a catalyst for similar developments in Canada,” Stein added.