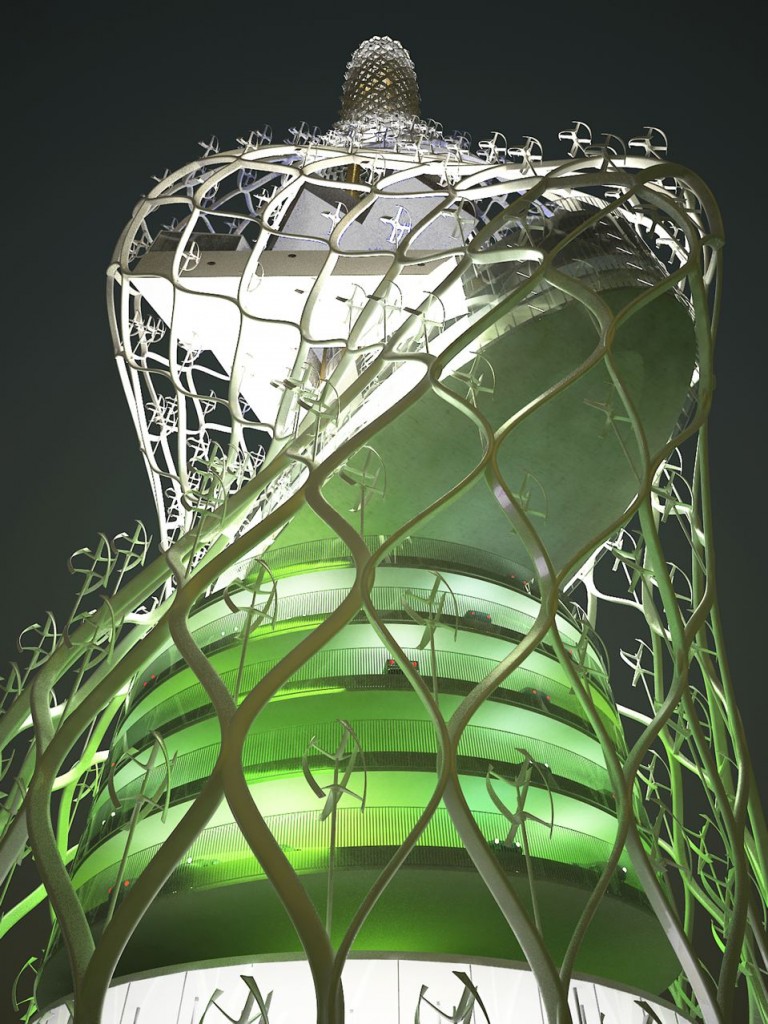 With an eye trained directly on a sustainable future, Amsterdam-based NL Architects has come up with plans for an energy-generating skyscraper that would harness the power of 600 wind turbines.

The project first came to light recently when NL Architects entered the concept – dubbed Tower of Power – in the Taiwan Conceptual Tower International Competition. While its bid did not win, a spokesperson for NL Architects says that there is definite interest in this innovative idea, and they are confident an energy company will help see it through to fruition.

The project would utilize 600 wind turbines to produce six megawatts of electricity. In addition to its renewable energy-generating capabilities, NL’s spokesperson said the landmark tower would provide an observation deck, meeting space, office space, museum, and parking.  The lace-like skyscraper, then, would combine mixed-use space with a productive clean energy source for a city.

“The idea,” the NL spokesperson tells Green Building and Sustainable Strategies magazine,“ is to combine a type of observation tower with wind energy generation, creating a new type of sustainable landmark.  To get that, we would deploy vertical access wind turbines and place them in the intricate ‘lace’ of the structure. Think Eiffel Tower plus wind energy equals landmark of the future.” Inspiration for the Tower of Power design came from a “bamboo basket” concept. There would be a meshed exterior encasing all the of building’s elements. The way the design of the structure weaves in and out would create an intricate pattern and series of spaces that would offer city views. The mesh-like tower would have small vertical axis turbines installed into the façade, all of which would produce the projected amount of clean energy power.

The gaps between the mesh would provide the space needed for the installation of the 600 wind turbines. The turbines, says NL Architects, would be quiet and sculptural, as opposed to larger, noisier alternatives.

In its brief to the Taiwan competition, NL stated: “Tower of Power is not just a symbol of good intentions; it actually produces green energy. Instead of being yet another ‘empty’ icon, it actually is a usable object. “Next to its required functionality as sightseeing tower and telecommunication base, it is an environmentally-friendly power plant.  And Tower of Power is also an attempt to investigate how power plants of the future can be turned into objects of beauty.”