Top of the world 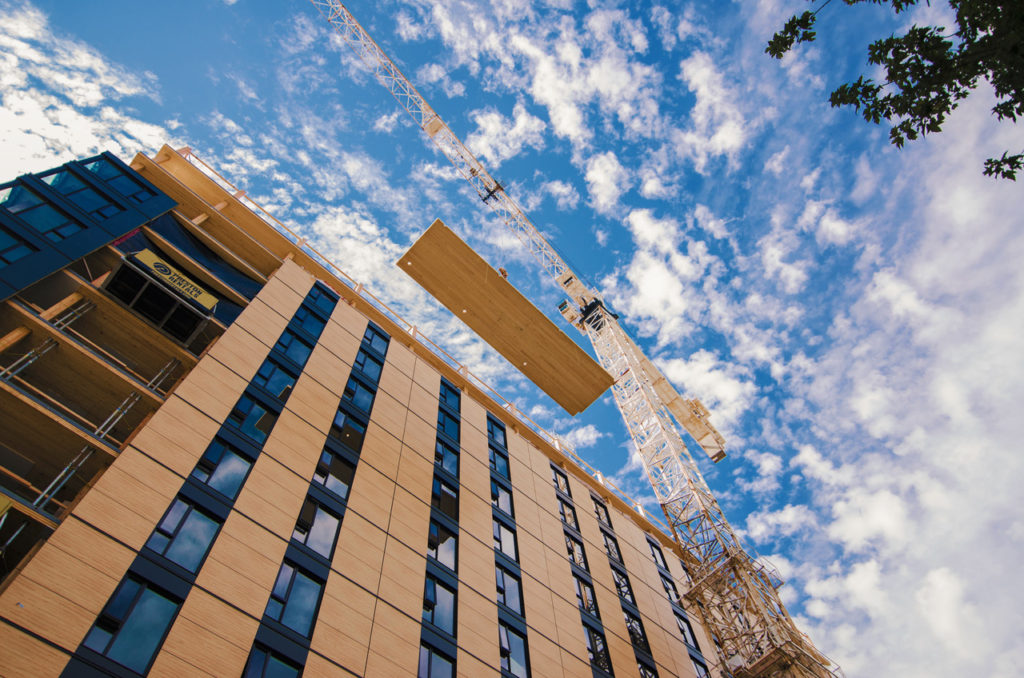 Top of the world

It can be easy to get caught up in all the hoopla about the tallest wood building in the world being built in Canada, at the University of British Columbia.

Yes, the mass wood structure and façade has been completed for UBC’s Brock Commons student residence, with interior elements soon to follow, and it’s 18 storeys high. That, in itself, is impressive. However, the fact that the basic construction came in at four months ahead of schedule might be even more extraordinary.

Time, as they say, is money … and that especially holds true in the construction industry. So, yes, the world-record height is something for all Canadians to be proud about, but the hybrid building appears to represent much more.

“This remarkable building, the first of its kind in the world, is another shining example of Canadian ingenuity and innovation,” says Jim Carr, Canada’s Minister of Natural Resources. ”It’s an apt demonstration of how Canada’s forest industry is finding new opportunities through technology and innovation — opening up a world of possibilities for our forest and construction industries.” The structure was completed less than 70 days after the prefabricated components were first delivered to the site. And Brock Commons is the first mass wood, steel and concrete hybrid project taller than 14 storeys anywhere in the world. The building has a concrete podium and two concrete cores, with 17 storeys of cross-laminated timber floors supported on glue-laminated wood columns. The cladding for the façade is made with 70 per cent wood fibre.

The $51.5-million project was designed by Acton Ostry Architects of Vancouver with Architekten Hermann Kaufmann of Austria as tall wood advisors, Fast + Epp as structural engineers and GHL Consultants Ltd. as the fire science and building code consultant. A key mandate for the innovative project was to demonstrate the viability of mass wood structures for B.C.’s development and construction industries. This was achieved with a hybrid design that combines the benefits of mass wood and concrete to achieve an economical structural system that is comparable in cost to that of traditional all concrete and steel structures.
Part of the design and construction strategy was recognizing that the level of prefabrication available in B.C. is not as extensive as that which is available in Europe. However, the speed and skill of high-rise residential trade contractors in Vancouver proved to be considerable.

To test the speed and efficiency of the erection of the mass wood hybrid structural system, a full-scale two-storey proof of concept mock-up was constructed in July 2015. Erection of the structure went smoothly and assembly proved to be faster than was initially projected. Brock Commons has been designed to target LEED Gold certification and to conform to ASHRAE Standard 90.1-2010. The building will connect to the UBC district energy system and is projected to achieve up to 25 per cent energy savings over a typical building of the same use.
“Brock Commons will demonstrate that mass wood structures offer an economically viable alternative to concrete and steel while providing a way to lessen the carbon footprint of the built environment,” says Russell Acton, Principal at Acton Ostry Architects.