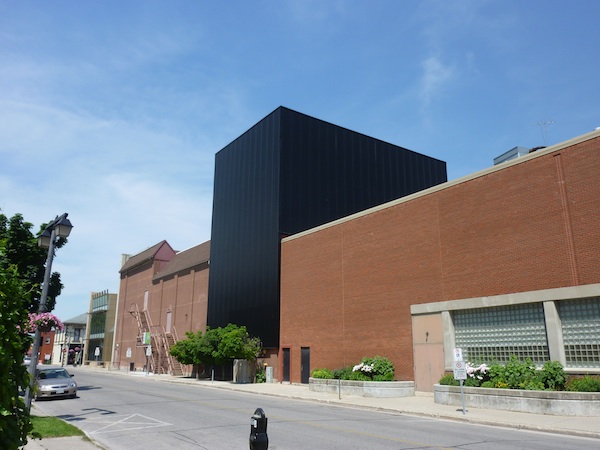 Next time you travel to Stratford in southwestern Ontario to get your fix of Shakespeare, look carefully at the walls of the Avon Theatre. Not only does the black cladding stand out visually, but it’s tapping the sun to heat the building.

Conventional fuel-based heating systems pipe in cold outside air and then warm it up. On the other hand, solar air heating systems like the one lining the Avon Theatre convert solar radiation into hot air before it enters the building and reaches indoor heating and ventilation equipment.

It’s designed to reduce fuel consumption and energy costs, it’s used in buildings around the world, and it’s Canadian.

“Solar air heating offsets the heating load on a building and is used primary in commercial, industrial, institutional and agricultural applications,” says Victoria Hollick, vice-president of operations with Conserval Engineering in Toronto.

Conserval is credited with inventing the technology back in the 1990s and holds various patents under the trade name SolarWall.

While the name implies a wall-mount, SolarWall systems can also be placed atop a roof. In either case, it needs a metal exterior panel to allow the heated air to travel inside.

Systems can even be combined with photovoltaic panels to create a hybrid system generating both heat and electricity.

SolarWall systems have seen duty in more than 33 countries, with end users as diverse as Toyota, Wal-Mart and the U.S. military. However, it makes perfect sense that SolarWall was invented in Canada – indoor space heating represents the largest chunk of energy used in buildings in our northern climate, at between 40 and 60 percent, according to Hollick.

She adds that SolarWall systems typically save between 20 to 50 percent of a building’s heating costs. “Any building that has a heating demand has potential application,” Hollick says. “The capital costs are significantly lower than any other renewable energy technology out there, and we’re able to convert up to 80 percent of the solar resource into energy.”

Conserval was formed in 1977 with a view to conducting energy audits for large industrial buildings such as those owned by auto manufacturers. Solar technology had begun to flourish in the early 1980s, thanks to government incentives, but the programs ended and Conserval responded by looking at issues associated with indoor ventilation. This led to a precursor to the SolarWall technology, and the rest is history.

Over the years, Conserval has built its Canadian user base, looking to unconventional markets such as agriculture. “Animal barns have high ventilation, high air turnover, so we’re helping to heat that air and, in turn, reduce their propane costs,” Hollick explains.

Multi-residential buildings such as apartments and public housing are also prime candidates, especially if they need to be reclad. “Instead of putting up regular metal siding which has no energy benefits, they can put up a SolarWall system,” Hollick says.

At the Avon theatre in Stratford, Solar walls cover the south, west and east-facing walls. The 2010 installation, part of an overall building upgrade, is projected to reduce more than 28,000 cubic metres of natural gas consumption annually, reduce heating costs by $7,000, and save 59 tonnes of greenhouse gas emissions, according to Conserval.

Other recent projects include the Canadian Centre for Mineral and Energy Technology building at McMaster University in Hamilton, which is seeking LEED Platinum certification through the Canada Green Building Council, and Goodyear Tire in Medicine Hat Alberta, where manufacturing operations boost high ventilation requirements and, consequently, heating needs.

While Canadian-based, Conserval Engineering has taken a decidedly international approach. In 1990, it opened Conserval Systems, a subsidiary based in Buffalo, N.Y., and in 2009 formed SolarWall Europe, which operates from Paris and manages the company’s direct sales and dealer network across the pond.

This past year, Conserval completed two projects for Toyota in Europe – a roof-mounted system to help heat a car dealership showroom in Spain, and a project for Toyota Manufacturing in France.

“They’re bringing in air and then exhausting it,” Hollick explains. “They’re large users of energy, and they have a corporate mandate to undertake these types of initiatives.” The ongoing drive to reduce costs and carbon emissions stands to help technologies such as SolarWall.

“People think of automobiles as being the Co2 polluters, but in the developed world the bulk of Co2 emissions come from heating, cooling and powering buildings,” Hollick says. “The most efficient way to help buildings tackle Co2 is to help them reduce their carbon footprint, and heating is a huge part of that.”