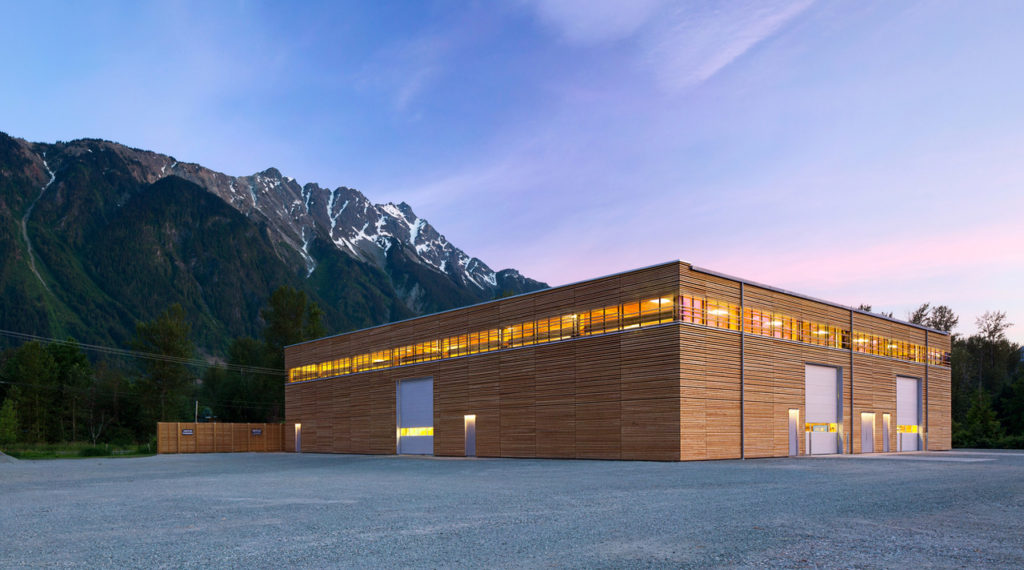 The April 2016 signing of the 21st Conference of Parties (COP21) summit accord represented a universal agreement on climate change, and subsequently brought with it new opportunities for wood in construction and design.
How are the COP21 and wood related? Various national, regional and local government policies are targeting embodied carbon footprint reductions from construction activities. Reducing embodied greenhouse gas (GHG) emissions becomes a critical factor in construction material selection since these decisions have both immediate and long-term effects on the environment. Wood building products represent a solution to architects, engineers and other stakeholders in the design and construction community who are being asked to understand and realize the climate change goals set out by the shifting regulatory and policy framework throughout Canada and the world.
Construction and operations of the built environment constitute the single greatest consumer of natural resources, including energy. In examining the global factors impacting climate change, it becomes apparent that changes to our built environment are necessary – both in operational efficiencies and reductions in embodied impacts.

Understanding how wood use can play a role in mitigating climate change, coupled with a clear appreciation of the decarbonization initiatives and requirements affecting the built environment, will better enable designers to position their work as a solution that meets the needs of a multitude of stakeholders.

A sustainably managed forest is a carbon sink; wood sequesters carbon; and wood can play an important role in displacing GHG emissions through material substitution, where opportunities exist.

Sustainable forestry – Canada is recognized as a world leader in forest management, using science-based principles that balance environmental, social and economic considerations; resulting in an impressive 166 million hectares of forest independently certified, which is about 40 per cent of all the certified forests in the world. Canadian Certification in the Global context.

Carbon sink and sequestration – Photosynthesis converts atmospheric carbon dioxide (CO2) into the simple sugars used by trees to produce long-chain polymers called cellulose, the building block of all wood. Since wood is approximately 50% carbon by weight, one tonne of wood contains approximately 500 kilograms of carbon, which corresponds to about 1.8 tonnes of CO2 equivalent. In effect, nature has already given us a superb weapon to reduce atmospheric GHGs – trees; solar-powered carbon dioxide-sucking machines that store energy in a building material.

Carbon substitution – By replacing one material with a less GHG-intensive one, it is possible to displace and reduce carbon emissions by material substitution. Wood is the only major building material that has the ability to remove more carbon from the atmosphere during the growth phase than is emitted during the raw materials extraction, processing and transportation phases combined.

Canada has 10% of the global forestland base, the second largest in the world after Russia, and is the world’s largest exporter of forest products. It is also, on a per capita basis, one of the largest emitters of CO2. As such, it has both an opportunity and a responsibility to take carbon emissions reductions seriously.

When Canada signed the COP21 agreement to reduce the country’s carbon output, this signalled a shift in priorities, which has been recognized by provincial and municipal governments across the country. At present, British Columbia and Alberta have both implemented a provincial carbon tax of CAD $30 per tonne, the highest in North America. Québec and Ontario have implemented cap-and-trade programs and the Government of Canada has also pledged to significantly reduce its carbon emissions by 2030 and beyond.

Regions and cities are also taking steps to address GHG emissions reductions. The City of Brussels in Belgium, the political capital of Europe, was the first city in the world to require passive-level performance for all new construction and major renovations as of January 1, 2015. While not specifically addressing embodied emissions, the move to passive-level performance creates opportunities for wood use, especially in the design and construction of building envelopes with high thermal resistance.

As well, the City of Vancouver, in its quest to achieve net zero energy and carbon, recently passed a requirement that all new rezoning and affordable housing projects provide information about the embodied impacts of the project – a first for North America.

Canadian research indicates there is an increased benefit to climate change mitigation by reducing emissions today rather than reducing emissions in the future. Just like a retirement savings account, the first monies invested have greater benefits over time than later contributions.

When it comes to carbon impacts, time really does matter.

First, at the point a building becomes occupied, all of the carbon impacts associated with the manufacturing of the components and assembly of the building have already occurred. They are done and there is no going back. It is only when occupancy occurs that the carbon emissions associated with building operation begin. It may take several years before the cumulative operational emissions are equivalent to the embodied emissions; and the higher the operational performance level of the building, the longer it will take to reach parity with the embodied impacts.

Secondly, as many scientists fear, if a carbon tipping point is likely or even inevitable, then the emissions we avoid today are even more important than those we hope to avoid in 20, 50, or 100 years.

‘The conclusion that CO2 must be reduced to a level <350 ppm was startling at first, but obvious in retrospect. Earth’s history shows that an atmospheric CO2 amount of say 450 ppm eventually would yield dramatic changes, including sea level tens of meters higher than today.’ James Hansen on Climate Tipping Points and Political Leadership

Designers have both a responsibility and an opportunity to undertake more accurate evaluations of the embodied impact of the structures they design. As governments around the world take steps to implement regulations aimed at reducing GHG emissions, designers of wood structures will find future legislation and policy to encourage the use of wood in the built environment. Understanding how wood can fulfil regulatory requirements, societal aspirations and environmental imperatives surrounding carbon reduction will tremendously increase the potential for wood use in the near- and long-term.