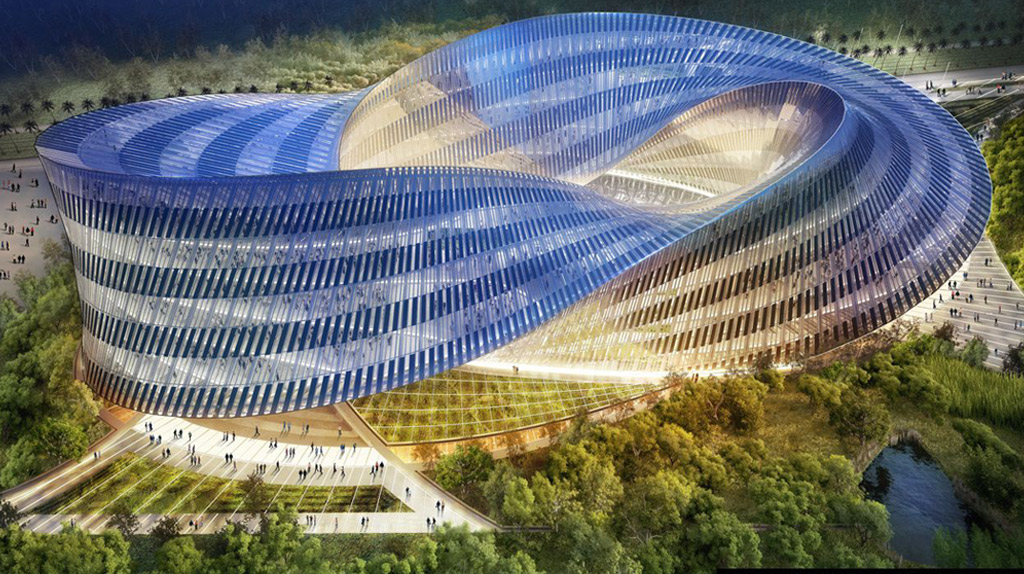 At the North end of the new « Gateway Park » located on the site of the old airport of Taichung city, the “Swallow’s Nest” project is a true entrance door to the new urban ecosystem. Actually, the project develops itself under the shape of a three-dimensional Möbius’ ring that extrudes its triangular section around an elliptic path. This organic building is thus created by the simple repetition of a standardised section that turns eighty times clockwise by 4.5 degrees to make a full revolution of 360 degrees around a huge central patio, the “Endless Patio”. The architecture is inspired by the nature and seems to grow harmoniously such as a plant from the earth to the sky. This pure shape in horizontal spiral enables to create three huge vaults, true connexion hubs between the central patio and the cultural centre, the city and the park.

Like a dynamic and innovative cultural center dedicated to the Fine Arts and Literature, the Swallow’s Nest is thus a new icon of spatial transversality and cultural transdisciplinarity! It is a raw diamond cut into the crystal whose sharp voluptuousness magnetizes the site from its spiral curves.

The Swallow’s Nest is the future landmark of the Gateway Park. The project is thus crystalline assuring a maximum of transparency and lighting effects by the treatment of façades, from the integration of renewable energies, intelligent glasses and effects of progressive translucency. Actually, the glittering skin is made of E-Low glass with high rate of thermal isolation. Like a musical score opening out along the glass ribbons, pixels of photovoltaic solar cells and panels of translucent glass and stainless steel assure 50% of opaque façades in order to avoid greenhouse effect on the one hand and to protect the exhibited works on the other hand.

From the Endless Patio, the Gateway Park or the Gateway Park Avenue 2, the facades create mirror effects by reflecting the rustles and the vibrations of the city and of the surrounding nature. These façades question us by transforming themselves in mirror of our society and act as a spectre for the creation of the contemporary art and for the protection of the knowledge. At daytime, the adjusted surfaces of the façades degrade the azure blue towards the tender greens of the luxuriant vegetation of the park. Whereas during the night, the Klein blue of the stars reverses progressively to gold colour of the dawn and the lights of the urban lighting

The new centre of Taichung has been transformed into a nest of preservation and cultural creation that sees the birth of history in real time, the sensitivities and the Taiwanese philosophies mixed worldwide. In this sustainable architecture dedicated to the biodiversity and the right balance of the action of Human being on Nature, the museum intertwines in the library, the plant embraces the mineral, and the shadow mixes up with the light. The swallow’s nest is a glittering landmark which expresses with elegance the swirling of the imagination. Like the Möbius’ ring, it is a cultural centre without end which will constantly question, intrigue and attract the attention of its visitors.

One swallow made a spring!