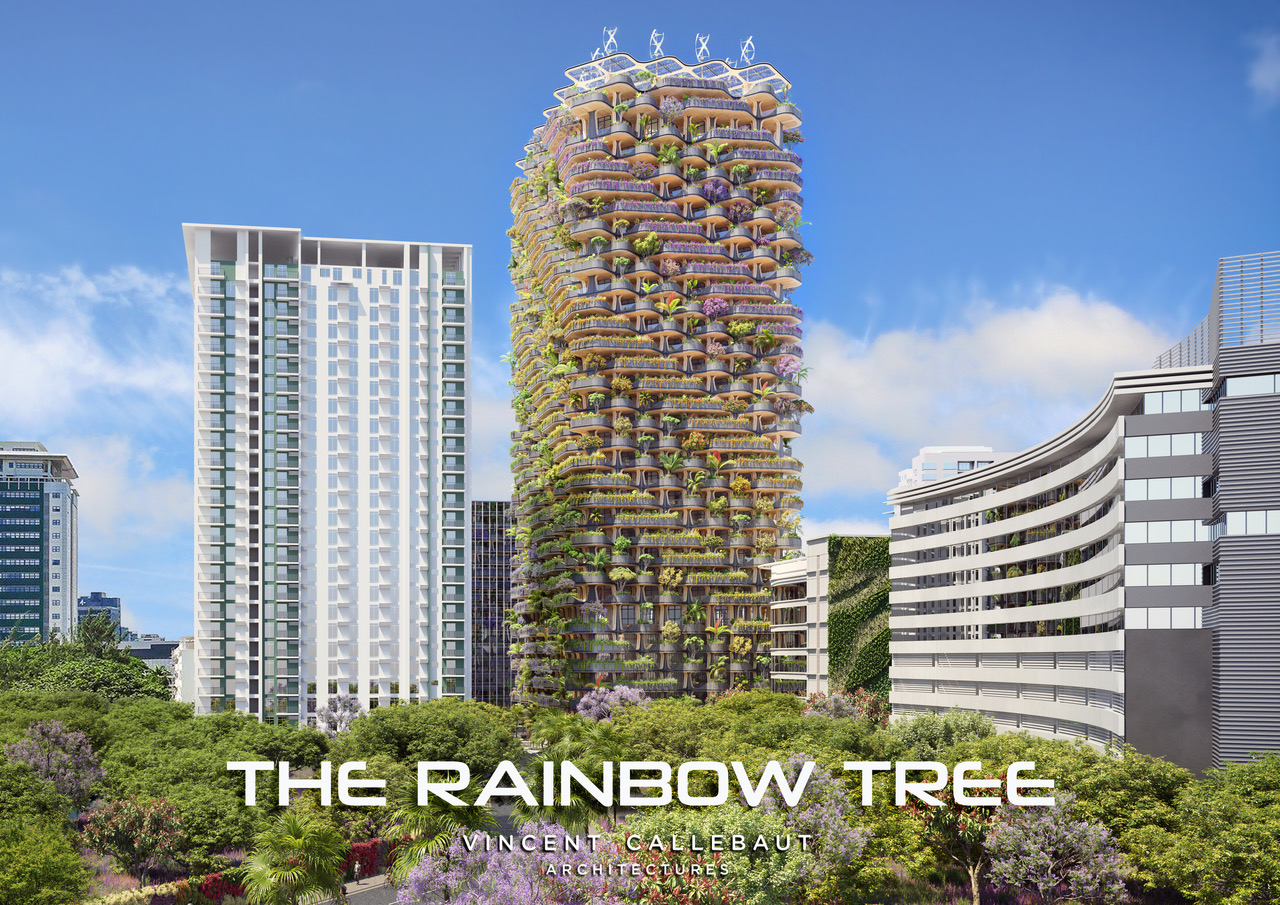 A MULTIPLE ARCHITECTURE REVEALING THE CULTURAL AND NATURAL FILIPINO HERITAGE

In the heart of East Asia, Cebu, in Cebuano Sugbo,is one of the largest islands in the Philippines. The eponymous capital of the Visayas province – Cebu City – is the oldest city in the archipelago. It was the first Spanish colony and was previously discovered by Portuguese explorer Fernando de Magellan in 1521. Cebu City is now the main maritime shipping port and the main economic business center specializing in the New Information and Communication Technologies (NICT) sectors. The project is located inside the 50 hectare Cebu Business Park at the corner of Samar Loop and Avenue Cardinal Rosales. The objective is to construct a residential building with double environmental certification (LEED + BERDE) which offers the perfect balance between mixed cultural heritage and natural heritage of unparalleled splendor.

Looking for radical solutions to reduce the global carbon footprint, Vincent Callebaut Architecture has designed a 32-story, 115-meter high tower built of solid wood, as it is theonly natural, abundant, and renewable material. This organic tower integrates the principles of passive bioclimatism and advanced renewable energies. It was named “The Rainbow Tree” because it is an ode to Eucalyptus Deglupta, also known as Rainbow Eucalyptus, an iconic and colorful tree from the Philippines. “The Rainbow Tree” tower is adorned with the most beautiful plant essences from the neighboring tropical forests. This luxuriant dress of more than 30,000 plants, shrubs, and tropical trees draws a flourishing spiral in the colors of the rainbow and brings a breath of freshness to the heart of Cebu Business Park which is mainly built of concrete and steel.

The Rainbow Tree is a staggered geometric stack of 1,200 modules, each with sides measuring 4 meters sides and a height varying between 3.2 to 4.8 meters. All these mass timber modules are prefabricated and standardized in a factory with a very high degree of precision. They are directly inspired by the “BahayKubo” (literally, cubic houses, also known as “Nipa Huts”). These indigenous nomadic houses were made of natural materials from the forest such as wood, bamboo, and palm leaves. Before the arrival of the Spanish colonizers with their stone-base constructions, this traditional Filipino rural house originally rested on stilts and was anchored to the trunk of trees near the rice fields, coconut palms, and orchards.

These bio-based “Bahay Kubo” breathe! They are in symbiosis with nature. Their architectural identity reveals that they are based on ventilation, large open interior spaces, and terrace networks adapted to the tropical climate.  These three foundations are the basis of our architectural concept for building a CLT (Cross Laminated Timber) tower. Invented in the 1990s in Austria and Germany, this construction technique consists of superimposing perpendicularly wooden slats and connecting them together using structural, now-organic adhesives such as tannins, lignin, cellulose, or even starch. Being built from trees cut and harvested in short circuits in the archipelago in the heart of eco-responsible forests – where a cut tree is equal to a replanted tree – means that the Rainbow Tree is a real carbon sequestration well. In fact, during the growth of trees through natural photosynthesis, the stored carbon is found “trapped” in solid wood and is therefore not released into the atmosphere. For 1 ton of wood produced, about 0.9 tonnes of carbon is confined.

This means we are talking about a building with a negative carbon footprint!