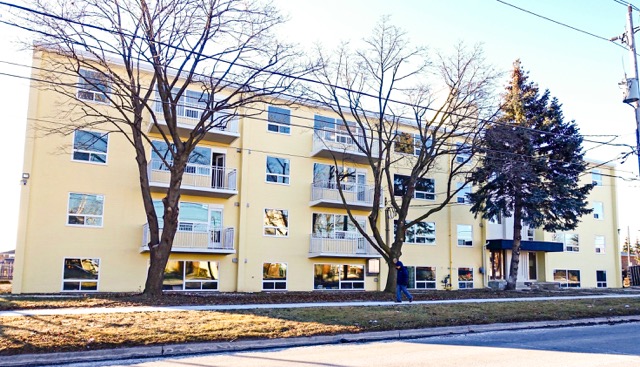 It’s true that PCMnow.com Inc. is made up of a team of dedicated professionals who consistently deliver luxury homes to clients demanding the highest level of quality, workmanship, timing and on-budget completion.

But sometimes there are other property management challenges for PCMnow.com Inc., the Oakville-based company that prides itself on unparalleled uniqueness, and attention to detail … all with no surprises for the client.

Case in point – the renovation of a 60-year-old apartment building, which was in a “terrible state,” says PCMnow.com Inc. President Carlos Jardino.

“There were many leaking pipes and plenty of waste in water, gas and electricity consumption,” recalls Jardino. “We had a flood of work orders for clogged pipes, for ceilings that were falling down due to the large amount of mould caused by many water leaks, condensation and lack of ventilation. That, plus the heating system was extremely old and inadequate, the whole building was full of pests, roaches and bedbugs – you name it, it was there.

“The living conditions were terrible to say the least.”
Insurmountable? Not for PCMnow.com Inc., which came up with a plan to improve the building on all levels – from mechanical and electrical to plumbing and environmental. But the renovation had to reflect good business sense, as well, and PCMnow.com Inc.’s due diligence made sure the building’s owner was well-served in that regard.

“The capital improvement project would, in the end, have to pay for itself or the other solution would be to demolish the building,” Jardino says.

A thorough audit on the consumption of energy, water and overall efficiency of the building, plus an environmental assessment, was conducted. The result, Jardino says, was a conclusion that, in most cases, the building was consuming well over seven to eight times more utilities than the industry standard. There were other problems to consider, as it turns out, but the bottom line is PCMnow.com Inc. came up with a viable plan of action.

“At least we identified the majority of issues and, like the saying goes ’50 per cent of the solution is knowing what the problem really is’… and now we know.” Before construction could begin, all existing tenants needed to leave the premises. PCMnow.com Inc. negotiated acceptable terms with all tenants over just a few months. Then PCMnow.com Inc. looked to its project and construction arm to look after custom building needs.

It took them eight months to get through the pre-construction stage – which included construction planning efforts and coordinating legal efforts. Then they began demolition of the fourth floor of the building and the construction of two pilot units.

“These pilot units were done so that the builder could learn more about the actual construction,” explains Jardino. “It became very obvious after starting that all of the plumbing, electrical wiring and HVAC had to be completely replaced.”

They found that many existing partition walls also had to be demolished and replaced. At the same time, drilling of the exterior wall had to be done in order to introduce various levels of ventilation.

“As well as placing new air-conditioning units, along with new blown air heating units, old windows were thrown out and replaced with new Energy Star windows,” says Jardino. “All in all, we basically kept the existing shell of the building and absolutely everything else was replaced, including doors, hardware, appliances and so on. Jardino says there are other green elements throughout the project, including LED lighting, environmentally-friendly paint to replace the old lead paint and the planting of trees.

“Approximately $120,000 was spent per unit, or well over $3-million in total,” Jardino points out. “The result is a building that will have a much, much smaller carbon footprint, spend substantially less on utilities and have a much-improved living environment, equal or surpassing brand new buildings.”

The bottom line, he says, is that the renovated building will not require any capital improvement projects for the next 15-20 years.

“This means there will be very low maintenance, as well,” says Jardino. “There’s a five-year builder warranty included, as well, something you don’t see in the industry. And the building has started to get its first tenants, making the entire turnaround time just under one year.

“The owner is happy with the outcome of the project and it’s a true triple win – Win/Win/Win for Planet + People + Profit.”

The starting point for PCMnow.com Inc. is always a holistic, realistic and transparent budget that is understood by both the client and PCM. Without these key ingredients, PCM will refuse to engage in any relationship. And PCM surrounds itself with the best in-class suppliers and associates. Also, President Carlos Jardino is aligned with various charities, most notably the Princess Margaret Cancer Foundation, St. Michael’s Hospital and Bethany Kids.