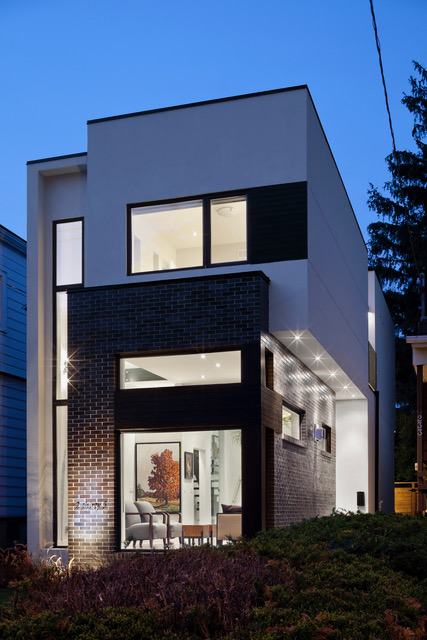 At first glance, an observer could be excused for simply noticing the obvious.

Certainly, the East York Toronto home that’s come to be known as The Linear House drastically stands out from its neighbouring structures, predominantly carryovers from the interwar years of the 20th century.

But on closer examination – and explanation from one of the designers involved in the development of the two-level, 1,600-square-foot residence – it becomes immediately clear that there’s much more to this project than meets the eye.

In many ways, the home represents a sort of case study about housing on tight lots; an experiment, if you will. But, again, that assessment alone would be selling the concept short. This, plainly, is a complex, sustainable example of how a modern, well-lit detached house can be fitted comfortably into a narrow, long lot. “Right from the beginning, we were able to be begin achieving sustainable goals,” says Titka Safarzadeh, Partner in Nano Design Build, who worked on The Linear House with fellow Toronto architect Saled Mahboubi. “And that would be in the site selection. We selected a property in an established community, close to shops and public transportation, which reduced the dependence on car travel.”

And so the work began. It started as a speculative endeavor, with no particular client on board. So Safarzadeh and Mahboubi were able to put their heads together, and one of the first considerations was the use of light – how to make sure the house was properly illuminated … and then some. Part of that process involved incorporating the home’s central stairs’ area into a glass-framed structure capped with a dominating skylight. The result is magnificent, and creates the home’s primary architectural focal point. They ended up with a tower of glass, with the stairwell suspended in it. Top that effect off with a two-storey vertical window and wide horizontal openings and you end up with a brightly lit interior.

“The large windows and all the interior glass shafts are to maximize the natural daylight and ventilation and minimize the need for artificial lighting,” says Safarzadeh. “We also set back the south wall to accommodate more openings to the south. Tying into that, there’s a terrace on the same side on second floor.” At the heart of every design idiosyncrasy was the constant linear consideration. That resulted in a dwelling with continuous clean lines, which help to create harmony, flow and balance.

What they ended up with at The Linear House was a completely transformed two-storey stucco and brick home, starkly different than the modest houses around them. But the resulting home more than illustrates how perceived challenges of building a narrow detached home can be circumvented with an inspired sustainable vision. That vision, as it happens, was motivated by the test presented by the narrow lot, measuring about 20 feet (6.1 metres) in width. But Safarzadeh and Mahboubi were able to create an interior space that actually feels larger than it is, propelled all the while by the constant linear design. The result is a dynamic living space, with an unhindered flow of natural daylight.