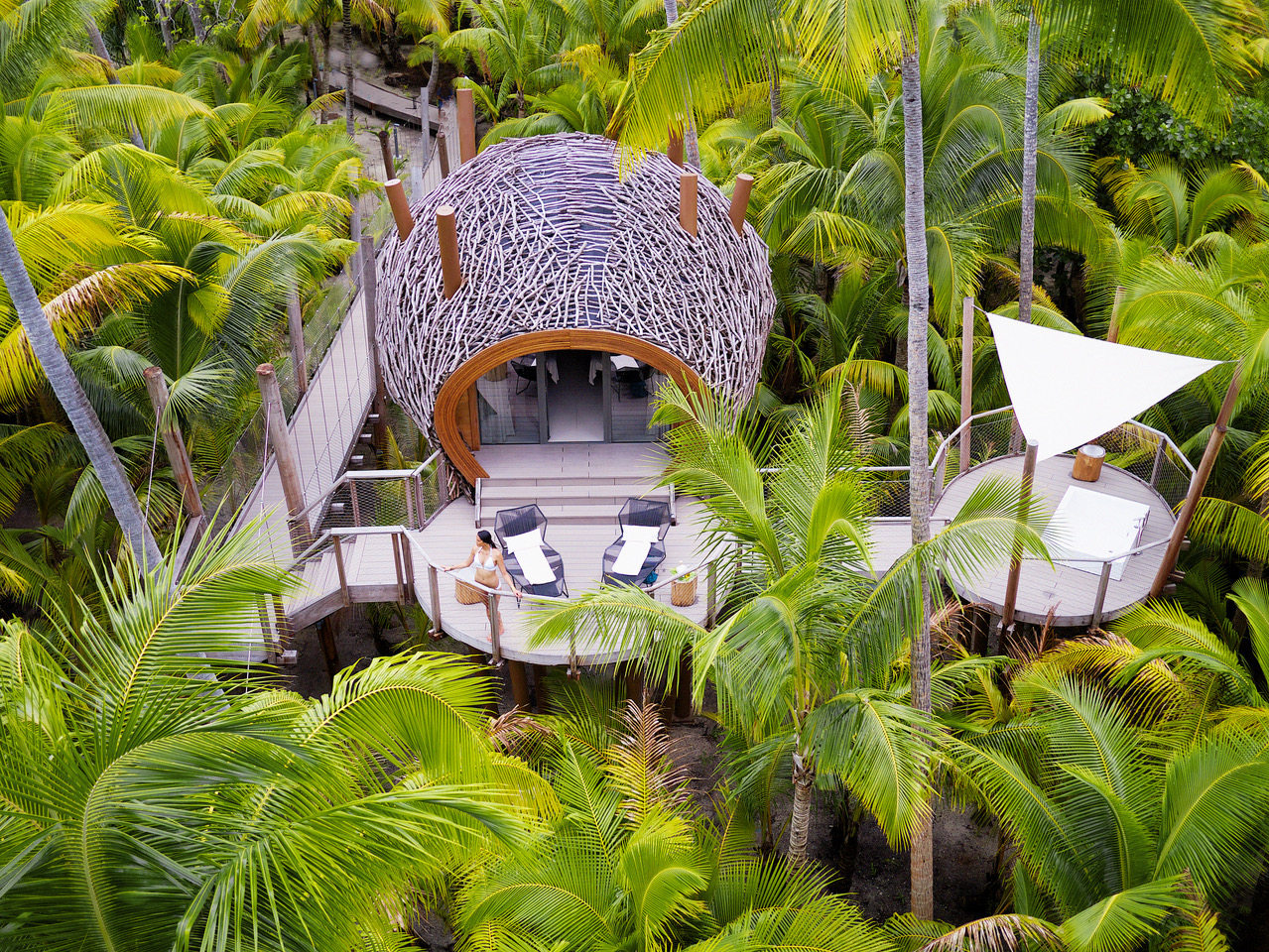 Do you dream of being shipwrecked all alone on a desert island? How you miraculously find everything you need in order to survive until you are rescued. Perhaps you return time-after-time to gather sleep around you.

Actor Marlin Brando had a taste of this after he discovered Motu Onetahi in the Teti’aroa atoll while filming Mutiny on the Bounty in 1960. He built a small village there where he could be alone with his thoughts. This was where he learned to be an early champion of the environment.

His retreat became a modest hotel infused with the spirit of Polynesia by his Tahitian wife Tarita Teriipaia. You’ll find less straight lines in the architecture when you visit. The built environment flows in and out through nature and you are free as a bird to roam.

Marlin Brando left no instruction for what was to become of his Motu Onetahi island after he died. However, developers Teti’aroa Pacific Beachcomber SC have been true to his desire to place a light footprint.

Richard Bailey, their CEO believes “For me, doing well by doing good means making a business out of saving our world and ourselves, one precious island, river, plain, reef, custom, legend, habitat or village at a time.

By offering others the opportunity to enjoy and learn from these things we preserve them, and by preserving them we not only perpetuate our business model, we also build knowledge about why preserving them is so important to our own well-being.”

When we arrive we find a remarkable infusion of a natural retreat coexisting with a center for marine conservation research and education. The Brando Resort is one of the most sustainable places on the planet in true desert island tradition.

It soothes the soul of the rich and famous while helping fund the Teti’aroa Society’s conservation, education, and ongoing scientific research initiatives. This could become a self-fulfilling prophecy for the role of the built environment in a mid-21st century city.

You will not find traditional resort engineering when you arrive. Instead, you will see commitment to the United Nation’s sustainable development goals everywhere you go. They rest on a firm foundation of unwavering dedication to be the world’s first truly post-carbon resort here.

The seawater air-conditioning system creates a minimalist carbon footprint. A food-digesting process returns the resort’s organic waste as compost in a single day. The kitchen garden flourishes in rich black soil overlaying nutrient-poor coral. You will taste the difference when you dine in Richard Bailey’s spectacular success.

However ecotourism is only truly sustainable when it supports the environment within which it finds itself. The low-lying coral reefs surrounding the richly-biodiverse lagoon are close to what Marlin Brando found in 1960 that opened his eyes.

The eco station on Motu Onetahi is therefore a perfect observation point for observing the effects of climate change while reducing the impact of the other factors affecting the natural environment.

However, the impact The Brando has on the lives of the surrounding Polynesian people is perhaps its greatest success.  It invested eighteen month’s hospitality and tourism training in its people before it opened its doors. Some 80% of employees are locals.

Moreover, it continues to invest in its people through expert lectures, guided field trips and science-based research projects throughout the atoll. These activities include a sea-turtle-monitoring program, and propagating bees for release where colonies are failing elsewhere.

The resort fulfills its needs for food, handicrafts and other supplies locally wherever it can. As a result, the locals queue up to attend internship training in sustainability and doing what they can to mitigate global warming.

From its side the resort sources its energy from 4.000 solar panels provisioning 1.4 megawatts backed by the largest battery storage system in French Polynesia. You will not catch a whiff of diesel when you arrive, for the standby generators, when needed run on coconut biofuel.

Richard Bailey says “What I believe is that, in this business, the planet is our product.  And so are we, as a species. We are lucky in the tourism industry to have an inexhaustible supply of powerful agents of change – the travelling consumer.

“Discovery of the astonishing natural and cultural wonders of our world, how we fit into it, whence we came, what our future holds – these transformational experiences are the value proposition of our business.  We damage or lose these at our peril.  So tourism is the perfect laboratory for sustainable technologies and concepts.”

Creating super-luxury resorts in a responsible fashion can be a challenge because well-heeled vacationers expect to find every modern convenience to hand.  When they arrive at The Brando they find themselves in an 8,000-acre terrestrial and marine habitat preserve. Their old habits fade fast when they discover there are only another thirty-four heavenly villas on the island. They can indulge in their favorite daydream of being cast up by the waves onto a desert island, while knowing a short walk will return them to one of the most responsibly luxurious resorts on Earth