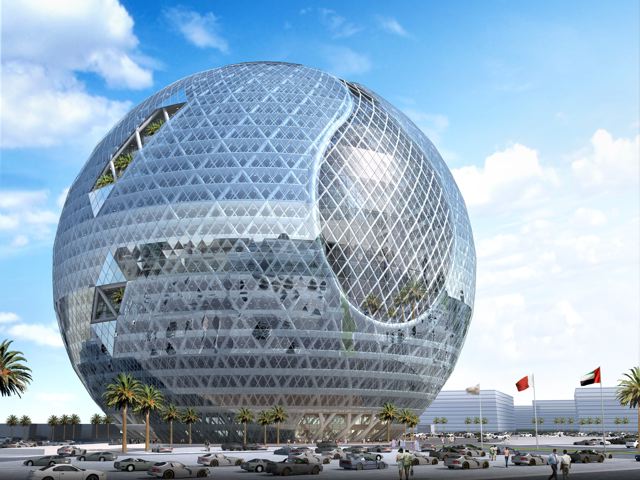 The concept of this iconic building for the Technopark of Dubai, is a building which will reflect

essence of the ecosystem that we live in. This concept takes the planet’s ecosystem and

that is wonder for people to visit, live and work in, and be a symbol of the power of Technology.

Technosphere, the globe-shaped winner of the CNBC Architectural Award Dubai 2009, is designed by famous architect James Law from James Law Cybertecture. He is well-known for his work in ‘Cybertecture‘, which is a combination of advanced technologies, architecture, and multimedia experiences for users. “Cybertecture attempts to innovate green buildings with the philosophy that a green building is not just green or a building, but much more; it is a comprehensive device that carries new technologies and possibilities of a better life within the building for its inhabitants,” says James Law, chairman and chief cybertect of James Law Cybertecture International in Hong Kong. “This requires the use of materials that go beyond the concrete, steel and glass, and into the new materials of the silicon chip, the electrons, the internet, and the intelligence of systems to be amalgamated seamlessly into the fabric of the building,” he says in an article published in Green Prospect Asia magazine.

from solar power to supplement the energy needs of the building. An intelligently distributed

plantations to contribute oxygen to the environment in a sustainable way. Other systems such

as water recycling minimizes the use and wastages of water in this vast building.

The Technosphere sits on the axis of the new city plan of Technopark , creating a symbolic

termination of the axis as if its location is the genesis of the city. From this point, the city seems

to grow, and deliberately, the Techosphere is awesome in its presence as the nucleus of the The iconic nature of the shape of the Technosphere comes from three factors. The first is it’s

on the horizon. The second is its enormous size, which will make it the largest sphere building

in the world, that will give it an omnipresence beyond any pure forms of architecture. The third

being that the nature of a sphere alludes to the even smallest elements of our world, the atomic

particles and molecules that binds our universe. In this the Technosphere is the symbol of how

This pioneering new development explores sustainable technologies and the planning principals to create a desert community that will be carbon neutral. Several systems will enable the building to generate its own solar powered energy, while strategically placed green terraces will provide passive solar shielding, even water will be recycled minimizing waste produced in the building. Technosphere will be a centre for the development of new ideas for energy production in the region and attract the highest levels of international expertise and commerce.

Techno Park offers a benchmark for the energy saving city of the future. Its environmental ambitions of are not only unrivalled internationally, they have also provided a highly challenging design brief. A mixed used, high rise, high-density design for Dubai city, the programme includes offices, residential space, a hotel, an exhibition hall and public courtyards. The principal structural system of the Technosphere is comprised of a spherical shape exterior diagrid structure, the podium base portal with perimeter raking columns as well as other internal major components including the steel roof trusses at top, RC core walls and shear walls, beam/column frames at typical floors and transfer beam grillage at 5/F. The internal structure is mainly of reinforced concrete with steel portion along the perimeter bays of typical floors. Podium floors are also of reinforced concrete with prestressed construction for long span portions.

The exterior diagrid forms part of the stability frame and the load-taking system of the Technosphere.  The diagrid interacts with the beam/column frames at typical floors, the core walls via the transfer system at 5/F and the podium base portal to provide the overall stability of the building. The exterior diagrid also contributes to the gravity load-taking of the building with the loads accumulated from floor to floor and transferred downward to the foundation system.

Due to the curvature of the towers, there is an overhanging portion at upper floors extending towards the central atrium. This overhanging portion is to be supported by a hanger system with the principal support from the roof trusses, which are integrated with the exterior diagrid towards the top of the sphere. One of the options is to have steel hangers taking the load from the overhanging upper floors and transferring the load upward to a series of steel roof trusses and the loads from the roof trusses are then distributed throughout the exterior diagrid, which carries the loads down to foundation.

The Technosphere mainly consists of two main systems, one is a semi unitized system at the typical hotel / office (south / north wings) towers, and another is the point fixing spider system at the atrium area

Since some glasses are over headed at an angle of more the 15o, the laminated glass worked as a safety glass, so in case of any glass breakage the PVB layer will still hold the broken pieces together.

The glazing is pre-glazed at the factory onto an alum framing and delivered to site in a panel form, hence site work is minimize, the semi unitized panel is then fixed on to the main diagrid on site.

Consists of clear glass with tinted / fritted pattern, held together by stainless steel spider, since no alum frame is needed a more clear and transparent view of the atrium can be achieved.

The laminated glass can be fritted or tinted to give better energy performance.

Steel CHS is used as a sub-frame between the main diagrid. High performance glazing, energy-efficient equipment and the use of regional materials are just a few of the other method employed to reach the LEED Gold rating. GB