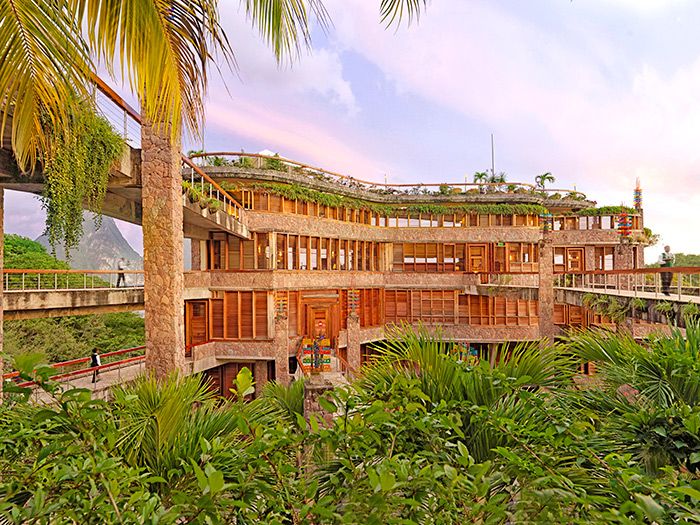 When architect Nick Troubetzkoy came to St Lucia Island on assignment, he had no idea of the labour of love before him. Or the challenge of creating a green masterpiece on a virgin cliff face for that matter.

However, what struck him most was the peacefulness around him, and the laid back approach to life of the handful of people living there. He resolved to create his ultimate masterpiece right there in the rainforest. He wanted to encapsulate that green beauty in 25 luxury suites, each with one entire wall open to nature.

With one sweep of creative genius this brought the view into each retreat, while doing away with air-conditioning because it couldn’t work. Instead, Nick Troubetzkoy placed a pool on the rim of each balcony he made of local materials, and with uninterruptable views of Jade Mountain across the water.

The entire resort is an extravaganza of water in ponds and streams and waterfalls that naturally cool the air. Every drop comes from reservoirs fed by island runoff, and passes through a filtration plant as it flows. The only sound is the gentle tinkling of the water. Nick Troubetzkoy explains:

“What I’ve really wanted to do with Jade Mountain is re-evaluate and redesign the basic concept of a holiday hotel experience. I wanted to create individualized spatial environments that would enable guests to forget about the furniture or the fact that they’re in a hotel room.

In essence, to forget about everything but experiencing the psychology of the space on an emotional almost spiritual level. When you combine the water with the air in this way, I believe you unlock a profound potential for an almost magical level of enjoyment and celebration – a magic that may well be the ultimate achievement at Jade Mountain.”

Nick Troubetzkoy developed an affinity for the local people as he planned his great masterpiece on St Lucia Island in the Caribbean. Truly sustainable architecture must improve the quality of their life too, he reasoned:

It was my ambition from the beginning to create an environment that fully captured the island’s beauty. Whether or not I’ve been successful in that effort is up to others to decide of course, but on balance I believe that we have made this part of the island a better place since those early days.

And so he set himself the target to create an organic vision of his dream of personalized guest space, which inspires an almost spiritual emotion. He had no mechanistic plan created on CAD back at the office in the city. Instead, he improvised as he went along to create a dramatic ambience in each sanctuary he built.

He increased the vision of a deserted island by replacing corridors with long, suspended air bridges that were the only way to reach a sanctuary and the magnificent vista beyond.  However, perhaps the greatest attraction is the private bathing pool. Indeed, pure organic water becomes an extension of living here.

Sanctuary pools are raised eighteen inches above the floor to bring them to the level of the bather, who can lounge on the two-foot-wide coping without having to kneel down. They can run their fingers through the water without actually getting wet, or immerse themselves intimately in liquid warmed by the sun.

Everywhere you look in Jade Mountain there seems to be water with iricandescent glass tiles reflecting through. This unlocks a profound potential to get grips with the true magic of the island the Amerindian people called Iouanalao, meaning land of the iguanas.

Here are few sharp angles either, causing Jade Mountain to appear to flow out of nature. Tens of thousands of cubic metres of concrete were prepared individually in small mixers, because concrete-delivery trucks could not access the site. Instead, they used chutes and wheelbarrows for continuous pours.

A small army of St Lucia artisanal workers achieved this remarkable miracle of love through thousands of hours of back-breaking physical labour. Jade Mountain literally grew out of the ground, says Nick Troubetzkoy. One plank, one nail and one shovel’s worth of sand, cement, gravel and concrete at a time.

If Jade Mountain appears to rise fresh out of the earth, that’s perhaps because first priority was sourcing local materials for responsible finishes. The sand, gravel, and rose-gray, hand-split stone cladding was sourced from the site.

Much of the remainder is from other Caribbean islands, including blush-colored coral plaster finishes from Barbados, arrays of coral tiles from Dominican Republic, and various tropical hardwoods from Guyana.

Artisans worked the timber by hand to extract the subtle colours and textures on doors and other fittings. St Lucia benefited as they discovered their talent and learned new skills for future projects. Every indigenous plant in this symphony of sanctuaries grew in the nursery on site. All surplus material was donated to the locals for their homes.

Obtaining United States Green Building Council LEED certification in 2016 was almost an afterthought, although perhaps it was one of the greatest achievements as it confirmed the project benefited people, planet and profit.

Travelite followed up the next year with gold certification for socioeconomic and environmental aspects, and reaffirmed its recognition in 2018. Jade Mountain and Nick Troubetzkoy’s sister resort Anse Chastanet are still the only recipients on St Lucia Island of this award.

Travelite was particularly impressed by passive lighting and ventilation in the sanctuaries, and the way the external facade captures water for koi ponds and vegetable gardens. They also appreciated the way the natural coral tiles on roof tops and walkways reflect solar heat.

Moreover, they also praised attention to detail during construction. Materials and plants were both sourced locally wherever possible, while an indoor air quality plan, and low-emissive paints and adhesives protected workers who were transported to site using electric transport.

However, Nick Troubetzkoy’s greatest triumph was the lasting gift he gave the island beyond the resort boundaries. The workforce did not only receive surplus construction materials free for use on their own properties. The project was also instrumental in the coral reefs of St Lucia being declared a marine reserve.

Most of all, I prize the spirit of ongoing creation that has for me always been the heart of this beautiful place. If we captured a portion of the island’s beauty and quality of life in our work here and can share it with visitors, then I think we’ve done something of real value.