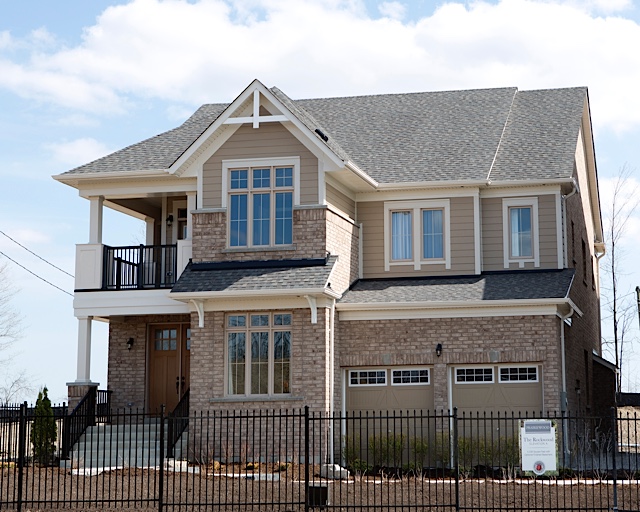 This is more than a tale of two cities – it is a story about two innovative projects in the GTA that have employed Low Impact Development (LID) techniques for stormwater management in award-winning fashion.

Both projects by the Sorbara Group of Companies – Prairiewood, in Stouffville, and Copperwood, in Kleinburg – have won a Living City Award from the Toronto and Region Conservation Authority under the Healthy Rivers and Shorelines category in 2013.

LID, in short, is a technique modeled after nature. In the case of stormwater, LID allows for a more natural approach that provides opportunities to enhance the existing natural environment and minimizes the requirement for structures and facilities that are intrusive and require significant ongoing maintenance.

In the case of Prairiewood, sustainable elements have been incorporated into every element of the development, from the design of the overall community to the individual houses.

Phase 1 of Prairiewood consists of 51 lots on quiet cul-de-sacs and located within the Oak Ridges Moraine Conservation Plan Area  and includes a large protected woodlot area immediately to the north. The site is designed for a more natural approach to a stormwater management system, focusing on natural infiltration through bioswales and a bio retention pond.

Bioswales, by the way, are planted with natural vegetation, and do not require traditional lawn care. They also enhance groundwater infiltration and reduce  erosion.  A bio retention pond is an alternative to a traditional stormwater management pond, and is covered with plants. Both follow an approach ensuring water from an LID community that enters natural waterways is clear and clean. “Prairiewood has also been designed to connect with the existing community,” says Catherine Pan, Development Manager at Sorbara Group. “An important aspect of this is the integration of existing public open space with new open space opportunities developed in Prairiewood.

“From the neighbourhood park – implemented through a partnership between the Town of Stouffville and Sorbara Homes – to the provision of trailheads, public space has been provided to allow for personal interaction, balance the urban environment and further the aesthetic and functionality of the community.”

Prairiewood will also hook into the existing trail network, thus providing options for connecting with the community.  In addition, GO Transit and local public transit are both easily accessible.

Pan says a plan has been created to protect existing trees and ensure their continued health during and after construction at Prairiewood. Additionally, a sizeable woodland feature and open space buffer lands found north of the community will be protected through their dedication to the TRCA. The emphasis on sustainability extends to the homes, as well, with a number of elements offered to homeowners, including:

All homes in Phase 1 of Prairiewood were built to be Energy Star-qualified, with benefits that may include lower energy bills, improved comfort, and lower impact on the environment.

Phase 2 of the Prairiewood site is currently in the development stages and a launch is anticipated in 2016/2017. In May 2015, a select number of lots were offered for sale at the Copperwood site, which is surrounded by an extensive open space and valleyland network to the north and west of the community. The site is approved for 154 single detached residential lots, each 60 feet wide.

The LID stormwater management approach at Copperwood is evident from top to bottom. And here are four examples: The Sorbara Group of Companies is an integrated real estate development, investment and management firm with a history of growth in Ontario since 1942. Sorbara now owns, manages and operates commercial/industrial, office and retail properties; has a residential apartment portfolio; develops high-rise and low-rise communities; offers insurance services; provides construction management as well as planning and development services; and holds land in various stages of development in and around the Greater Toronto Area.