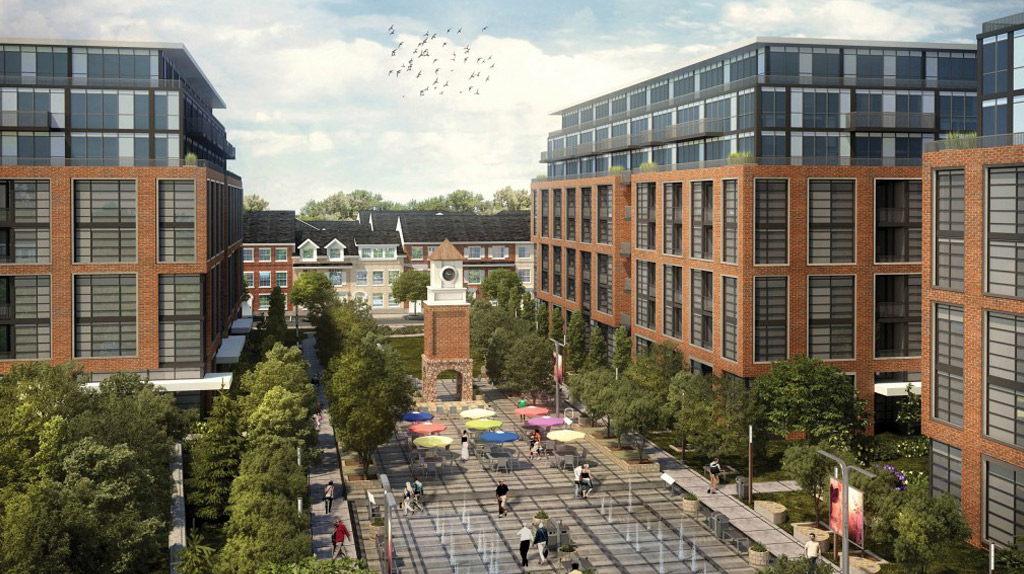 Finally at large-scale, a centralized district heating and cooling system is being studied for an inspiring 915-unit residential community in Kitchener, targeting to achieve LEED® Gold certification. If finalized, it will take natural heat from the ground using ground source heat pumps; and when more heating and cooling is needed it will be supplied by a combined heat and power (CHP) system, which uses natural gas in a miserly, efficient way. It will also eliminate cooling towers, reducing the amount of water needed for AC. In addition photovoltaic solar panels will generate more electricity than needed, defraying utility costs further.

Bruno Suppa’s time has come. Thirty years ago he was talking about alternative energy systems in the homes he was building. But there were cost and technology obstacles. Since then he has done everything right, gradually incorporating green tech, learning the pros and cons, and building his company, Queensgate Development Group into a strong player. Driving change without going broke means using an engineering charrette.

Charrettes are for technological turning points, especially when the stakes are high and it is time to commercialize a new direction. So on a sizzling hot July morning this year, Suppa brought together a world of experience to plan Victoria Common. About a dozen engineers from across Canada and the USA, Architect Mark Zwicker, plus a visiting geothermal-CHP specialist from Italy; they all gathered in a semi-darkened meeting room in Toronto’s hipster Liberty Village to talk about the proposed green heating and cooling system. The charrette defines the current state of the sustainable buildings industry: holistically integrated and poised to go large-scale.

THE CONVERSATION IS CHANGING

CHP district plants now offer compelling business cases because renewable system costs are decreasing and control systems can be programmed to manage and store energy and electricity like never before. This is more important to condominium buyers because governments are no longer playing down the fact that traditional utility costs are likely to increase significantly in the near future.

Suppa describes Kitchener-Waterloo as Canada’s Silicon Valley and says this demographic appreciates walkable communities, homes that are powered by environment-friendly sustainable technology and are affordable over the long term. About half of the first building in the development was sold as soon as it was offered

The question for the charrette is what is the best combination of technology, building practices and financial models to ensure investors make money, while using green technology. The lead engineering firm is Stantec, which has probably been more innovative than most other large (conservative) engineering dynasties. Stantec has 12,000 employees.

They talk about a special spider plow, designed for farming, but now being adapted and used for cost-effective large-scale horizontal geothermal projects. They talk about an innovative recent solution in which geothermal boreholes were inserted within the structural piles holding up a WestJet building in Calgary; and a geoexchange system at UBC that replaces natural gas and saves more than $600k per year. They describe new floor mat products from Uponor and others that make production scale radiant heat installs quicker and save 60% on energy.

Sergio Giuseppini, who has used co-generation technology for five European IKEA stores, talks about a 300-unit residential project in Rome that uses CHP and geo, similar to what the charrette is considering today for Suppa’s project. He notes the importance of knowing your goals from the beginning. Suppa reinforces that he is seeking to ensure Kitchener condominium owners don’t pay as much as others for utilities. This will soon become important to homeowners all over North America. He is also wondering if Ontario’s Microfit program will mean that some solar will make sense with this project and help generate electricity and revenue.

Tom Phelps from Stantec in North Carolina reviews a comparison of levelized costs for various technology configurations such as CHP, geo, solar, natural gas condensing boilers, biomass, coal and so on. These include capital, operating, financing and other costs. He notes that generic CHP releases less pollution and now usually costs less to the end user than utility distributed generation. He says the latter leaks 67% of its heat, while CHP loses just 20%. Phelps suggests to Suppa that marketing plans which would promote CHP for backup emergency power are not as strong an argument as ongoing cost advantages.

Geothermal expert Gino Di Rezze talks about his many years of hands-on experience and some of the new drilling and heat pump technology available. He has worked on major projects in numerous locations and comments on new Ontario regulatory specifics.

After a quick lunch at a nearby sandwich hub, the group gets down to the tough decisions for the engineering feasibility budget. What should we study? They only have a month or two, because the site must be serviced in time for spring construction.

They talk about system sizes, locations, phases, configurations and engineering study trade-offs. When considering adding geothermal to the system, the plan should be that it is running at least 50% or more of the time, to make it pay. It is important to right size the CHP plant for somewhere in the middle between full energy demand and baseload; to optimize capital and operating costs borne by owners.

They talk about the most appropriate kind of CHP, heat pumps, fan coils, the costs of HRVs, direct heat to residential units or configuring it through the central plant. A traditional low enthalpy system requires a whole different set of calculations from one that assumes heat storage. They ask Zwicker, the architect, to weigh in on the idea of disguising the CHP stack within a fancy community clock tower and building the mechanical room into the underground garage.

A WORLD OF EXPERIENCE

They discuss construction process differences in the USA, Alberta, Europe and Ontario. Civil engineer Ian Robertson talks about local wellheads, the municipality’s sensitivity surrounding drinking water and the way potability standards are being applied. He mentions the drilling freeze and revision of geo well rules in Ontario, the stormwater management system for the project, and the proposal for a 2000 cubic metre tank.

LEED consultant Derek Satnik provides ongoing commentary on how each decision under consideration would impact the LEED Silver or LEED Gold certification that Suppa hopes the project will achieve. Even Satnik sticks mostly to economics. He does not feel compelled to hop up onto a soapbox and explore climate change or greenhouse gas in any depth.

Suppa is visibly energized. He’s a man in his prime, finally fulfilling a long-term vision. We’re no longer talking about a few townhouses modelling green tech. It’s now 915 units that must make sense economically. And now it can. As sustainability moves into mainstream development projects, charrettes are changing; and the engineering conversation is changing too. GB

Designed to achieve LEED® Gold certification, Victoria Common is implementing one of Canada’s most advanced green energy systems for new home communities. With three primary components, the system will decrease the amount of fossil fuels required to heat and cool all buildings within the community’s master plan, as well as generating its own supplemental electricity. This will reduce the carbon footprint in comparison to buildings using conventional energy systems.

“Geothermal heat pumps are the most energy efficient, cost effective

• It features a unique co-generation system with its own generators that come on when the system senses that hydro power from the city’s electrical grid is more expensive than generating the community’s own power.

• This means residents can use power at any time of day or night and not worry about being charged premium rates. It also provides emergency power during city brownouts or blackouts.

• Victoria Common’s geo-exchange system together with it’s co-generation production provides 100% of the community’s heating and cooling with very little use of natural gas, so it is virtually emission-free.

• When there is unused energy, it is stored in various locations, ready to be used when needed – nothing is wasted.

• Solar panels will also be placed on the roof of each building at Victoria Common, saving residents money by reducing the community dependence on the city’s electrical grid.

• From its energy-efficient low-E argon-filled windows to its environmentally friendly landscaping, Victoria Common’s green design thinking means significant savings and greater resale value for those who purchase a home here.

• Roof areas will be coated with highly reflective membranes in order to reduce heat gain in summer months.

• Collection of storm water for irrigation.