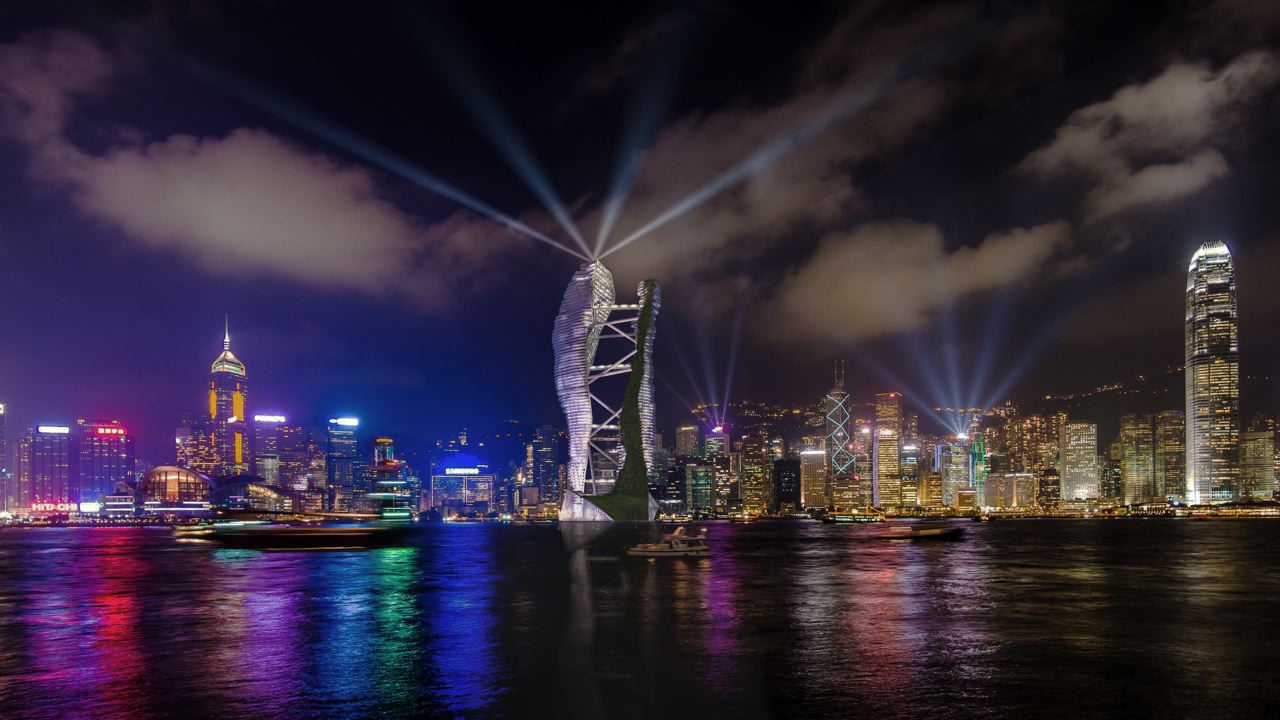 Should all skyscrapers have the same language? Should they always be cladded in glass?

Studio CACHOUA TORRES CAMILLETTI started out by trying to envision what a skyscraper should be in the future era, by letting go of many ingrained preconceptions about the way tall terraces have an important semiotic and symbolic significance in culture in countries such as China, and they are spawn by the need to sow seeds vertically. In addition to the formal beauty inherent to these terraces, they are a source of plastic inspiration and a living example of the respectful change of nature by humans, who do not pose any environmental aggression, and are both respectful of nature and of a man. Studio CACHOUA TORRES CAMILLETTI finds such richness of the meanings and interactions that it was decided that rice should be the crop of choice for the Skyscraper.

After defining the program, the team proceeded to search for the ideal spatial scheme for the building. After experimenting with several options, they reached a final scheme that included two towers.  This choice was made due to three main reasons.

The first reason is a poetic one. The towers embody in a way, a battle that represents Hong Kong, a battle between the historical and cultural pride of a city that has passed through time, and it’s many contemporary architectural languages that do not necessarily belong to it’s culture and that are not from concepts rooted within the city.

Secondly, and in a more pragmatic motivation, was the realization that multiple use towers are now commonplace, but they ignore in their morphology the individual character of each use.  Therefore, why not go back and question this ingrained assumption? Why shouldn’t the building have an unique character for each of the uses it houses, or better yet, give each use a different form? The team wanted the building to be able to show in the exterior it’s mixed-use character. Thusly they split the two towers in their uses.  The larger tower is for commercial use with offices, retail, entertainment, etc., and the thinner tower is for residential use.  This way it can actually be seen where the living spaces are, and where the commercial and production happens and each can have its own character pertaining their use. The last reason has to do with the shape itself. We wanted a design with sculptural characteristics that were not arbitrary, and had a full connection to the whole concept. So, we designed a scheme in which the building flows from the base, in a metaphorical sense it would be like the building protruded from the ground in a tectonic way, and following this conception it split in two to form a canyon.  The team at Studio CACHOUA TORRES CAMILLETTI was inspired by the idea of natural rock canyons, and found poetry in their contours and in the way that they generate their duality, a male and a female shape, which could be joined together.  The two resulting towers create in between them a protected gorge of lush and fertile gardens. The tower bodies are scattered with “rice terraces”, which grow atop their bouldering shapes.

The choice of form, although it is a creative process, and in a way artistic, it generally must take in to account the conditions dictated by the environment, such as predominant winds, sun orientation, views, structural design, interior function, and only then can it allow for artistic expression. Even while Studio CACHOUA TORRES CAMILLETTI decided that the final scheme would be comprised of two separate towers, the project continues to be a unit that works holistically, and in actuality, it is a single structural system that supports and joins both bodies together. They compensate and stabilize each other’s mass by the means of braces, trusses and bridges, to work effectively as a single building.

In terms of function, the architects believe that building design should seek the improvement of the experience of the user, and, vertical transportation is one of the most dreaded experiences in high rise towers. That is why the residential building works as several small residential buildings stacked on top of each other, each with a lobby that is accessed by a transparent bridge from the larger commercial tower and reached by a dedicated high speed lift, separated from the ones that serve the commercial tower. In this way the amount of elevator shafts and time spent in them is greatly reduced, and the experience of living in such a high scale tower is brought down to a smaller more approachable residential size. Each residential tower segment is then a relatively small apartment complex with fewer neighbors, making it possible to create a sense of community between them in such a big building. Regarding the energy requirements for such a tower, the team at Studio CACHOUA TORRES CAMILLETTI believes that the building they are proposing could be entirely powered by renewable energy but at this time it might not be economically feasible.  They believe that in order for this or any other sustainable building to become a reality, it has to be economically viable.  The first alternative that was studied for this purpose was geothermal energy, but given the building’s position, the depth of the water table, and the depht at which the target temperatures could be reached in Victoria Harbor, it turned out to be too expensive a proposal. Solar energy is still not efficient enough to power the whole building; it would require much more surface than the whole surface of the tower’s façade.  Wind would not be an option for the whole building since there is no space for large wind turbines.

Fuel cells are still utterly expensive and hydrogen power plants just offset the production of hydrogen to other carbon producing processes such as steam methane reformation that uses natural gas. There is no point in using dirty energy to make clean energy. The architects then turned to nuclear energy, in which they are firm believers, but not necessary in the way it is today, an aging technology, but in the safer and more compact ways that companies such as Mitsubishi and Toshiba are proposing. So, in this sense, this building is betting on the future generation of nuclear reactors such as those defined as 4S (Super Safe, Small and Simple), which are more economically feasible and have the capacity to power the entire structure. They would in a way become a “bridge” technology that would offset the carbon footprint of fossil fuel based power plants, until the time the renewable power technologies are able to fully power a building such as this.