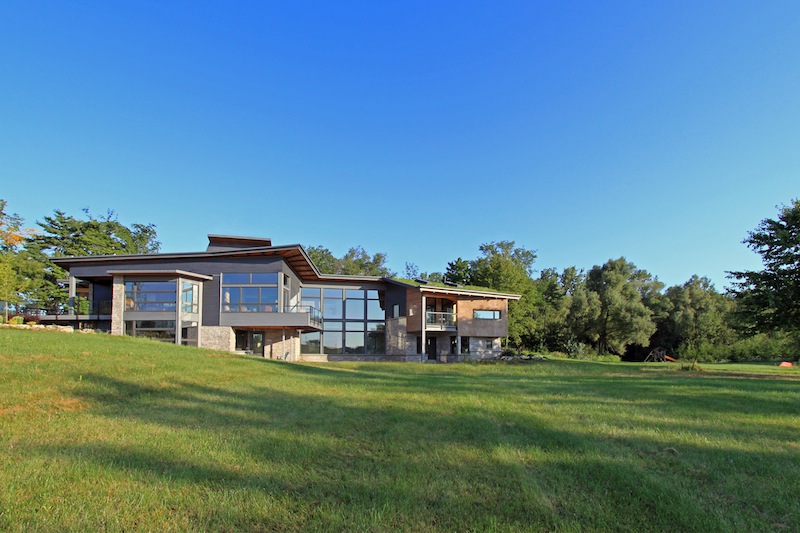 Sitting down with Toronto architect Martin Liefhebber to discuss his work and his outlook on sustainability, I find myself imagining the occupant of a building as one of its material components, and of the building as an extension of the person living within.

The notion of mutual dependence, of building and occupant as a single organism, seems absurd in today’s harried world where interaction between prospective homeowners and the myriad of building tradespeople and professionals is at best fleeting and harried. At the frantic pace condominiums, green or otherwise, are filling out the cityscape, how can there possibly be time for anything more than impersonal, tightly scheduled meetings with clients?

From his storefront studio nestled within a residential offshoot of Chinatown East, Liefhebber could walk to Bay Street to do lunch with developers. Or, conversely, they could take the streetcar to visit him. But neither happens terribly often. Not that his firm, Breathe Architects, is hurting for work in these tough economic times. Design posters and blueprints abound, and it isn’t long before I’ve memorized Liefhebber’s ringtone.

“I have a big problem with green building,” he tells me, with just enough smile to suggest a love-hate relationship. “The hubbub around LEED, new glazing systems and everything else is really to facilitate the construction of high-rise buildings, because that’s where most of the money is sitting.”

This seems harsh from someone whose curriculum vitae is replete with green projects of assorted shapes and sizes. But then, again, these projects aren’t generally mainstream. Sure, there’s Calumet College at York University, built in 1990, and the high-profile Toronto Healthy House off-grid project of 1996. But there’s also The Roost, a garden studio measuring a scant 100 square feet, and buildings made in part with discarded tires and pop cans. But Liefhebber, who teaches environmental design at the Ontario College of Art and Design, says he’s more concerned about an occupant’s lifestyle than he is with building size, and sees a greater need to consider how materials function than rely on machines.

A 900-square-foot house Liefhebber designed is currently under construction in Meaford and is centred around his client – a woman, recently retired, who wanted simple, low-cost, active country living. “It’s very efficiently laid out and has a fairly steep steel roof that collects rainwater to flush the toilet and water the garden,” Liefhebber says. A cistern beneath the kitchen floor supplies potable water, and his client is considering breeding tilapia, a fish species in the carp family people pay for in supermarkets, in an outdoor pond and indoor pit that are interconnected. But it’s the lack of a furnace or other heating and cooling equipment that stands out.

sure comfort even during the coldest weather. A greenhouse that will add warmth on sunny days can be closed off at night or when it’s cloudy. However, it’s a third component to the home’s heating plan that stands to make all the difference – the occupant, and the various activities such as cooking and making tea, that occur within. “The whole idea of PassivHaus, as I interpret it, is that the house is heated because someone is living inside.” Liebheffer considers the use of machinery to heat and cool buildings antithetical in sustainable building and says his client’s interest in farming tilapia speaks to the relationship between home and occupant. “The idea is not to go out to Starbucks and pay $3.50 for a latté, but to make your own latté at home, or to invite friends over for warm wine. The whole thing is like the slow food movement, a slow way of life. It works with no energy and by keeping our imaginations strong.”

While the countryside might seem idyllic for active, PassivHaus living, Liefhebber is convinced it can also work in cities. “We have a social problem, not an engineering one,” he says, tying modern building to a lifestyle built around consumption, excess and waste. “You need a lot of money to maintain that. Instead of buying fossil-fuel-based energy, we need to be a little bit more active, walk to work, wear a sweater and close our drapes at night.”

Liefhebber says he sees little merit in designing green buildings if their occupants spend little time in them and commute long distances to work, or if energy-efficient heating and cooling systems require ongoing maintenance and replacement within scant decades. He’s particularly outraged that green buildings are so dependent on pricey components. Drawing on the recent Occupy protests, which laid bare the fact that less than one percent of the people control the world’s wealth, he says it’s high time the sustainability industry pays attention to the bulk of the population. “A glazing sandwich that allows sunlight or direct light to come in, and passive solar to heat buildings – they’re wonderful and I do many of them, but they cost a lot of money and are for very well-off people.”

The answer, Liefhebber suggests, lies in going back to basics and planning more thoughtfully at the neighbourhood and community level – for instance, locating jobs and services within walking distance rather than in designing cars that use less gas. He says LEED for Neighbourhoods “comes close to the mark” but calls for a more fundamental shift in attitude. Walking to work and shopping in one’s immediate neighbourhood would undermine certain sectors of the economy, but others would thrive. Instead of big-box stores and massive, central factories, there would be increased emphasis on local jobs and sustainable communities. “When something destabilizes it creates new opportunities. Everything would just shift a little bit,” he explains.

Many of Liefhebber clients fall within the 99 per cent bracket he’s concerned about. Some are on fixed incomes; others work in creative areas that don’t pay well; a few prefer to grow their own food and be as self-sufficient as possible rather than being tied to jobs to pay utility or mortgage bills. So, when it suits his clients, he sources materials that are inexpensive and whose reuse constitutes an environmental virtue. He’s built several straw bale houses over the years and even crammed discarded pop cans and rubber tires with earth and placed them inside walls to support buildings, much like pillars.

The Knell Tire House in Price Edward County, near Belleville Ontario, is a perfect example. Designed by Liefhebber, the occupants built the house themselves. The building has a pitched roof, increasing the capacity for storage and roof insulation, but does not have any central heating or cooling, and uses rainwater wherever possible. More to the point, Liefhebber salvaged the tires and cans from the recycling bin and redirected them to what’s considered even more environmentally virtuous – re-use.

Most of Breathe’s clients are low-rise residential, but he’s incorporated his green ideas into a daycare, a veterinary clinic and a cultural centre. In 2001, he designed a housing project for people with chronic fatigue syndrome in Clarkson, a Mississauga neighbourhood. Four households pooled their money and each got independent 1,200-square-foot apartments inside a building with straw bale insulation and a solar photovoltaic system that supplies one-third of the power. “They shared an allergic reaction to chemicals in the air and were thinking of renovating,” Liefhebber says.

Pop cans, tires, straw bale and huge wads of insulation aren’t the stuff which condos are made of. But then, again, towers aren’t what Liefhebber and his associates want to work on. “I don’t have a big thriving office with tons of people working here, just a handful of colleagues. What drives all of them is the search for alternatives. They don’t want standard jobs, and our clients don’t want a standard product.”