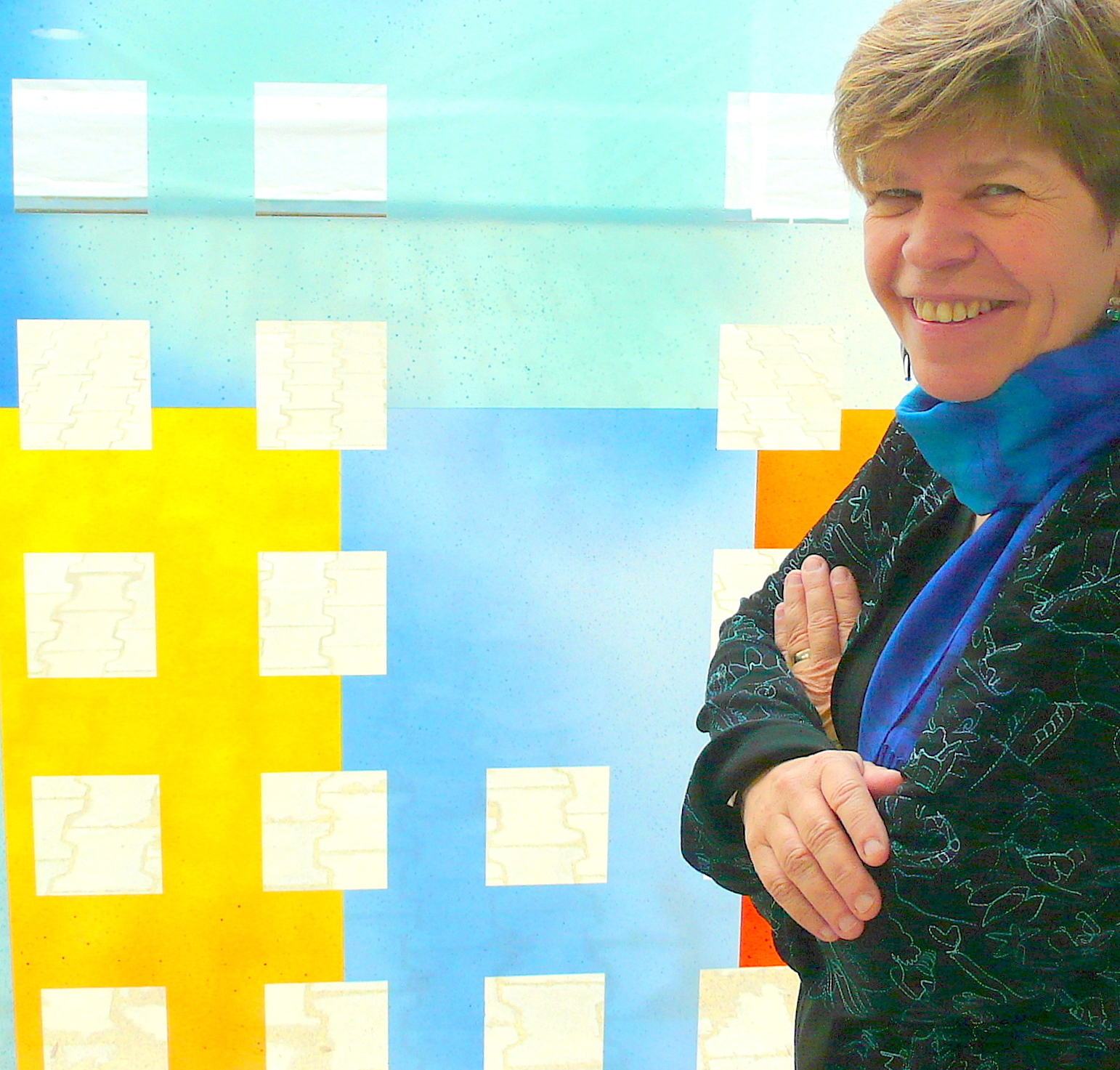 The Royal Ontario Museum in Toronto conducts bus tours and walking tours of nearby art and architecture. One of these easily outsells all the others, a bus adventure dedicated to stained glass windows and architecture. You might expect the tour’s destinations to be traditional stained glass in churches and cathedrals. In fact, the bus just as often stops at contemporary new buildings with stained glass designs by Sarah Hall. Sometimes the special guest tour narrator on the bus is also Sarah Hall. You may ask what’s new in stained glass? The answer is that there is plenty that’s new, especially if it involves Sarah Hall.

Hall became interested in stained glass at a young age and discovered that it is a very small world, especially in Canada. In order to find in-depth training in the field she journeyed to Swansea College of Art in Wales. She returned and established a studio on Dupont Street in Toronto in 1980, where she and her craftspeople worked for two decades, introducing new ideas in a conservative field. She was interested in combining new building technologies with stained glass.

Around the turn of the century she became involved in projects that required her to relocate her fabrication studio to Paderborn near Hanover, Germany. In Germany she could access a larger pool of glass artisans and large size kilns for the ideas she was hatching. In addition, the stained glass industry in Germany has connections with the broader glass industry, allowing for ambitious product development. New ideas include stained glass windows that could be sent to Austria and tempered, as in safety glass; new kinds of glass that could combine art with heat mirror technology, as in R20 insulated office tower windows; and last but not least, stained glass projects that incorporate solar photovoltaics. Christof Erban is a renowned German engineer who pioneered the concept of placing a solar PV cell between two layers of glass. Many years ago he visited glass painting studios in Germany looking for artists who were interested in working with photovoltaics. While others focused on the challenges, Hall jumped at the chance. The rest is history. Hall’s studio is now at the forefront of contemporary stained glass architecture.  Since moving the studio abroad, her Canadian/German team has been involved in more than 200 projects.

Sarah has recently completed a project called Waterglass at Harbourfront Centre’s Enwave Theatre, which is expected to open to the public in Spring. The glass is highly artistic, incorporates heat mirror technology, employs NASA’s dichroic glass technique (sandblasted on its back side and laminated so that it is transparent but also highly reflective of UV rays) and on the western exposure, as directed by engineers, includes photovoltaics to capture solar energy.

Her team of six technicians created 1700 square feet of a handmade art glass in just three months. It was crafted in the German studio, sent to Austria for heat mirror and photovoltaic laminations and arrived in Toronto ready to install in thermo-panel units.

In addition to being a technical marvel, the installation is an artistic and historic gem.

“The client wanted to symbolically reclaim the lake for Torontonians,” says Hall. “We are cut off in a lot of ways and have not built the lake into our thinking as a city.” At first glance visitors will see water, waves, and the silhouette of a ship. On closer inspection they will find much more.

Hall researched and photographed the lake’s north shore for months and then began researching images of people, locations and events. The windows contain hundreds of silk-screened archival illustrations of personalities such as swimmer Marilyn Bell, rower Ned Hanlan, structures like the art deco Sunnyside Swimming Pool Pavilion, and R.C. Harris Water Filtration Plant; events including the war of 1812, pandemics, celebrations, political events and families simply enjoying the lake. “The research experience was very instructive,” says Hall. “Much of our waterfront is privatized or otherwise inaccessible. We need to open up the lake to our consciousness, in order to care more about it.” Hall’s team also created beautiful glass for a wind tower or wind catcher at the University of British Columbia. Wind catchers are traditional Persian architectural elements used to generate natural ventilation in buildings. Hall’s stained glass is the central element of a wind tower that completed an underground library at the university’s Regent College. The forty-foot tall wind tower provides ventilation for the library and is a functional symbol of Regent’s commitment to renewable energy. Hall created a luminous column of light, flowing like a waterfall in silvery blue, violet and white. Included in this column is an array of solar cells that collect energy during the day and use it for nighttime illumination – acting as a beacon for the surrounding park.

A similar concept was used for the Grass Valley School in Washington. The architect was interested in a sustainable initiative and felt that not enough educational value would result from simply adding solar panels to the roof. Hall created a beautiful artistic glass window for the main stairwell that included PV cells. These were connected directly without inverter or batteries, to a large LED lighting fixture in the main hall. Students soon saw that the fixture was powered only by the sun, glowing brighter and longer on the sunniest days. Perhaps the most exciting concept that Hall’s team is working on is a brand new type of solar glass cladding for retail stores and office buildings. Her other projects involving solar have been primarily symbolic or educational, rather than highly efficient in terms of electricity generation. The new product, being developed in partnership with a prominent Toronto architect, aims to change that and collect significant amounts of energy. At the same time it will create artistic canvasses of larger expanses, or entire exteriors of shops or towers, according to client preferences.

Subject matter will range from highly artistic to commercial in nature, all rendered beautifully in contemporary glass by a very leading edge artist named Sarah Hall.