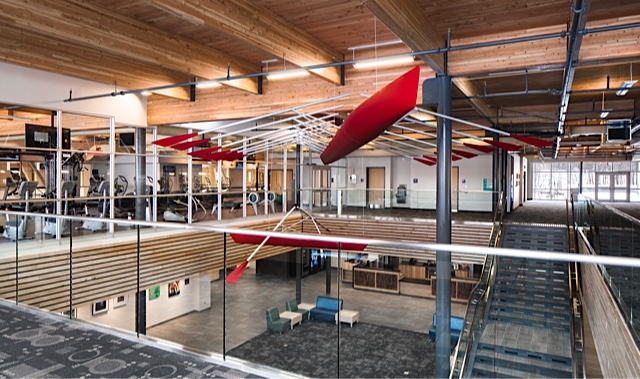 Construction of the Richcraft Recreation Complex – Kanata (RRCK), in the in the north-western part of the City of Ottawa, fulfilled a long-standing need for a major recreation centre in this rapidly growing area. The $43 million, 77,000 square foot complex used a Design-Build construction process to provide the best possible design, value, and return for the City within an accelerated delivery schedule. The facility is considered an emergency shelter so it was designed and constructed to meet post-disaster standards.

At the outset, the City of Ottawa presented a strong sustainable design agenda, requiring high energy performance from the building and low environmental impact from the construction. Residents also wanted a more sustainable facility so the RRCK was designed to meet the energy efficiency and environmental sustainability requirements for LEED Gold certification.

Community input during planning led to a design concept that felt more like a ‘home with a big backyard’ than an institutional recreation complex.   The use of wood played a crucial role, not only in the approach to sustainability, but also in the aesthetic design, and the resulting facility has been embraced by local residents.

“We had tremendous success in our first year of operation,” says Chantal Laporte, Facility Manager at RRCK. “In 2014 we had over 1.3 million visitors and we are expecting growth over the next several years as Kanata North expands further with new home building projects.”

The facility’s mechanical systems include HVAC systems that meet ASHRAE 55-2004 Thermal Comfort Conditions for Human Occupancy, ground source geothermal heating and cooling, a grey water recovery system for the pool and showers areas, and a Building Automation System which monitors and controls all building mechanical systems for maximum efficiency.

In addition to these energy-efficient operating systems, the structure itself has been carefully considered to minimize its environmental impact. Life cycle assessment studies, which assess products from acquisition through to final disposition, have shown that certified wood has the lowest impact on the environment when compared with steel and concrete.

Christopher Williams, Vice President of Timber Systems Limited, the project’s timber fabricator, echoes the importance of life-cycle analysis. “The City of Ottawa’s choice to use wood was not just for appearance’s sake,” he says. “While the wood certainly does look stunning, the long-term efficiency and environmental impact of material choices really matters for structural materials; if more owners considered life-cycle impact, we’d see more uptake in wood’s use.  It is, after all, the only renewable structural material we have!  But construction budget always matters, and the facility’s design and layout lent itself to a cost-effective structure too.”

This free calculator can be found online at: http://cwc.ca/resources/online-tools

The structure housing the main lobby, central corridor and fitness areas is primarily composed of glue laminated timbers with a wood roof deck. All recreational activities within the building can be viewed from this central hub. The 38mm and 64mm deep tongue and groove roof deck increases the R-value of the roof assembly. When compared to other roof deck materials, wood has an inherent resistance to heat transference that gives it superior thermal performance. The natatorium roof is also a heavy timber structure. Humidity problems such as condensation and corrosion, which are a common concern with steel roof framing in pool enclosures, were eliminated by using wood. Although a mechanical system is employed to reduce humidity in the pool area, humidity levels can often still be higher at the ceiling level because the warmer, moister air rises. The humidity levels at ceiling level, however, are not so high that they’d present a durability concern for the wood and because wood is a hygroscopic material, naturally able to absorb and release moisture, the wood roof itself helps moderate the humidity level and improve air quality making wood the best material for a pool enclosure.

The eight-lane swimming pool is one of the most popular aspects of the Complex. Traditionally, city recreational facilities feature six-lane pools but the public was so determined that an eight-lane pool be installed that the local council helped raise $1.7 million to put toward the additional cost. The natatorium’s bright and open double-height space over the lap pool deck overlooks the green roof.

The RRCK is a resounding success, both as a building and as a community centre. Recipient of a Wood Design Award for Green Design from Wood WORKS! Ontario, this award winning building is an excellent example of beautiful, sustainable, municipal infrastructure. “We were fortunate enough to work with such a great client / owner collaborative,” says project architect Gerry Pilon, Salter Pilon Architecture. “Through a shared project vision, a warm and welcoming atmosphere was realized utilizing natural wood elements throughout the facility.”

Looking beyond its sustainable features and impressive energy performance, RRCK is a building that people love, and well-loved buildings endure, often long beyond their projected service life because they are enjoyed, maintained, and even adapted over time to remain relevant to changing user requirements.

The wood products in RRCK do so much. They sequester carbon, increase the energy efficiency of the building envelope, improve air quality and provide a safe, welcoming environment for staff and patrons alike. And, although the RRCK is new today, when it does finally reach the end of its service life many years from now, the wood can be reclaimed for other purposes, extending its useful life and enabling the facility to do one more good thing for the environment.