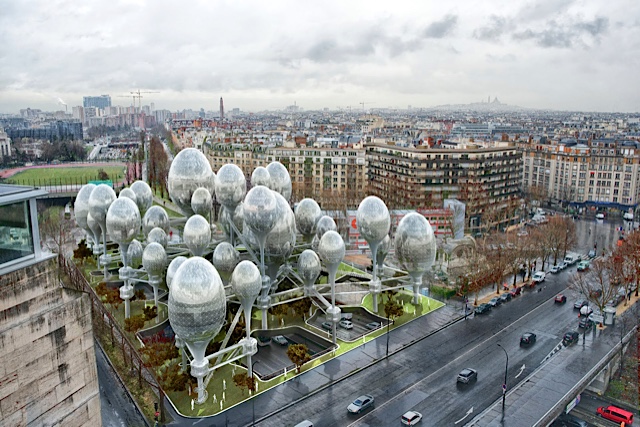 When you hear the words futuristic sustainable architecture mentioned, it’s a safe bet that the name Vincent Callebaut will come up as well.

That’s certainly the case, again, with the Belgium-based architect proposing 2050 Paris Smart City, where he envisions remaking the French capital into a city of green.

His ambitious idea was commissioned by the Parisian elected council, but he’s not the only thought-provoking architect to get in on the act – Planning Korea has also taken a stab at transforming Paris into a sustainable city.

The initial artists’ renderings, submitted by Planning Korea, as part of its proposal, show how large, egg-shaped metallic spheres could be supported by long necks, or stems, of differing heights. Each “egg” unit tower would be made up of a grouping of office spaces, residential units, commercial spaces and commercial facilities. Connecting all of them would be bridges, so people could move freely between pods. Said a spokesperson for Planning Korea: “The concept of L’air Nouveau de Paris is a practice of consilience of space which suggests the air of Paris for the 21.5th Century.”

They went on to say that the architectural design did not follow any typical form or building context.

“As linked directly and indirectly with each other, spaces floating in the air have a unique organic structure, considering individuality and connectivity at the same time.”

In their proposal, Planning Korea provides vague descriptions of what sustainable features would be included, although the common theme of air quality is maintained throughout.

“The airspace that breathes into each other is the encounter between past and future, the conversation between society and individual, the moment between idea and creation and the medium that connects Paris and the world,” says the proposal. “The area around the architecture, society and environment then integrate as a point of view, making a consilience.”

Moreover, the proposal went on to describe the design motif for L’air Nouveau de Paris.

“It was dragged from the observation of a micro world of nature, with little organisms in the gardens and woods in downtown of Paris, co-existing within the macro world of artificial structures – the buildings.” Planning Korea’s description also maintained that micro-organisms in nature are quite different, generally, than man-made structures in urban areas, but that L’air Nouveau de Paris would change that.

“As these living complexes take a key role in sustainability and resource circulation, [we feel] L’air Nouveau de Paris will be crucial to sustainable urban revitalization of Paris.”

Should the plan come to fruition, it would reportedly be constructed at the Ternes-Villiers area of Paris, in a sprawling 3,891-square-metre space, sometime around the middle of this century.