Rebel With a Cause 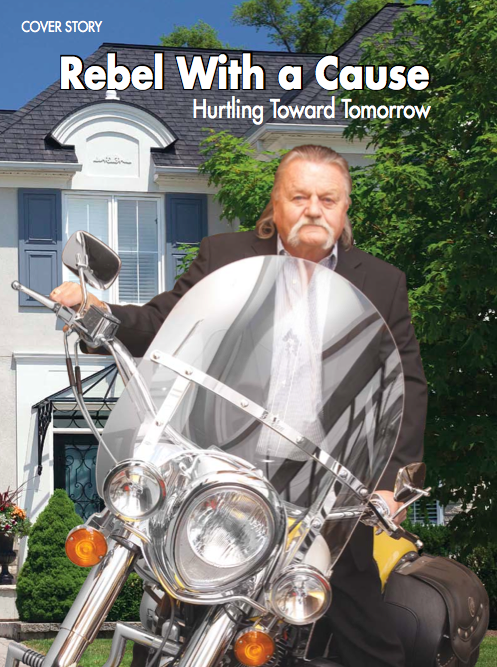 Rebel With a Cause

Nothing is slowing him down. He may be in his late sixties but after 43 years in business, George Gronwall is still leading Applewood Air Conditioning into the future at blinding speed. Well, maybe not blinding. But growth is brisk for one of southern Ontario’s largest heating and cooling contractors.

That’s because George has continuously found crafty ways to adapt or lead in a changing world. He has mentored his team of 100+ employees with a mix of old fashioned human values, good customer service, contemporary sustainable technology and unfailing determination. The CEO whose email is theboss@applewood likes to think of himself as a tough operator with a rebellious streak, who loves speed. But his grandchildren know him as a softy who will do anything for them; and his numerous long-term employees describe him as generous and easy going.

In the early days NHL hockey legend Paul Henderson asked him for a deal and George spent a weekend with him drinking beer and installing the system together. “Now instead of beer they pay me with money,” he jokes.

Reducing Waste Since the 1970s

He wanted to study architecture, but he and his young wife, Hope, couldn’t afford schooling. So he established the business in 1970 and named it after his Applewood Hills hometown. The industry was competitive and George was looking for ways to serve customers faster and more economically. In1975 he set up an in-house metal shop so that Applewood could order material in bulk, customize systems quickly, use scrap to make cleats and dampers, and save customers time and money. It worked. The company began to grow. By the 1980s he had already diverted tons of waste from landfill sites.

Now more than 200,000 installations later, Applewood has 50+ trucks on the road and serves all the top builders in southern Ontario. Along the way George added a design-build department, gas fireplace mantle shop, and expertise in all of the newest heating and cooling technologies; including heat recovery ventilators, high efficiency furnaces, geothermal and home automation systems.

Success in the trade has allowed George to indulge in another passion: speed. He drives a 525 HP Porsche. “It smokes.” He says. He also rides an Indian Chief Vintage motorcycle when he is in Canada and a Harley Heritage Softail when staying at his condo near Sarasota in Florida. He likes speedboats and racehorses. Right now he owns one racehorse but at his peak owned 16 of them. He still operates an indoor track where his friends in the racing field can run their horses during the coldest Canadian months. It was considered crazy when he first proposed it, but like many of his ideas it turned out to be a good one.

His rebel streak probably restored sanity to an industry. In the 1990s Lennox and other manufacturers began thinking that to maintain market share they should guarantee customer loyalty by buying up the independent contractors. George didn’t think this was a good idea and he turned out to be correct. He liked the personal touch offered by his family-run company and is proud that even with all their success, customers can call up during 2012 and talk to any of the Gronwalls on the phone without a problem. When it was made he resisted a formidable offer made for Applewood and kept growing the business. The manufacturers soon realized that becoming an installer didn’t make that much difference to market share, and was a tough business to operate. In addition, they were competing with Applewood, one of the largest installers in Ontario. It wasn’t good for sales. After a few years they sold most of the businesses back to local people, including many of the original owners. George was happy to re-engage them as suppliers.

“He’s easy to get along with and can be very kind,” says Joel Pearce who manages Applewood’s high-rise and non-residential installations. “Sometimes he lets me and my family use his condo in Sarasota. He has a good heart. We’ve done some charity rides together.” Pearce is talking about the Mattamy Homes Ride for Cancer and several other causes supported by Applewood. “George’s Indian is very fast and George likes to be out in front.” Says Pearce, adding that there is absolutely no truth to the rumour that his own modified Electra-Glide Ultra-Classic Harley is faster than the boss’s machine.

“We install HRVs in most of the units and in medium-rise and hi-rise buildings. This means the pretty inefficient make-up air systems for pressurization in corridors are much smaller.” The company is also installing more and more radiant floor heating, tankless water heaters and HEPA filters. The Applewood web site notes that radiant systems are 30% more efficient than forced air and that HEPA filters remove 99.9% of particulates as small as .03 microns.

“We’re moving with the trend toward more mid-rise buildings,” says George. “It’s all about greater density and more energy efficiency.” You can be a follower or you can be a leader. I like speed and I like to be out in front.”