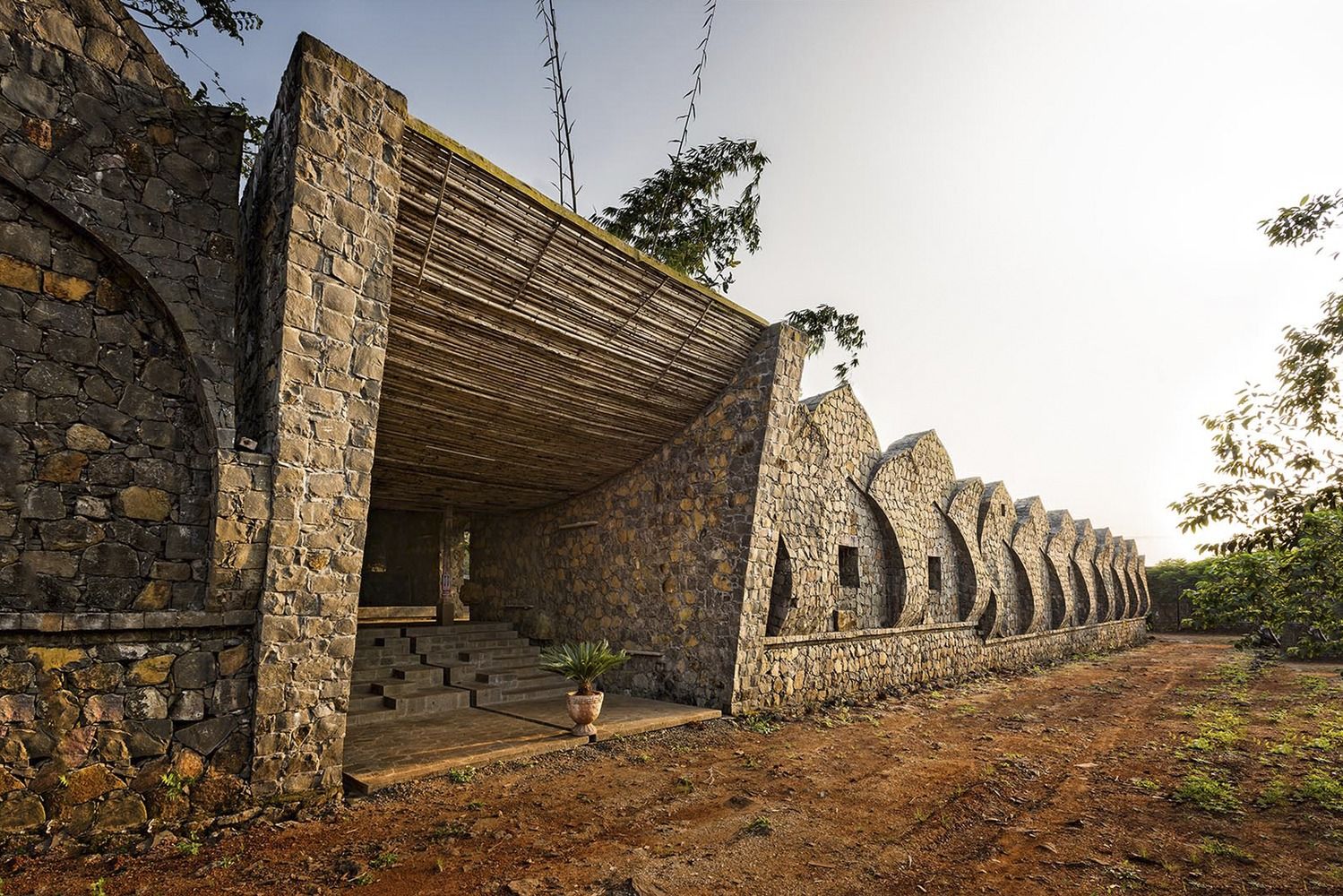 The vision for Kondan Resort goes beyond the primary purpose of providing hospitality with modern amenities at a scenic location, and seeks to address concerns related to its social, regional and environmental context. Only half the 30 acre property has been developed, with the resort facilities being restricted to 16% of the area, 10% allotted for rainwater harvesting and power generation, and 23% reserved for reforestation. Taking clues from traditional architecture, the built-form was evolved as a series of walls that define private and public spaces, and lend their peripheries to socio-economic activities reminiscent of historic citadels.

Maval is located in the hills that separate the cities of Mumbai and Pune, and contains a series of large man-made lakes built to supply water and hydroelectricity to these urban areas. Although scenic, the region remains remote and lacks basic facilities, with the primary source of income being small-scale paddy and dairy farms. The client, originally from Maval, chose to return with a business model that would also create livelihood opportunities and stimulate the local economy. The attempt then was to provide the urban visitor an expected level of comfort housed in a built-form that respects its context and does not alienate its neighbours. Located on a slope along the backwaters of a lake, only a fraction of the site has been developed, and where construction was undertaken, footprints were optimized to respond to topography, exiting trees and natural waterways, with portions of the natural surroundings either contained or revealed as views. Imagined on the lines of a historic citadel, the site is sub-divided into zones of increasing privacy, stepped down along the hillside and defined by eight intersecting walls, each with a unique character specific to its purpose. The resulting interweaving of enclosed, semi-open and open spaces cater to different activities. Reception and Restaurant: accessed through the pramukhdwar (ceremonial gateway), the reception area creates an experiential connection from public to private zone via a gently rising, narrow and introverted lane that eventually opens onto the restaurant’s main deck with a stunning view of the valley to the south.

Aamrai: four multi-level suites situated inside a mango orchard, the spaces of each being draped around one or more courtyards. Tarangan:  a series of six cottages cantilevered off an axial spine towards a grove frequented by fireflies. Swimming Pool: spreads organically through a cluster of trees, ending in an infinity edge towards the eastern valley.  Health club and Spa: located on the north-eastern end on the site, the spaces open onto the forest, with parts that are open to public, such as the indoor sports facilities and gym, being accessed directly from the public area. The walled campus lends its periphery to various elements of traditional public spaces that facilitate interactions and transactions between visitors and the local community. The kund(stepped reservoir), focal point for such activities, is flanked by the bazaar(shopping street) with workshops and stalls for artisans, a moha(Madhucalongifolia) orchard for weekly farmers’ market, and a hall for conferences or other informal gatherings. Much of the building material was sourced from the site itself. Stone from the excavation of water bodies and foundations has been used extensively in various interpretations of vernacular techniques ranging from dry pack to dressed masonry to composite boulder concrete. During the course of construction, objects such as stone light fittings were sourced from local craftsmen, and daily-wage labourers from nearby villages were trained in masonry or other vocational skills that would guarantee them employment as part of the resort’s maintenance staff. In India, where multiple and diverse cultures have evolved over generations of living in a specific geographies, regional identities and traditional wisdom are losing their relevance in an increasingly uniform global culture. Ideas of progress and permanence have found common expression in the incongruous concrete boxes found across the country. This project presented us with an opportunity to create a model for development that is as much about cultural sustainability, and the focus then was not merely inclusivity, but rather a celebration of the context. And for us the greatest reward was that, after seeing the resort, someone in a neighbouring village built a stone house for the first time in decades.

Text description provided by the architects.