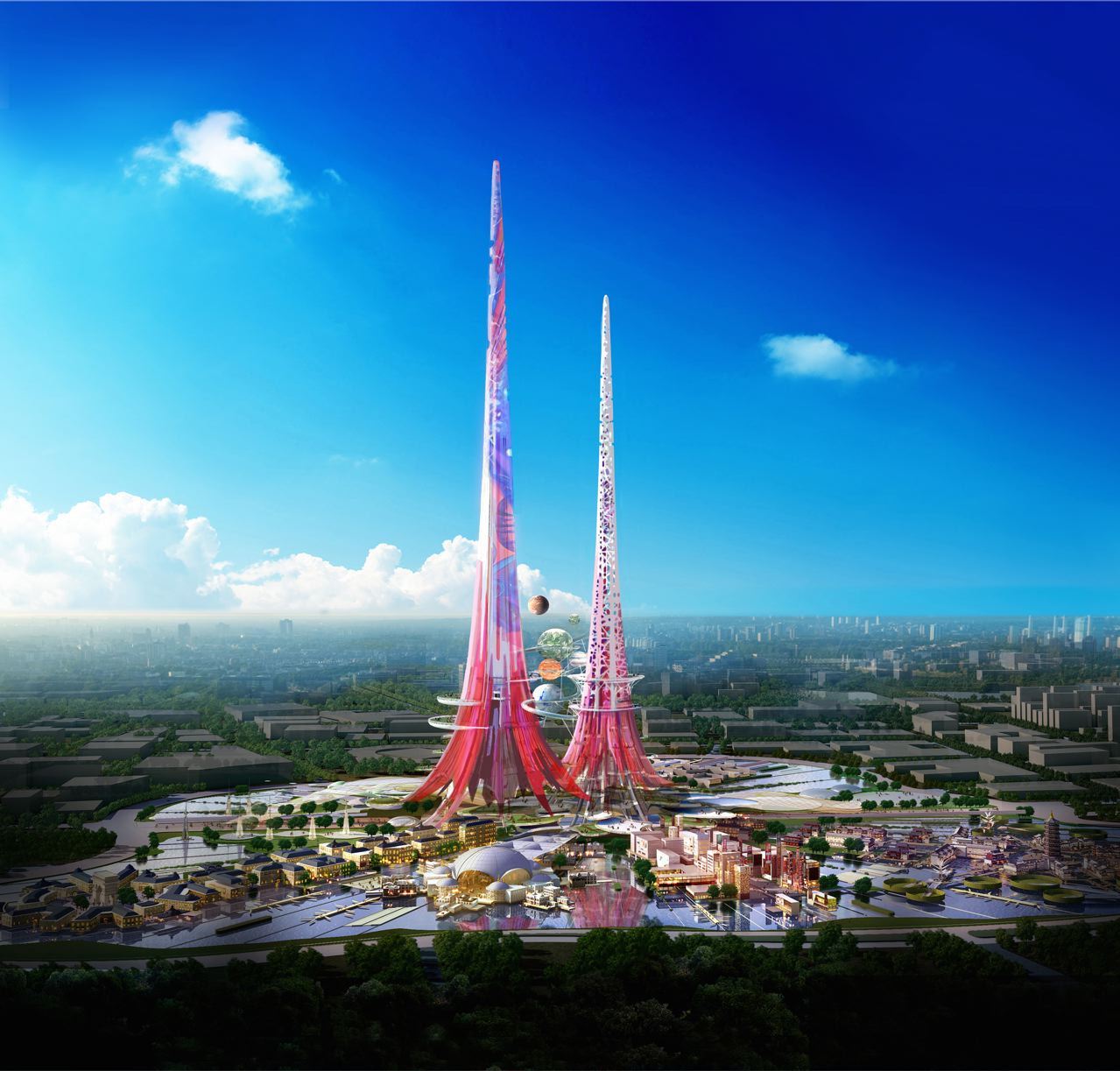 At 1km high, Phoenix Towers for HuaYan Group in Wuhan, The City of a Thousand Lakes, will be the world’s tallest pair of towers, a landmark within an ambitious environmental master plan for Wuhan, the capital of central China. The project is one of four master plans Chetwoods are developing with HuaYan in the region.

The Phoenix Towers incorporate design and technological features developed in the course of Chetwoods’ self-funded research projects and competition winning schemes such as an inhabited London Bridge for The Worshipful Company of Chartered Architects and The Royal Institute of British Architects. Their innovative technological features and symbiotic relationship will work to recycle and clean water and air to actively contribute to a reduction in local pollution. The towers cover seven hectares of a 47 hectare site, situated on an island in a lake, which is at the end of a 3km avenue within a dense city layout.

There are three large spheres which are suspended between the Towers, which represent planets orbiting the Towers. These will house restaurants which have a celestial theme and are accessed via ‘skywalks’ from the Towers themselves. The main Tower accommodates the World’s tallest kaleidoscope which is driven by a wind turbine at high level, creating a kaleidoscopic display when viewed up into the Tower from below.

In response to the client’s wish to develop a new style of architecture that emphasises Chinese identity, the use of a pair of towers reflects the dualist elements of Chinese culture in contrast to a more western monolithic form. Based on the traditional Chinese Phoenix symbol of two birds, male Feng and Huang, the plan was generated from the Yin/Yang form to represent perfectly balanced union. The Feng tower uses cutting-edge technology to ‘feed’ the Huang tower with renewable power in a symbiotic process.

This landmark project will showcase social, economic and environmental sustainability in China, providing an entertaining and instructive experience for local people and visitors. Chetwood expects the project to start on site within the next year and take at least three years to complete. It is anticipated that detailed design and construction will be supported by Citic as Chetwoods’ local delivery partners. When completed, The Phoenix Towers will be the world’s tallest structure, towering over 150 metres above the world’s highest building, the Burj Khalifa. Budget £1.2 billion. Structural features: A steel superstructure supported off a concrete core with ‘hat’ truss, a trussed structure at base, out-riggered for lateral stability with concrete buttresses has been designed in conjunction with UK engineers WSP.

Context: The scheme will provide the environmental catalyst to reinvigorate the city of Wuhan, actively avoiding the disastrous consequences of developments elsewhere in China. It will form the nucleus of a wider green strategy, linking Wuhan’s lakes environmentally and socially, with the region’s landmark destinations and lake district, along a 20km Green Wall of China to a new lakeside cultural tourist destination.

Situated on the Yangtze River at the crossroads of nine provinces, Wuhan, ‘City of 1000 Lakes’, with a population of 10 million, has recently been designated an environmental ‘super city’ by the Regional and Central Governments.