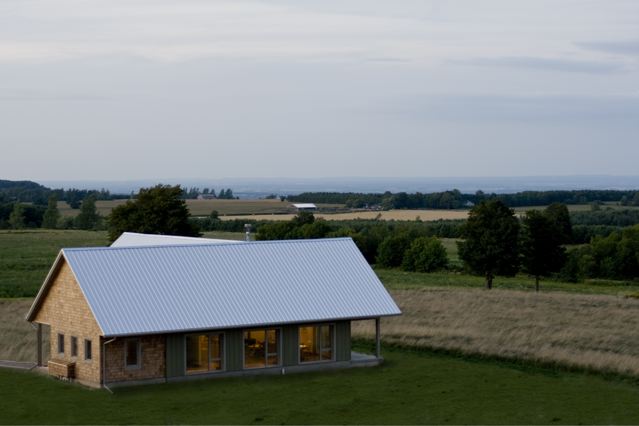 There are no photovoltaic panels on the roof. There are no solar thermal panels either. But the house on the hill near Black Bank, Ontario is designed to use the sun’s energy in a highly sustainable and pragmatic way.

When applied to builder-architects Christine Lolley and Tom Knezic, the term passive-aggressive means they are dedicated to achieving excellence in passive solar design. And they aggressively pursue affordable, local-made systems to include in their building projects.

This new-build by Solares Architecture is oriented toward the sun, with a deep summer-shade overhang above large south facing, Canadian-made triple-glazed windows and no north facing windows. Its envelope is so well insulated that its air-tightness score is 1.3 air changes at 50 kPa, compared to 2.0 for LEED Platinum (but not reaching Passivhaus standard at 0.6).

Its heating system is in-floor electric cabling encased in polished concrete, which was built at a fraction of the cost of hydronics. Yet it will still achieve impressive operating costs of just a few hundred dollars per year, as the integrated elements of the overall energy-wise design interact to manage heat energy in cool months, and subdue high temperatures during summer.

Beneath the 4” concrete slab are 6” of XPS foam insulation providing R-30, 6” of clear stone gravel for drainage and compacted engineered fill, down to undisturbed soil (There is no basement).

The walls were built from Durisol insulated concrete forms made of mineralized recycled wood chips and mineral wool insulation. The design of the block with the insulation to the outside of the wall puts more thermal mass on the inside of the home. They also added 1.5″ of soy spray foam, to achieve R-40 in the walls. The insulated attic below steel roofing achieves R-60. “I love steel roofs for several reasons,” says Lolley. “They achieve a very high heat-reflection co-efficient. They recycle easily, unlike several sets of asphalt shingles over the same time period, which would all go straight to landfill. Steel roofs are warranted for about 50 years, but I’ve seen them last for 70 years or more.” The mechanical design included a Canadian-made energy recover ventilator that performs at 94%, which was custom-retrofitted with a baffle device to avoid the effects of prevailing north winds. It also included an unvented Bosch clothes dryer, usually used in condominiums. It made sense in this structure, because it actually helps heat the house in winter. The total heating load for a smallish 1700 square foot 4-bedroom home is about 10 kilowatts, which accounts for the affordable electric bill. “It’s important to keep today’s homes fairly small,” she says. “We need to be creative when we are resolving design challenges, rather than just adding space; which is not really a resolution.” It’s passive solar design, and it’s an aggressive effort to conserve energy.