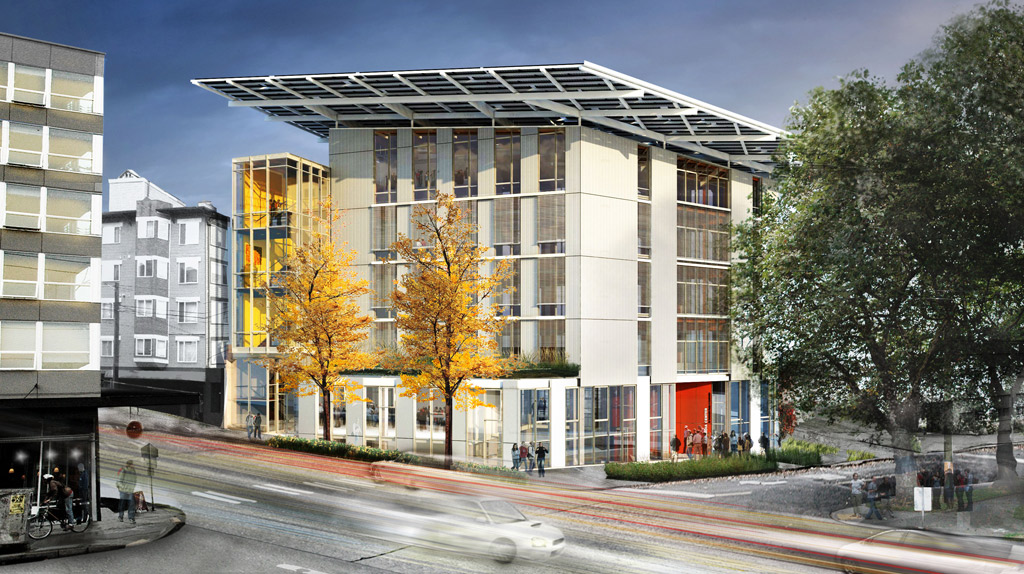 It was a daunting task – setting new global standards for environmentally-friendly design and construction – but the powers that be at the helm of Seattle, Washington’s $30-million Bullitt Center have never looked back.

They were aiming to create the greenest, most energy-efficient commercial building in the world – a self-sufficient structure, if you will, that would firmly cement the city’s reputation as being at the forefront of the sustainable building movement.

The aspirations for the six-story, 50,000 square-foot building, due for completion in the fall of 2012, were ambitious to say the least.
The project was meant to change the way buildings are designed, built and operated to improve long-term environmental performance and promote broader implementation of energy efficiency, renewable energy and other green building technologies.

High standards indeed, however they were all part of a quest to meet the lofty demands of the Living Building Challenge (LBC), the world’s most strenuous benchmark for sustainability.

“We went into this project fully aware that it could redefine the way we work,” says Brian Court, the project architect and design lead for the Bullitt Center.
“This has to do with the notion of performance-driven design process. I have to say that it truly has changed the way we work. We developed a toolkit on this project that has already affected numerous other projects in design.”

Conceived to function entirely off the grid, a solar array will generate as much electricity as the building uses and rain will supply as much water as needed, with all wastewater treated onsite, including composting toilets.

Aiming for the sky was a necessity if they were to meet the stringent LBC requirements. Not only does LBC insist on net-zero energy and water systems, but projects must also use half the energy required to get LEED (Leadership in Energy and Environmental Design) platinum certification.

“There is a lot of interest in the project,” says Mr. Court, an associate with the Miller Hull Partnership. “We have gotten information requests from numerous locations world-wide, and we even had the President of Bulgaria come to Seattle for a presentation and tour.
“We have also received a fair amount of criticism as well but are comforted that so many people are paying attention – of not only sustainability, but energy, toxicity of materials and environmental footprint.”

The project originated with the Bullitt Foundation, whose mission statement reads: “To safeguard the natural environment by promoting human activities and sustainable communities in the Pacific Northwest.” It’s vision? “A future that safeguards the vitality of natural ecosystems while accommodating a sustainable human propulation in healthy, vibrant, equitable and prosperous communities.”

Miller Hull Partnership, and their collaborators, were challenged to develop a core of concrete, steel and and timbers with a life expectancy of 250 years. This is a far cry from the standard 40-year life span applied in commercial buildings’ value appraisals. Those tweaks didn’t come without added budget costs, which led to financing realities for the estimated $30-million project being subjected to some criticism and controversy.

But that did not deter the Bullitt Foundation.

And during the course of construction, Mr. Court said the team has shifted gears, adapting to a number of design discoveries made.
“Our ability to quickly analyze natural daylight levels at all stages of the design process has taken a quantum leap forward,” he says.
“Energy and water efficiency gets a lot of attention on this project, but we have been equally excited to learn more about heavy timber as a structural system; discoveries we made while conducting life-cycle analysis on various structural systems.
“Timber has so many great qualities from an aesthetic point of view that its environmental virtues are often overlooked.”

At the end of the day, they believe the end product will remain true to one of its core intentions – to create an office place where every worker has access to fresh air and daylight; to create a healthy human environment that is more pleasant and productive than most commercial buildings.
As it turns out, however, it seems Bullitt Center has actually outdone those basic objectives – and by a longshot, at that. GB