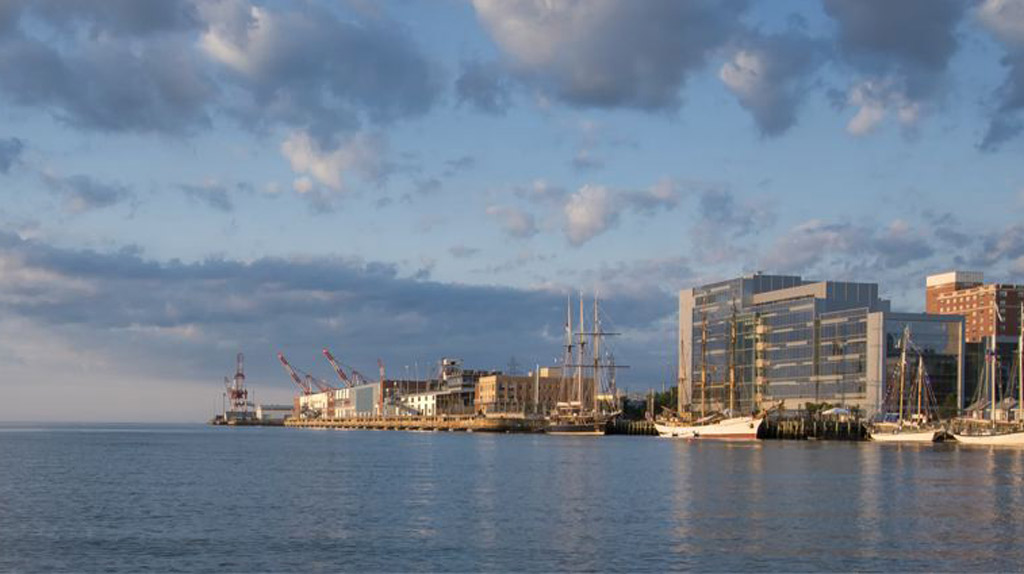 Among the best and most environmentally sustainable new buildings in Halifax is the headquarters for Nova Scotia Power, a contemporary 8-storey office tower. It revitalized a former coal-fired power plant, which closed during the 1970s. The site and structure received a wholesale makeover by WZMH Architects, achieving significant environmental, economic, and community responsibility objectives along the way. The facility houses more than 500 employees in approximately 18,000 square metres of space.

The LEED Platinum project was recognized with a Lieutenant Governor’s Award for Excellence in Engineering of a refurbished historic building, two ARIDO awards for interior design and was a finalist for the 2010 international re-skinning award from Zerofootprint. WZMH Architects has successfully incorporated sustainable principles into the majority of its projects in recent years and has received numerous domestic and international LEED awards.

The building occupies a prominent location with significant frontage on the downtown boardwalk that lines the western edge of the Halifax harbour. An innovative construction strategy acknowledges the memory of the building’s initial use. The original steel structure was retained with additional floors inserted and skylights replaced chimney stacks along the roof.

The original concrete mass formed a barrier to the waterfront. A portion of this has been transformed into an atrium, which now connects the city to the water, offering spectacular views of the harbour. Public space includes a galleria and indoor street parallel to the boardwalk, and a cafe with outdoor seating. They promote casual interaction between employees and user contact with the waterfront.

WZMH designed the building to meet the strategic goals of Nova Scotia Power (NSP) in the environmental, economic, civic and social realms. As the provincial power authority, NSP sought a visible demonstration of its commitment to environmental responsibility and leadership in energy conservation through the adaptive reuse of the former power plant. Its financial analysis had established that renovation of an existing proprietary property was the optimal solution in terms of space requirements over time. In addition, by redeveloping an urban brownfield, NSP could demonstrate civic responsibility and participate in urban intensification. It did not increase urban sprawl by locating a new building on prime farm, wetland, or forested land; and it promoted the use of existing amenities and infrastructure. It also retained employment within the city, supporting the economic and social fabric of downtown Halifax.

The Atrium and Galleria provide more than 75% of occupied spaces with natural daylight. In other areas high efficiency fixtures, occupancy and daylight sensors are used to reduce reliance on artificial light. Annual electricity consumption for lighting is about 22 kWh per square metre, about 10-15% of total electricity consumption of the building.

Water efficient plumbing fixtures reduce potable water use and a 43 cubic metre cistern collects storm water for toilet flushing. Landscaping consists of turf grass that is drought-resistant and requires no irrigation. Water consumption is about 24 litres per person each day, representing an improvement of about 75% over the reference building.

Existing piping from the Halifax harbour, originally used to cool power turbines, brings sea-water into titanium heat exchangers, then into a heating-cooling loop. Heat pumps in turn supply chilled beams and perimeter heating. A bypass for free cooling is also included. The Chilled Beam system uses an induction unit to cool outdoor air and supply it to occupied spaces. It improves thermal comfort while utilizing less fan energy. The system can use rejected heat from cooling the south areas to heat the north side of the building.

Projected annual electrical consumption for the building is 792 mega-joules per square metre (including regulated loads and plug loads). The use of harbour water for heating and cooling will mean that as fossil fuels are phased out in the future, the entire building will operate using renewable energy.

At least 25% of total building materials were extracted and manufactured within 800 km by truck and 2,400 km by rail or sea. Steel was recycled off site and the rubble from window openings in the concrete was used as fill to adjust site grades. In total, 86.9% of waste materials were recycled during construction. At least 85% of all wood-based building components were FSC certified.

The location is near two bus lines and 48 bicycle racks were included along with shower and change facilities. Auto Share high-efficiency vehicles are also provided.

An interactive kiosk in the main lobby showcases sustainable design features with actual energy consumption displayed and updated quarterly. Building performance can be compared to the design stage modeled performance.

WZMH Architects was established in 1961 in Toronto, and has built a reputation for innovative design and technical expertise. It now employs more than 100 people who utilize a collaborative approach to meet client expectations for corporate projects, courthouses, hotels, conference facilities, retail, resorts, entertainment complexes, educational and residential buildings.