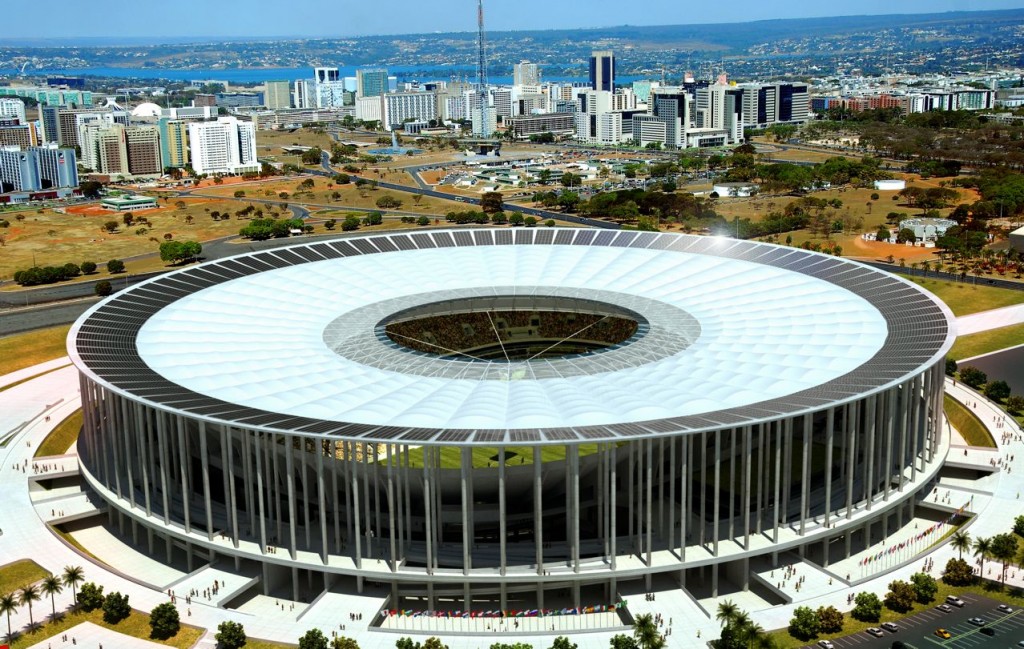 By the time the 2016 Olympic Games are underway in Brazil, the world will know all about a ground-breaking showcase eco-arena located in the heart of the nation’s capital, Brasília.
Brazil’s national stadium, or Estadio Nacional de Brasília, will get more than its share of global attention long before 2016 – as it will be the centerpiece for soccer’s 2014 World Cup.
Designed by Castro Mello Arquitetos of San Paolo, with Ian McKee, LEED AP, serving as green building and sustainability manager for the project, the stadium is aiming for LEED Platinum designation. Work is continuing leading up to the World Cup in June 2014.

With a seating capacity of 68,009, the stadium will have a number of environmentally-conscious features.

Right off the top, 90 per cent of the materials from the original demolished stadium are being  recycled or reused onsite. There is a rainwater harvesting and reuse system, water-saving plumbing fixtures, a two-megawatt solar photovoltaic (PV) system and LED lighting.

Of special note: Potable water consumption will be reduced by more than 80 per cent. And a breathable façade will provide sufficient ventilation in the seating bowl and main concourses.

“The large white roof protects the building and the area around the bowl and the inner bowl,” McKee explains. “The roofing reduces the heat island effect. And the solar power integrated into that roof improves overall energy efficiency.” The site will feature habitat restoration with native plantings and improvements to pedestrian access. The stadium’s location in the center of Brasília allows for bike valet parking for 3,500 bikes inside and around the facility—unprecedented bike parking capacity for a stadium. Because more than 50% of emissions related to stadium operations are related to fan transport to and from the event, the design team felt it was critical to provide alternative, emissions-free transportation options.

“When we tell people they will be able to ride their bikes right into the stadium and drop them off with a bike valet, you can see it in their eyes … that this is going to be a new stadium experience,” says McKee.

The project is expected to be the first net-zero energy stadium in the world and a net energy producer. While the solar PV system is estimated to produce 2.8 million kilowatt-hours (kWh) annually, the project is only expected to use approximately two million kWh per year. As a result, the remaining energy produced will be passed on to Brasília.

Outside the stadium, the design team has hoped to draw attention to an area geared to “pleasurable, healthy” experiences.  More than 6,000 native plant species will be planted, ideally creating a rich and diverse park open for all to enjoy.  Walkways will be permeable for water absorption into the soil and lightly colored to further reduce the heat island effect.

Additionally, swales will capture and direct stormwater runoff from parking areas, cleaning the water and removing chemicals and solids. The deposits will be placed in a man-made lake for possible reuse inside the stadium.

These strategies, aided by recycling and composting initiatives, will allow stadium visitors to learn about sustainable living, landscaping, engineering, as well as green design and building, McKee says. “The stadium is really designed for the local environment, fully focused on sustainability,” he adds. “And it’s an effort to have Brazil recognized as a model for the world to follow.”