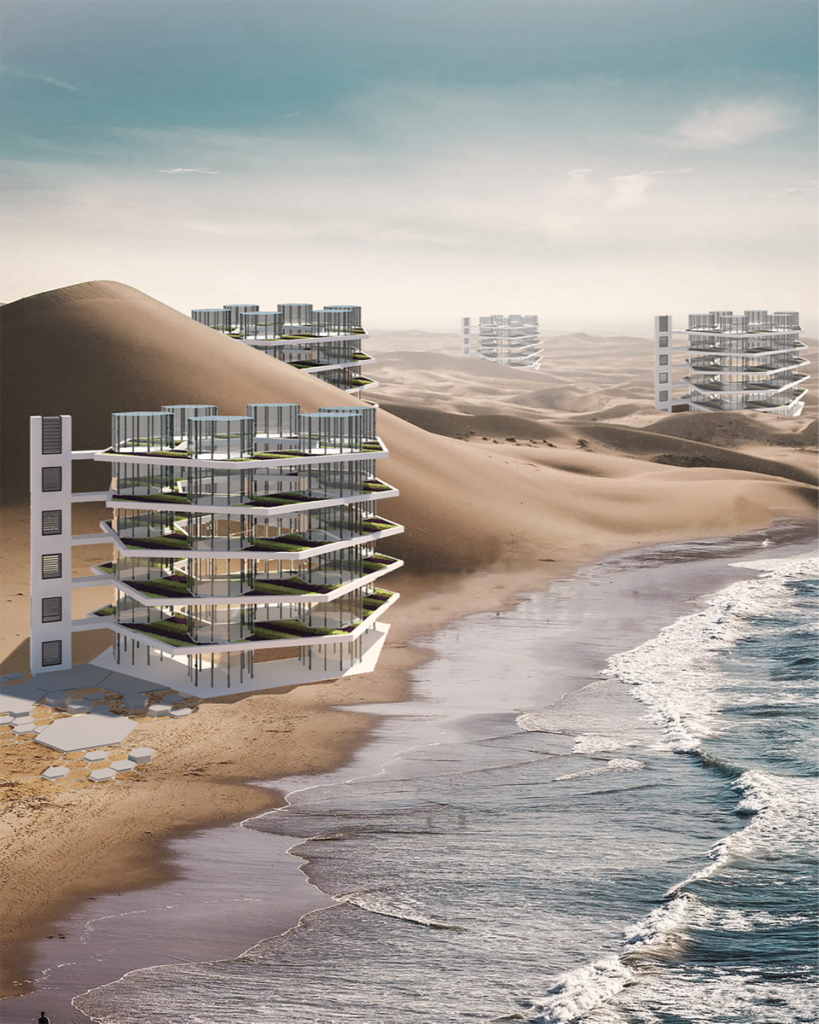 Carlo Milessa isn’t one to rest on his laurels.

In great detail, just a few short months ago, Milessa drew attention to his novel approach to architectural design – the Milessa Modules, a hexagonal housing cluster that essentially resembles a honeycomb.

Already, though, he has tweaked the initiative, by adding a vertical garden element that would see these similar buildings perfectly suited for construction in deserts bordering saltwater seas. The high-rise model is a hybrid, utilizing Milessa’s original module design.

“I call this ‘Make Deserts Bloom,’” says Milessa, who originally came up with the Milessa Modules concept over 50 years ago, then kickstarted it earlier this year. “You can place the five-storey structures in the desert, near the sea. Due to the hexagonal shape, with vertexes pointing north and south, sunlight can be allowed in, during the morning, noon and afternoon. “With the structure close to the sea, filtration systems will be applied and then fresh water can be pumped to the top, and sprinklers will make it ‘rain’ on the Milessa Modules below.”

This is a new development, and one that Milessa believes will pique interest in his work. The essence of his visionary concept remains, however, and he is convinced the Milessa Modules will find a niche market.

Bolstered by a tie-in to climate change concerns, the original Milessa Modules’ approach is a concept that involves having six hexagonal buildings arranged in a large hexagonal shape, all connected by outside walls, with a seventh building placed in the centre of a courtyard.

“If you can build one, you can build many,” Milessa says. “Mass production of the modular buildings would significantly lower the cost compared to traditional housing options. This would make the modules appealing to both Canadian and international markets.”

Previously, he explained that the hexagonal modular setup could be utilized in many ways. Milessa says housing units, holiday rentals, greenhouse, retirement communities – even summer camps – would be ideal common-sense fits for Milessa Modules. He stresses that the unit’s hexagonal shape allows for more efficient use of space, but what really creates a winning alternative to traditional housing are the green building features.
Many of his ideas were met with dubious reactions back in the Sixties, when first unveiled at the National Home Show in Toronto, but seem to be the status quo heading into 2018. He points to the use of gardens, rainwater collection systems, natural light and solar panels as examples of how developers can maintain an eco-friendly and cost-efficient operation.

As to the addition of the vertical gardens, Milessa explained that they seamlessly complement the original design.

“Essentially, with these high-rise structures in a desert near the sea, you would have concrete slabs sitting on top of each other, with spans of 12 feet between them,” he says. “That will accommodate an equal number of Milessa Modules’ spaces for roof gardens.” Keeping in line with his think-outside-the-box mentality, Milessa speculates on other positives that could be derived by utilizing Milessa Modules.

“I continue to explore the advantages of variable geometry architecture in planning a modular components synthetic biosphere for a future space academy,” he says. “They could be used for space farms to feed scientists, deep space exploration or storage units for space-based mineral reserves. There’s also the fact that an air pocket can ben created if the module is turned upside down in the water. This could turn into development of a subsea wellhead maintenance and ocean floor exploration platform, where rare minerals could be accessed.

“I am also concentrating on the rain harvesting feature. This could capture rainfall in cisterns and create small artificial lakes. That could be very impactful for the dry regions of the world.”

FYI
Carlo Milessa has mailed information pertinent to his ongoing research on variable geometry to architectural firms. He says his business plan involves this strategy: When a U.S. firm wants to utilize Canadian intellectual property, in this case Milessa Modules, it will contact the appropriate Canadian trade commissioner, looking for a joint venture with a Canadian architectural firm. Then Milessa will be contacted for the adaptation rights. Up to this point, Milessa says he has been in talks with companies in China, Malaysia and India regarding possible furnishing options for the modules. Additionally, a book on Milessa Modules, authored by Milessa, can be found in various university libraries, including the University of California, Los Angeles.