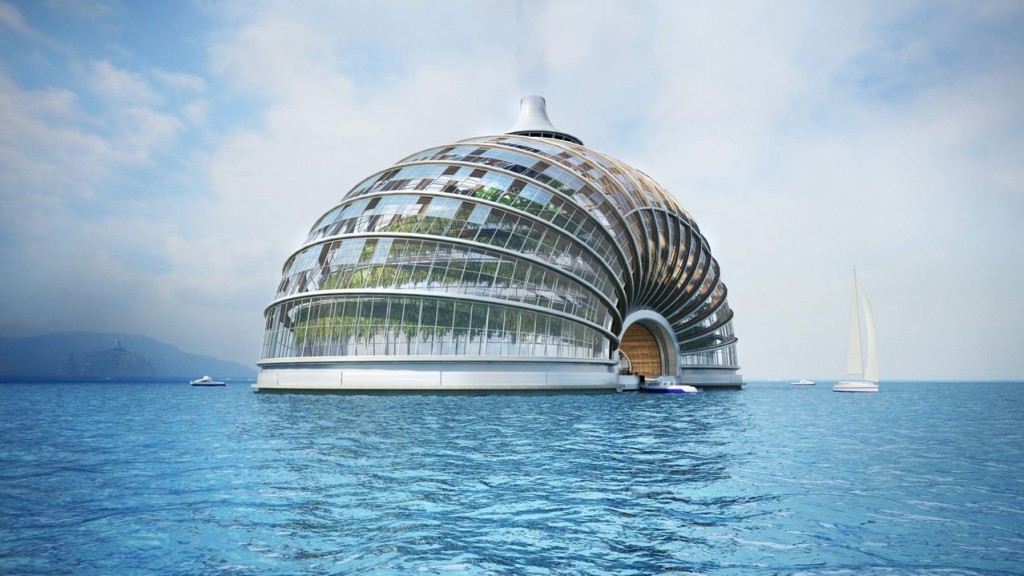 With climate change trends constantly drawing more and more attention around the world, it’s no coincidence that architects are tackling new survivalist-type designs.

Case in point: Russian architect Alexander Remizov.
Remizov, from the firm Remistudio, has taken direct aim at the problem of rising ocean levels and flood control. With apologies to Noah from the Bible’s book of Genesis, Remizov’s prototype creation, named The Ark, is a prefabricated structure that could be quickly assembled to deal with any emergency housing needs.

This energy-efficient domed biosphere would be built of steel, wood and durable-strength plastic with enough space to accommodate up to 10,000 people. Land-based in concept, it could also be positioned on water, with a rounded hull, allowing the structure to float. Hence the nickname.
Currently in the development stage as Remizov seeks investors, The Ark has a dome-like shape because it would utilize wind generators, with warm air accumulating near the top of the building. Solar panels will also be featured, with green foliage throughout and a rainwater collections system. If built on water, thermal water energy could be utilized.
In fact, heat would be collected in order to provide a constant energy supply for the entire complex, no matter what the outside environment is like. While the concept could be used for emergencies, the theme also leaves room for more traditional environments, and could also simply be a model for future living, including communities, offices and hotels.
With the building assembly focusing on the use of ready-made materials, each structure would have a buffer zone without the need for traditional insulation. With the materials used, and a light foundation, it’s believed construction costs could also be reduced.
Designed in conjunction with the International Union of Architects’ program called “Architecture for Disaster Relief,” The Ark also features a load-bearing system of cables and arches that would allow weight distribution – a key component when dealing with earthquake situations.
And the framework would be covered with a special foil – the durable-strength plastic – made of Ethylene TetraFluoroEthylene (ETFE), which is often called a miracle construction material. (Why? It’s strong enough to bear 400 times its own weight, for one thing, and can be stretched to three times its length without loss of elasticity, for another.)
The foil would be attached to the framework and then serve as a solar collector and also provide gutters for collecting rainwater from the roof.
As well as guaranteeing an uninterrupted energy supply, The Ark could also produce extra power for supplying adjacent housing or adaptable transportation. Moreover, The Ark boasts a bioclimatic design. This means it connects with nature and maximizes the benefit that can be derived from a site’s natural features, topography and climate, while allowing for internal comfort conditions to be optimized. In short, more than Noah ever bargained for … to be sure.