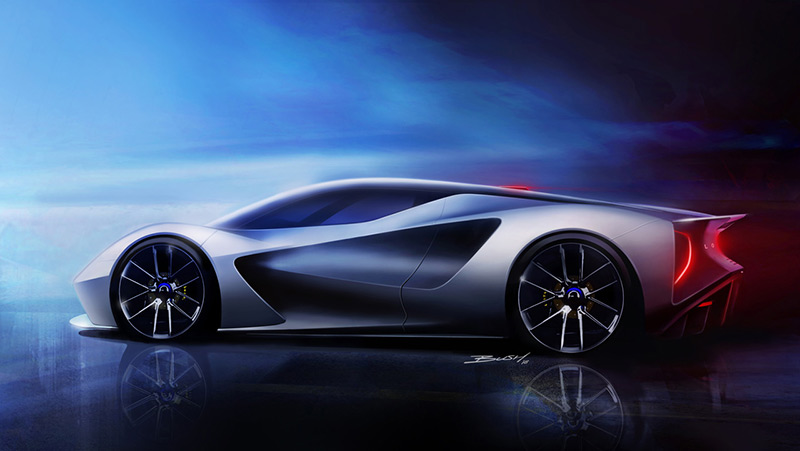 Welcome to the age of the electric hypercar, and Britain’s first entrant.

With unparalleled performance and a target power output of 2,000 PS, it sets new standards in terms of advanced EV engineering. Quite simply, the Lotus Evija is the most powerful series production road car ever built.

Like all Lotus cars throughout the brand’s storied 71-year history, the Evija has been precision-engineered to deliver an outstanding driving experience both on the road and track. It is the most dynamically accomplished model ever built by the company, setting new standards for Lotus driving performance. Above all else, it is ‘For The Drivers’.

As a name, Evija (pronounced ‘E-vi-ya’) means ‘the first in existence’ or ‘the living one’. It is highly appropriate; Lotus has an unquestionable reputation for its pioneering approach in both automotive and motorsport.

Exclusivity and desirability go hand in hand in the world of hypercars, and the Evija is blessed with an abundance of both. Production is limited to not more than 130 examples, making it among the most exclusive cars ever launched. It’s a figure set in tribute to the car’s project code, Type 130. Lotus road and race cars throughout the brand’s seven decades of success have been assigned a Type number, and the Evija is no exception.

Lotus Cars CEO Phil Popham said: “This is another amazing moment in the history of our company. The Evija is a true Lotus in every sense – it has been developed with an unwavering passion to push boundaries, to explore new ways of thinking and to apply ground-breaking technologies.”

A stunning piece of contemporary automotive design, the Evija features a dramatic Venturi tunnel through each rear quarter, giving it a truly breath-taking presence.

The Evija is the first Lotus road car to feature a one-piece carbon fibre monocoque chassis. The cabin, from the fully adjustable race-style seats to the multi-function steering wheel, is the very pinnacle of motorsport-inspired road car design and technology.

At the heart of the Evija is an ultra-advanced all-electric powertrain. It has been developed with technical partner Williams Advanced Engineering, famed for success in motorsport, from Formula One to electrifying the first four seasons of Formula E. The battery pack is mid-mounted immediately behind the two seats and supplies energy directly to four powerful e-motors. This highly efficient system is the lightest, most energy dense, electric power package ever fitted to a road car. With a target weight of just 1,680 kg, it will be the lightest pure electric hypercar ever to go into series production.

Engineered for precise and sustained performance, the Evija has five driving modes – Range, City, Tour, Sport and Track. It can race from 0-62 mph (0-100 km/h) in under three seconds and accelerate to a top speed of more than 200 mph (0-320 km/h).

The most striking element of the Lotus Evija is its exterior. From every angle the full carbon fibre bodywork is stretched taut, appearing shrink-wrapped over the mechanical components. Crouching low to the ground, with a ride height of just 105 mm, the pronounced muscular haunches envelop the teardrop cabin that sinks between them.

Taking inspiration from the aeronautics industry, the exterior is a perfectly proportioned blend of fluid formsand crisp lines. This is clearly illustrated by the gently curved but sharp leading edge of the bonnet, which is reminiscent of so many classic Lotus road and race cars.

True to Lotus founder Colin Chapman’s core belief that every component should serve multiple purposes, the exterior design is also exceptionally efficient on every level. The most obvious example of this – and unquestionably the most dramatic element of the exterior – is the Venturi tunnel which pierces each rear quarter. Inspired by Le Mans race cars, they optimise air flow by directing it through the bodyshell.

When viewed from the rear of the car, each tunnel is edged with a red LED to create a striking ribbon-style light signature. The result is a stunning visual effect that’s akin to the afterburners on a fighter jet, especially when seen at night. As an extra detail, an LED hidden within each tunnel illuminates its interior.

The directional indicators are incorporated into the corners of the ribbon, while the reversing light is provided by the illuminated ‘T’ of the ‘LOTUS’ wordmark above the integrated charging flap.

Another key feature of the Evija’s sophisticated aerodynamic system is the bi-plane front splitter. It’s another illustration of form and function working perfectly in tandem. Designed in three sections, the larger central area provides air to cool the battery pack – mid-mounted behind the two seats – while the air channelled through the two smaller outer sections cools the front e-axle. Lotus aficionados may notice a respectful nod to the iconic Type 72 Formula 1 car, with its square front central section and two side wings.

The Evija is the first Lotus road car to ever feature a full carbon fibre chassis. Moulded as a single piece for exceptional strength, rigidity and safety, the full length of the underside is sculpted to optimise downforce. It includes an integrated air diffuser, which extends from under the B-pillars to the rear.

The absence of traditional door mirrors plays a part in reducing drag. Cameras integrated into the front wings are electronically deployed on unlock, while another camera built into the roof provides a central view. Images are displayed on three interior screens.

With target figures of 2,000 PS of power and 1,700 Nm of torque, the Lotus Evija is the world’s most powerful production road car. Key to that exceptional power output is the 2,000 kW lithium-ion battery, supplied with its management system by Williams Advanced Engineering (WAE) as part of a joint venture with Lotus to collaborate on advanced propulsion technologies. WAE won a 2018 Queen’s Award for Enterprise for translating its EV expertise from the race track to road-going vehicles.

The battery pack is mounted centrally behind the passenger compartment, and its cover is visible through the glass rear screen. This positioning delivers significant advantages in terms of styling, aerodynamics, packaging, weight distribution, occupant comfort and dynamic handling. It also supports fast and convenient servicing and maintenance. Furthermore, the set-up has been designed so that in the future alternative battery packs – for example, to optimise track performance – can be easily installed.

As with every Lotus, the Evija is ‘For The Drivers’ and its searing pace is delivered in one seamless, sustained surge. The 0-62 mph (0-100 km/h) sprint is completed in under three seconds, while the top speed is in excess of 200 mph (340 km/h).

These headline statistics only tell part of the car’s performance story. Matt Windle, Executive Director, Sports Car Engineering, Lotus Cars, explained: “The Lotus Evija has astonishing acceleration at higher speeds. It takes less than nine seconds to reach 300 km/h which is better than any other direct competitor.”

A revolution in charging

Not only does the Lotus Evija feature the world’s most powerful automotive drivetrain, it also boasts the world’s fastest charging battery. Thanks to the partnership with Williams Advanced Engineering, the battery has the ability to accept an 800kW charge. Although charging units capable of delivering this are not yet commercially available, when they are it will be possible to fully replenish the battery in just nine minutes.

Using existing charging technology – such as a 350kW unit, which is currently the most powerful available – the Evija’s charge time will be 12 mins to 80% and 18 mins to 100%. The car’s range is 250 miles (400 km) on the WLTP Combined Cycle, or 270 miles on the NEDC Combined Cycle. Lotus is in discussions with external suppliers on a charging solution for customers.

The interior of the Lotus Evija is as dramatic as the exterior. Inspired by the technical precision of race car engineering, the dominant characteristic of the cabin is the ‘floating wing’ dashboard which can be glimpsed from outside through the windscreen. The design also echoes the porosity of the exterior.

Access to the cabin is through the two dihedral doors. Handle-free to preserve the sculpted exterior, they’re operated via the key fob. It’s the first time Lotus has used such doors, and while they make for a moment of dramatic theatre they also provide maximum space for getting in and out.

The design of the steering wheel, similar to that found in an LMP or F1 car, further reinforces the Evija’s sporting intentions. The outer ring is finished in Alcantara as standard with leather available as an option. Buttons are grouped in an intuitive manner and govern functions including phone use, cruise control and DRS deployment.

Ahead of the steering wheel is a state-of-the-art digital display, providing the driver with key information such as mode, battery charge and remaining range. It is the car’s only screen, putting all necessary information in one place. The screen displays essential functions only, with information appearing as required when the appropriate button is pushed, then fading when no longer needed.

Climate control and a premium infotainment system are fitted as standard. Customers can seamlessly integrate their smartphones via Apple CarPlay and Android Auto, accessing their own music and navigation.

World-first laser lighting technology The Lotus Evija is the first production road car in the world to feature laser lights for both main and dipped beams. Produced by Osram, the lighting modules are very compact and will provide an outstanding view of the road or track ahead.The strikingly thin vertical headlamps provide the perfect balance of crystal-like beauty and a highly technical design. Inside the lenses, unique ‘wing-like’ elements form the daytime running lights and directional indicators.

Connected to the cloud

The Evija is the first Lotus to provide drivers with a full suite of digital connected infotainment, which will benefit from over-the-air software updates. A powerful on-board modem enables communication to the cloud, and the driver can interact with that data through a Lotus smartphone app. The app will enable drivers to monitor their Evija from anywhere in the world, for example, to check the battery charge status and driving range. It will also support remote use of air-con, to heat or cool the cabin ahead of the next drive.

The ultimate in personalization

Lotus will offer Evija customers an unparalleled level of personalisation, enabling them to specify the car exactly as they wish. This will include the opportunity to select unique paint finishes, interior trims and detailing.

Marquetry-style badging will provide further bespoke opportunities. Lotus has developed the ability to inlay metal elements directly into the carbon fibre bodyshell, so that the badge sits completely flush with the bodywork. Currently the Evija carries a partial Union Flag badge on the C-pillar, signifying its status as a British-built hypercar. However, this could be another flag, a family crest or personal logo.