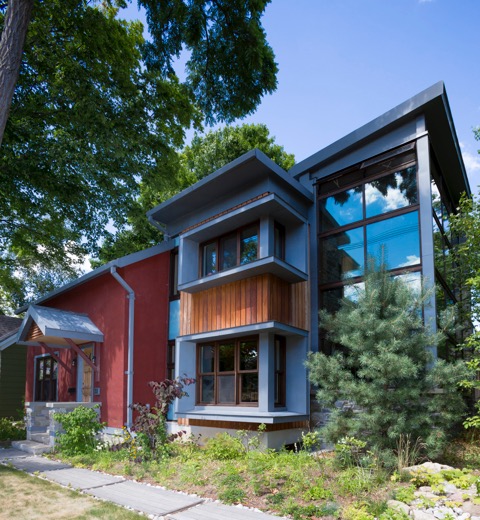 It’s often said that experience is the best teacher.

In the case of Matt Gilgan, the eldest son of billionaire homebuilder Peter Gilgan, of Mattamy Homes, truer words have never been spoken.

His learning curve began early on. Born and raised around new home construction, he saw, first hand, the amount of waste of materials that went into traditional development. And, early on, he knew he wanted to do something about that – to promote a more responsible approach to land development and homebuilding.

“I have very unique, and broad, experience within large production construction,” says Gilgan, an artist and green entrepreneur, now promoting himself as a consultant for development of green buildings and/or green communities. “But I also have quite separate extensive research-based knowledge and experience with green building.”

That’s for sure. Back in the spring of 2009, Gilgan and his wife bought a property just a few steps away from Lake Ontario near downtown Oakville, Ontario. It had a neglected, dilapidated 1870s heritage home on it, but that didn’t deter Gilgan. He brought in architect Tom Kolbasenko of Milton’s Our Cool Blue, and together they began tackling one challenge after another. The old foundation had to be rebuilt, for one thing. Then, to incorporate Gilgan’s desire for walls made of straw bale, a Peterborough construction company joined the team. Then there were additions such as radiant floors, recycled materials, a geothermal system and passive solar heating.

All in all, the project dragged on for three years. There were snags with the town of Oakville, and Gilgan says his hands were often tied, due to certain restricting bylaws.

“But from the outset,” he says, “my ambition was to do the greenest possible thing.”

And so he embarked on a path that taught him valuable life lessons; lessons he now feels put him in good stead as a consultant or partner for others contemplating similar altruistic green building ventures. The end product on Chisholm Street in Oakville is the result of much sustainable experimentation and unexpected financial pitfalls. Gilgan was tremendously schooled, and now he’s keen on sharing his tips.

When construction was finished, Gilgan originally listed the home at $4.5-million. He said it sold for $2.15-million.

“The $4.5-million was to cover actual costs plus a very small administration fee for myself,” he says. “So many elements drove the costs up – tying an historic home to a new build, foundation problems, delays caused by financing and approval nightmares, plus the cost of financing itself. This was a one-of-a-kind experiment, though, and I have learned a heck of a lot from it, including the fact that I now know how to make any future projects more sustainable and financially sound.

“I would very much like to be involved in the planning and visioning of sustainable communities. I would love to work with a developer and/or builder to come up with a holistic community plan that would integrate some of the greatest green techniques and provide an affordable truly environmentally-conscientious option. I know I bring a unique combination of experience that has provided me with a broad understanding of the development mindset, design and approval processes, and implementation into built form.

“I believe that I could assist a variety of business types, not necessarily just home builders and developers. I can show them a fresh way of thinking about how to behave conscientiously, how to create systems and facilitate improvements of a more sincere and holistic nature than typical green strategies. By taking a more sincere approach, I believe businesses stand to benefit greatly by distinguishing themselves more clearly from competitors, by improving company morale, and becoming a more desirable employer.”
Gilgan has strong views on what constitutes true sustainable building strategies. And he questions many so-called “green advancements” as little, or no better, than the status quo.

“The most advantageous green practices are still largely ignored,” he says. “For example, technological solutions like higher-rated windows, which are made out of environmentally-disastrous petrochemicals, provide way less improvement to a home’s overall insulation value than does straw bale wall construction.

“The use of straw is not patented by anyone, it’s an ancient well-proven technology that uses material we have in abundance around the world, a waste product of agriculture, to create a more durable and incredible building envelope.

“Straw walls breathe, as opposed to current wisdom which traps homeowners inside a plastic bubble to breath in all the toxic fumes that are emanating from the numerous materials used inside the home. “Similarly, one of the oldest architectural principals – paying attention to the sun and the way your home is situated relative to the sun – seems to have been long forgotten. New developments could instantly reap enormous energy savings through this one simple step at negligible cost increase.”
Looking ahead, consulting is certainly an option for Gilgan, but it’s not his most ardent goal – not by a long shot.

“I’d be very keenly interested in partnering with an individual, group or company that was wanting to take on a green project of some kind,” he adds. “In fact, I’d probably much prefer that to a consulting gig.”