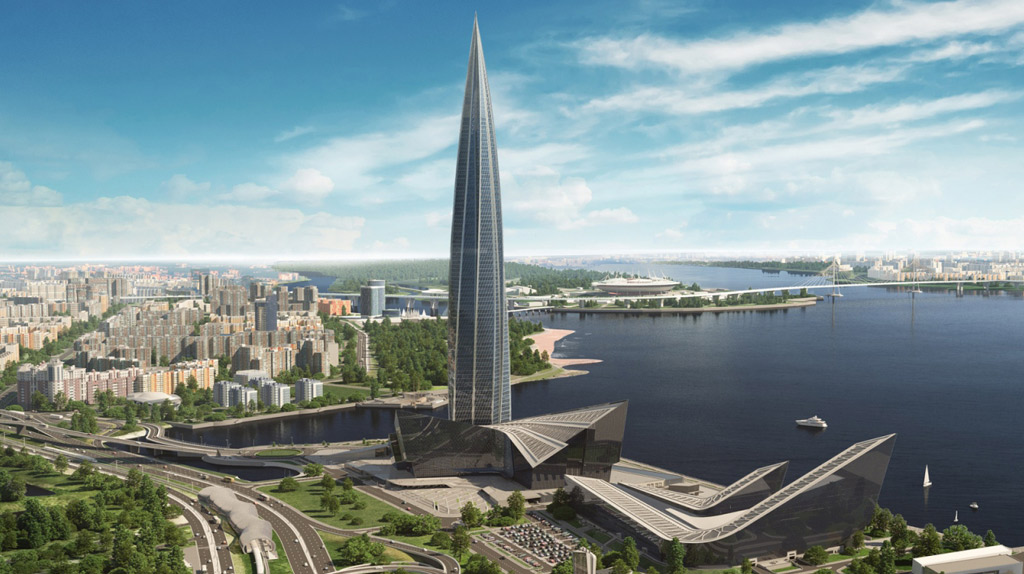 The RMJM-designed Lakhta Centre in St Petersburgis Russia and Europe’s tallest building – standing 462 metres high. The twisted supertall skyscraper, is the 13th tallest building in the world. Developers Gazprom, a Russian gas company that will occupy most of the building, also claim it to be the “northernmost skyscraper in the world”. The project of a business center with a high-rise landmark and base buildings was selected as a result of an international architectural contest conducted by the investor in 2006. The winner of the contest was RMJM company (Tony Kettle Design Director) which proposed a project complying with the requested functions of the future headquarters of a large energy company and concordant with the architectural traditions of Petersburg. The architect’s task was to implement the project of a new ultramodern skyscraper in the city with a rich cultural and historical context, the historical centre of which is included in the UNESCO World Heritage List. Tony Kettle, the author of the architectural concept of the Lakhta Center: “The flowing forms of water, the glinting spires of the Peter and Paul cathedral, the size of the sky canvas above the horizontal grain. My sense was very much to create something that was as light and elegant as the historical forms, capturing the changes in daylight in a similar way to that of the golden domes and spires.” “The tower was designed as a simple organic spire with asymmetrical movement in its skin, to be seen as a singular landmark at city scale. Underlying the simple elegance of its exterior there are actually five individual twisting towers, each with its own glazed skin. These come together and taper around a diminishing circular core, enveloped by a further insulating skin.” The main architectural motives of Petersburg are reflected in the concept of a business center. It is a theme of a lonely spire in the horizontal landscape, and leaning base buildings symbolizing the ship hull, and maritime theme of wave-like bearing structures. An organic form of the building symbolizes the power of water, the flow of space, openness and lightness. The effect of free fall and maximum blending of the future complex with the environment will be emphasized by the glass of a special type, owning to this glass the tower will change its colors creating a feeling of a living being. Lakhta Center incorporates a number of innovative energy-saving technologies into its design. A double-glazed façade increases the level of thermal insulation, leading to a reduction in heating and air-conditioning costs. An airy space between the façade skins will provide both thermal insulation and natural ventilation. In winter it allows keeping warmth and in summer coolness inside the building. An additional saving of power energy will be achieved by substituting conventional heating devices to infra-red radiators and applying the solution which allow re-using the heat emitted by technical and household devices in order to supply heating to the building. Similarly, the premises will be heated using excess heat generated from working technical equipment.