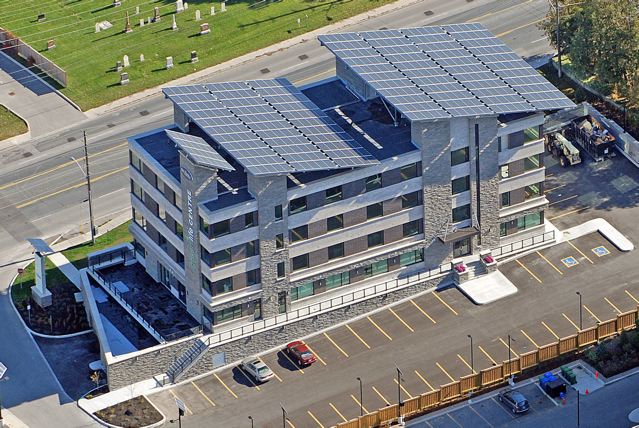 Every day an article is written which we may read; a news item reported and delivered to our electronic gadgets, or a television program watched that rightfully draws our attention to the problems of global climate change and our inevitable need to think more sustainably. Whether this movement’s origin is academic, social or government driven, the basis for it can be traced back to early scientific measurements of our climate, from analyses of our living patterns and habits to the earth’s movement. Since the very beginning of an interaction between science and measurement, we have grown increasingly aware of our collective footprint.

This measurement based research continues to demonstrate growing problems with weather, energy demand, food production, ocean deterioration and survivability of our ecosystem as a whole. At the basis of these problems is energy itself, its’ consumption, and our reliance on all that is produced from yesterday’s resources using yesterday’s technology. From a society that considers itself forward, we use less than 1% of 1% of what energy falls upon this earth every year, and yet what we use is almost exclusively sourced by antiquated technologies and means, in spite of many advancements we continue to develop. Old plants and animals dead for hundreds of thousands of years trapped in some of the most difficult places remain the beacons of interest, subject to herculean efforts to bring their fruits into our lives, as we burn them then cast their remnants and refuse aside, the consequences of these actions which we continue to ignore, relying on distant optimism almost as though we will find another atmosphere, a better technology, a cleaner ocean, another world.

Then we have the advocates, those upon whom we rely to guide us forward, the institutors of change, the promulgators of hope. These may be the pioneers who craft clever buildings that reach tall into our skies, towers decorated with elaborate furnishings. These are the architects and engineers who have advanced intricate systems featuring new ideas for old objectives. I say old objectives, as we really don’t wish to live thousands of feet up in the air nor underground. Traditional yet antiquated needs which may continue to increase if for no other reason than the tradition of a once sustainable lifestyle, regardless of a world population, which now stretches beyond 7 billion people. It is the continued practice of these billions of people which guarantees the need for change. Imperatively so, the solution for the world as a whole requires and insists that alternate building systems must be achievable on this scale. As an example, a closely related problem facing the world is an inability to produce sufficient food for its’ masses, yet will not be solved by newer and better recipes for lobster or beef wellington. Most eat corn and wheat. Refining the standards of the upper echelons does nothing to address the growing and gaping hole that our burgeoning population will inflict on our natural resources.

Similarly the pressing need for sustainable building will not be satiated by elaborate architecture festooned with floating gardens and tagged with billion dollar budgets. The obvious conclusion to our immediate dilemma, must be that sustainable must also mean attainable.  After all, what good is a solution if it has no real application other than to prove the academic veracity of a concept? What purpose is there served by highlighting new systems that have no chance of implementation by anyone other than governments?

Equally so, is the dissuading affect such intricate designs have on the building community. (Do you mean to say the distractions?)They serve to ensure than building green means building in the red. Little review is necessary by the average builder to see that “in the sky” ideas should be ignored if survival is at stake. (This really doesn’t read clearly) Conversely, the development industry, upon whom the real solutions rely, would (should?) take the lead if the new technology were cost effective and accepted by the market. As an example, a new system building unit that sells for the same as the old, but costs less to operate is the recipe for the future. Making the average person the target of your market is not only noteworthy, but good business. To advance ideas which can only be afforded by 1% of 1% of the population means that you are only that fraction successful, but building a real solution for all, solves the larger problem. Now everyone is on the same page. I think this paragraph is trying to speak towards the intentions of the development community and how they’re maligned for the purpose of turning over quick revenue. And I think you mean to say that the end result should be aesthetically pleasing and sustainable housing that can be affordable. Beyond that, you’ve lost me.

At the day’s conclusion, the decision to implement sustainable practices is rewarded not just through acceptance, but upon the realization that the problem is solved or being solved. No matter how many adjectives and shades of green a proponent uses, the test of success is as important as the ideas themselves. The measure of success becomes as significant as the issue itself.

Dave de Sylva is a member of the Professional Engineers of Ontario, a graduate of the University of Toronto in Civil Engineering – 1973, and an owner of DelRidge Homes Limited, GreenLife Energy Inc., Kenborough Contracting and Leed Wall Building Systems. GreenLife Energy owns and operates on site solar and remote wind energy systems and research facilities in articulated solar and concentrated wind energy. Together with DelRidge they implement these ideas in the construction of net zero energy residential and office condominiums in the 4-6 storey category from 30,000 sf. to 225,000 sf. in size and trademarked as “GreenLife” buildings.