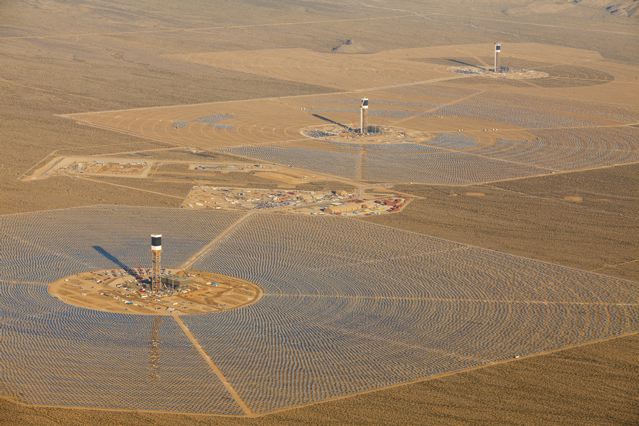 The Ivanpah Solar Electric Generating System (SEGS) – owned by NRG Energy, Google, and BrightSource Energy – will use BrightSource’s proven solar tower technology to produce clean, reliable solar electricity to more than 140,000 homes. Upon completion, at the end of 2013, Ivanpah will be the largest solar thermal power tower system in the world. Located in Ivanpah Dry Lake, California, the three-unit power system will be built on approximately 3,500 acres of public desert land.  Electricity from Ivanpah will avoid millions of tons of carbon dioxide and other air pollutants – the equivalent of taking 70,000 cars off the road. The project will create more than 2,100 jobs for construction workers and support staff and 86 jobs for operations and maintenance employees in addition to hundreds of millions of dollars in local and state taxes. The $2.2 billion project represents a durable model for far-reaching employment and economic benefit both locally and nationally.

The 377 megawatt net solar complex using mirrors to focus the power of the sun on solar receivers atop power towers, will reduce carbon dioxide (CO2) emissions by more than 400,000 tons per year. Ivanpah, which started construction in October 2010, is now near completion and has reached a milestone by creating its “first flux”. Solar flux is when a significant amount of sunlight is reflected off of the solar field mirrors.  The flux slowly heated the water inside the boiler to below the point of steam generation.