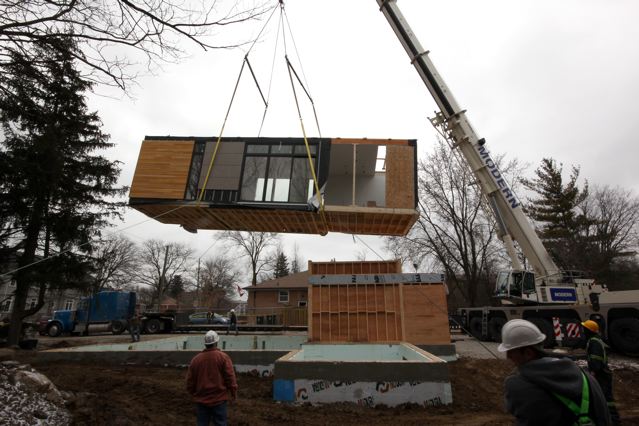 During winter on January 25, 2012, Nexterra Green Homes installed a house in North York, Ontario in just one afternoon and evening. That’s right, ‘installed’ rather than ‘built.’  It was a modular prefabricated home. The difference between this house in 2012 and prefabs installed during the past 50 years might be the price tag. This Ray Kappe design sells for about $1.7 million. Three more modular homes will be installed on the same site.

For pre-fabs to make a comeback and become the next big thing, you might think they would have to represent a less expensive way to build. In fact, despite the hefty asking price on this first Senlac Avenue home, it is competitive in its neighbourhood, and there are a lot of good reasons to look at factory built construction.

THE NEXT BIG THING?

“I don’t think in the future every house will be a pre-built modular,” says Nexterra’s Gary Lands, “But I think there will be more homes built this way and in particular there will be more modules used, perhaps in combination with site-building.”  He points out several advantages, such as total construction time, reduction of waste material and minimal weather damage during construction.

The house in question was installed in a single day, but of course total construction time is more like six months. It took only about 6 working days for a large team of factory tradesmen in Indiana to build the modules, but this could not begin until all materials and parts had been received at the plant. Ordering and receiving these was a two-month process. In addition, the building site had to be prepared, the basement built, and utility work completed. The difference is that this process could be undertaken simultaneously with the factory creation of the upper floor modules, rather than on the traditional linear construction timeline. You don’t wait for the basement to be complete before starting the upper levels. BUILT IN HALF THE TIME

In both cases, once the shell is in place, finishing begins and takes months. The first Senlac house will be shown for sale in early April, about 11 weeks after installation. Because the modules arrived with windows already installed and most of the external facing in place, this was faster than usual too. Not bad for a three-storey 2,130 square foot detached house with 10 foot ceilings, four bedrooms, 3.5 baths, finished 9 ft high basement, two-car garage, plus multi-level exterior decks.

“I think if it was not a modular home, this particular house would have taken about a year to build, or about twice as long,” says Lands, “This is significant if you think about the cost of capital.” “And there are other advantages.  In a climate controlled and quality controlled factory environment, there is less chance of human error caused by bitter cold, high winds or precipitation. Tradesmen are patient and precise. They usually live near the factory so there is reduced cost of travel and reduced worker stress. There is more control over design execution and the geometry of a box provides strength. The result should be a higher quality home. And it has to be solidly built because it is going to be transported by truck to the site, with the windows already in it.” The North York home travelled about 725 kilometres, then was lifted by cranes from flatbed trucks onto the foundation on-site. Modules were nudged into position with a backhoe.

As with any factory process, it gets more efficient over time. Waste material is more precisely calculated and avoided. Leftover material doesn’t sit in the mud for several weeks. The building itself is exposed to the elements for shorter periods and therefore sustains very little damage during construction that might haunt a builder later. And the neighbours complain less. The house is extremely energy efficient and Nexterra expects it will be LEED Gold, or possibly LEED Platinum. It will be heated and cooled using a geothermal system of three 300-foot deep wells. It features a white roof, which reduces energy consumption, and it was built to be solar-ready.

The factory-made envelope is super-insulated using soy-based polyurethane foam insulation. Energy Star® certified fiberglass windows and Energy Star® appliances have been installed. Plumbing fixtures are low-flow and much of the lighting is LED. LEED awards four points for off-site fabrication, and the plan scores high for environmentally preferable products and waste management.

One of the unique features of this long-life house design is a special rain screen system that permits rainwater to flow between exterior panels and the building wrap, allowing air flow between structure layers for effective drying. This means less rot over time because water penetration is minimized.

Not all projects are built on prime ravine lots with premium budgets, but if pre-fabs continue to make a comeback, housebuilding might be able to increase efficiency. Perhaps this will permit more designed-in green and long-life features; in other words home building the way we all know it should be.