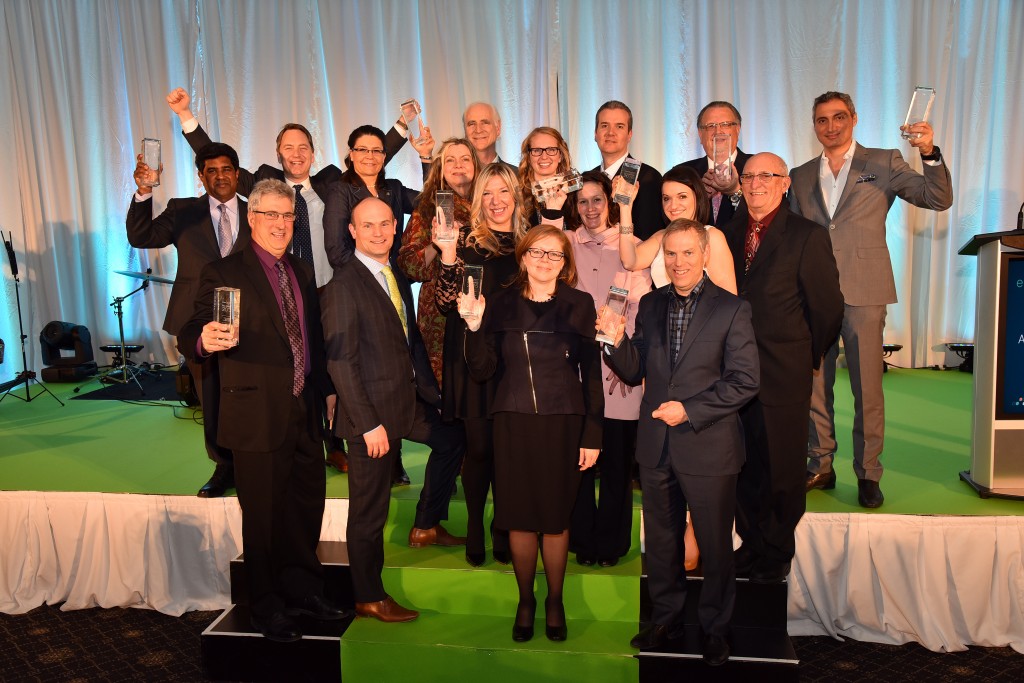 Net Zero and ENERGY STAR Qualified Homes in the Spotlight

EnerQuality announced the 2015 EnerQuality Award winners at a sold-out gala in Toronto. Each year the awards are presented to builders committed to building energy efficient and sustainable homes.

The ENERGY STAR® for New Homes Builder of the Year – Large Volume award was given to Mattamy Homes, Canada’s largest home builder, who earned the achievement for the third time. Mattamy Homes was one of the first builders to participate in the ENERGY STAR program, which has become the most successful green building program in Canada. Today, 32 per cent of all new homes built in Ontario are ENERGY STAR qualified.

The Minto Group was awarded Ontario Green Builder of the Year for a second year in a row. The award is presented annually to a builder that raises the bar for the rest of the industry through its leadership in improving the environmental, energy efficiency, and overall image of the industry.

Reid’s Heritage Homes took home the inaugural Net Zero Builder of the Year award. Net Zero homes are energy self-sufficient and are designed to produce at least as much power as they consume. Reid’s Heritage Homes was also the recipient of the Building Innovation – Low Rise award, and the Best Green Marketing Campaign of the Year, for their efforts to educate home buyers.

Tridel, the largest builder of condominiums in the Toronto area, was awarded the inaugural award for Building Innovation – Mid and High Rise. The award recognizes technical excellence in energy efficient and green building practices, which is key to achieving more sustainable communities.

Andy Goyda, Canadian Builder Lead and Market Development Manager for Owens Corning Canada was inducted into theEnerQuality Hall of Fame. The award is presented to an individual who, over the course of their career, has made a lasting impact on energy efficiency and green building in the housing industry. Mr. Goyda has been influential in the residential industry for 40 years, including his pioneering support of ENERGY STAR for New Homes and Net Zero. His leadership has helped Ontario’s home building industry become the most energy efficient in Canada.

Sonja Winkelmann, Director of Net Zero Energy Housing for the Canadian Home Builders’ Association was recognized as EQ Leader of the Year.

“Ontario’s homebuilding industry has a commendable track record of creativity and innovation,” said Corey McBurney, President of EnerQuality, “ENERGY STAR for New Homes is a success story that all Ontarians should be proud of, proving that voluntary, builder-led initiatives work.”

The awards show followed the EnerQuality Housing Innovation Forum, where a sold out audience discussed the future of green building in Ontario. In the closing keynote conversation, Dr. Dianne Saxe, Environmental Commissioner of Ontario, and Mr. Peter Gilgan, Founder and CEO of Mattamy Homes and member of Ontario’s Climate Action Group, discussed the future of homebuilding in light of Ontario’s new Climate Change Strategy.

Also returning to the forum this year was the Innovation Gauntlet – a Dragon’s Den-style competition where industry manufacturers and organizations pitched their smartest, most innovative products and services to a panel of judges. The Innovation Gauntlet winner is chosen live by the audience. This year’s Innovation Gauntlet award was presented to LiteBuilt for their concrete “LITEBOK” building system – an environmentally friendly, interlocking building block that is ideal for taller buildings.