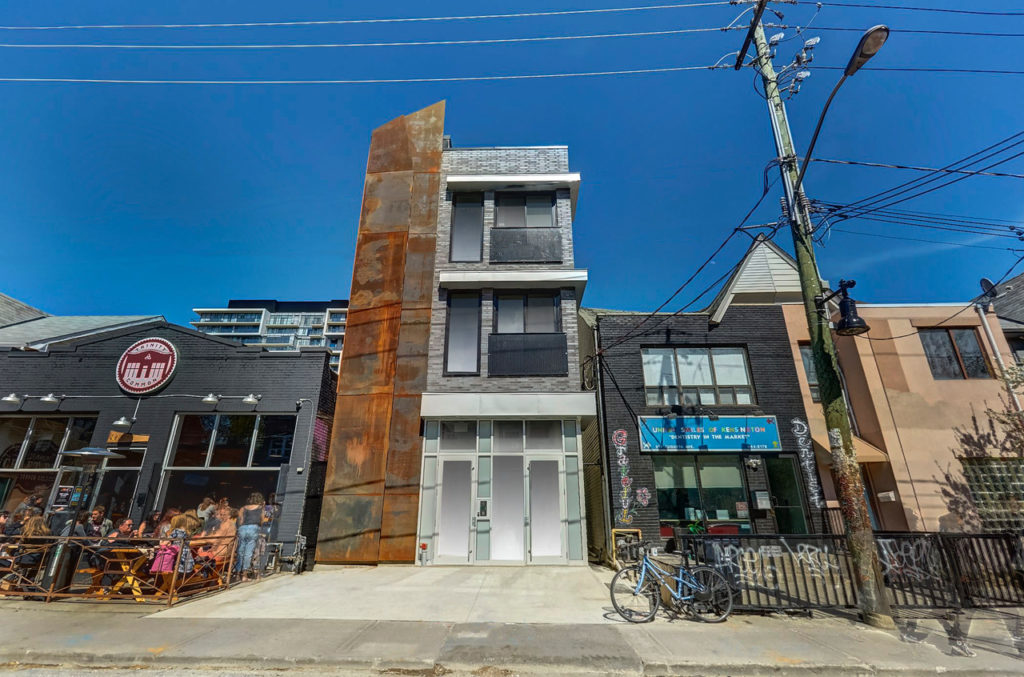 This is a story behind the story about the metamorphosis of a century-old property in Toronto’s Kensington Market district.

Their task? To perform a wholesale makeover of a mixed-use building – with a storied history to say the least – owned by John McBride.

“One of the more interesting challenges,” says Sa’d, OAA, Principal, Paradigm Architecture + Design, “was that the building is located on a very compact, restrictive site, with a proximity to neighbours that required us to prescribe several innovative envelope solutions in order to be able to comply with fire-resistance requirements set out in the building code.”

Keep in mind that architectural considerations always factored in the core wishes of the owner – to create a new landmark building for a neighbourhood that is undergoing significant change, albeit at a much slower, more selective pace, than the rest of Toronto. As the process evolved, the site underwent a gradual transformation. Today, it’s a three-storey, mixed-use building consisting of a new home for the Kensington Brewing Company on the ground floor, a commercial office space on the second, and four executive rental micro-apartments on the third. “Looking back on our first meeting, over six years ago, sitting there in the Barbini office, it’s really hard to believe what you see today,” added Abbey, Principal, Licensed Technologist, OAA. M.A.A.T.O. BSSO. A Sc.T. CSC. BCQ with Adtek Building Consultants. “The Kensington, 299/301 Augusta Avenue, has completely transformed the neighbourhood over that period of time.”

Back in 2011, it was Abbey and Adtek who got things going. Later, Sa’d and his Paradigm team were brought into the mix; fortuitously, as it happened. More on that later.

“I realized early on that it would take a lot of ingenuity and creativity to come up with any kind of concept that would be both aesthetically pleasing and financially feasible as well as sustainable, accessible and energy efficient,” Abbey says.

“I came up with the idea of creating a three-storey mixed-use building that would contain retail or restaurant space on the main floor, flexible commercial space on the second floor and luxury residential units on the third floor. We all agreed that this concept, in principal, would be an ideal attribute to the Kensington Market community.” What followed was the hard part – making the concept work within a long and narrow lot, and treating the project as a renovation, not a new build, which meant maintaining 50 per cent of the main walls in the existing building.
Abbey says he wanted to come up with a pleasing design, but also wanted to have as much flexibility as possible to allow for any future change of use.

“So I chose to design it as a fully sprinklered, non-combustible construction building, even though it was, technically a ‘small building’ regulated under the Ontario Building Code (OBC),” he explained, “being less than 600m2 in gross building area and no more than three storeys in building height.”

It was at this stage of the project that Abbey says he was “thrown a curve.” “This happens in all designs, but in this case the owner wanted to add an additional seven feet at the rear of the building to gain more space,” Abbey recalls. “ We pushed the building over the limit of 600m2 and it then was considered a ‘large building’ and subject to different regulations.”

When all was said and done, and the building permit process completed and approved, it was time for Abbey to turn over the architectural design duties to Sa’d and Paradigm.

“Although I was pleased and excited to have been instrumental in the conceptual design, the design development, the construction drawings and the building permit process, I was really upset that being only an accredited architectural technologist that I had to hand over the reins to a licensed architect of record because of the building’s new classification,” says Abbey.

“Notwithstanding that hurdle, I have to say that Jim Sa’d and his team from Paradigm Architecture have done a magnificent job and I am really proud to have been part of the project.”

With Sa’d and Paradigm at the helm, the reno continued. The building has a façade composed of materials, Sa’d says, that suggest a dichotomy reflective of the struggle between Kensington Market’s past and future, all within a relatively narrow lot frontage. “Two thirds of the façade consists of contemporary, purple-black, high-iron content brick accented with crisp, clear anodized aluminum awnings above each storey,” he explains. “While the last third harkens back to the gritty and organic history of the Market by virtue of a sculptural, Cor-Ten steel-clad elevator shaft with backlit perforated letters that spell out the Market’s namesake, all the while creating a subtle beacon, now recognizable to visitors and residents of the neighbourhood alike.

“Perforated black steel guardrails on the second and third floor Juliette balconies echo this language of raw materials that are found on various buildings nearby.” Sa’d says the apartments were designed with many space-saving solutions, including Murphy bed units that collapse atop couches, instantly transforming living rooms into bedrooms, and kitchens packed with highly organizational cabinetry and concealed appliances, such as an under-sink dishwasher drawer. Alternate lighting options and high, coved ceilings add to the illusion of larger suites, each of which contains its own washer/dryer.

Yes, there were architectural hurdles, but they were circumvented. And that’s one of the trademarks of the Barbini Corporation brand.

Barbini Corporation is a leader in green building. Architect James L. Sa’d of Paradigm Architecture + Design says a number of sustainable features were incorporated into the project at 299/301 Augusta Avenue. “Mineral wool insulation with R-values above minimum code standards were employed in order to reduce energy consumption costs for heating/cooling; daylight tubes were installed in order to reduce the amount of artificial lighting required during daytime hours; a greywater recycling system was employed that reused rainwater collected and stored in retention tanks in the basement for toilet flushing within the third-storey rental apartments. Generally, materials, finishes and energy efficient technologies were incorporated into the design and construction of the building.”