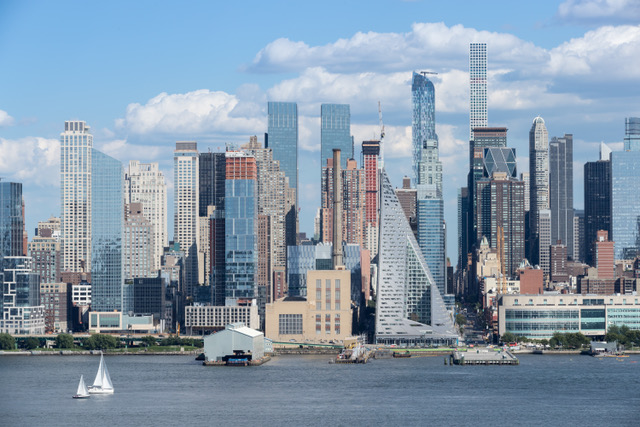 Visionary pyramid-shaped highrise in Manhattan turning heads around the world

With an eye focused squarely on the future, Danish architecture firm Bjarke Ingels Group (BIG) is turning heads around the world with its visionary pyramid-shaped highrise called VIA 57 West.

Located in New York City’s Manhattan district alongside the Hudson River, VIA 57 West completely transforms the area known as Hell’s Kitchen. The resulting building stands out as a modern structure incorporating the density and views of a traditional highrise with the communal mindset of a European courtyard. The winner of a number of architectural design awards already, it’s believed the ground-breaking concept will serve as inspiration to builders in the future.

Before BIG’s architects performed their magic, the site very much lived up to its Hell’s Kitchen monicker. There was an electricity plant to the north, to the south the abhorrent racket and odor of a waste-sorting centre, a multiple-lane roadway blocking off the Hudson River, and a conventional residential tower to the east. But then BIG came up with the idea to create a hybrid of a European perimeter development and a U.S. highrise, dubbed a courtscraper. With VIA 57 West, a green interior courtyard serves as the focal point. Balconies jutting out from the roof allow unfettered views of the Hudson River; moreover, nearly all of the 709 apartments overlook the river and evening sunsets, which would not have been possible had the design been a traditional one. And the pièce de résistance: Not only does the tower rise 35 storeys, but the southbound highway which drivers use to enter the city now takes them right to the front of the building, which ends up acting as an unofficial gateway to Manhattan. Included among the many inventive features are angular balconies which swirl around the integrated green plaza below. The block connects with the waterfront and has been designed to minimize traffic noise. So there’s a quiet, sheltered ‘oasis’ feel to the development, a respite from the loud cityscape close by. The “oasis’ courtyard features 80 newly planted trees and lawns, and 47 species of native plant material. By keeping three corners of the block low and lifting the northeast portion of the building, the courtyard opens views towards the river. While the courtyard is a private space and a sanctuary for residents, it can still be seen from the outside, creating a visual connection to the greenery of the Hudson River Park. Although the building consists mostly of residential units, there are other spaces of different sizes with cultural and commercial programs at the street level and on the second floor. And the lower levels have a strong connection to the courtyard.

The lobby is joined to the courtyard via a grand staircase. In that area, amenities include lounges and events spaces, a golf simulator, movie screening room, a pool, a basketball court, gym and exercise studios, and game rooms for poker, ping pong, billiards and shuffleboard. At the upper levels, the apartments are organized on a fishbone layout, orienting the homes towards the view of the river. Terraces have been placed in the warped façade to maximize views and light into the apartments, while ensuring privacy between residents.

VIA 57 WEST redefines green living with a vision of sustainability that both respects the natural world and promotes your well-being. VIA 57 WEST sets a new paradigm for environmental responsibility. Centered around the four core elements— Water, Air, Earth and Energy— VIA 57 WEST gives back to the environment and provides a home where people not only live well but thrive. An integral part of the VIA 57 WEST DNA, sustainability has been woven throughout the building and each of its residences.

WATER – Water conservation and improved quality is a mandate of the block’s building system. Acclaim for VIA 57 West: The most recent architectural honour for tall buildings – the 2016 International Highrise Award presented by Deutsches Architekturmuseum (DAM) – goes to projects that best exemplify the criteria of future-oriented design, functionality, innovative building technology, integration into urban development schemes, sustainability, and cost-effectiveness. Earlier, The Council on Tall Buildings and Urban Habitat (CTBUH) named VIA 57 West the Best Tall Building in the Americas as part of its 2016 Tall Buildings Award.