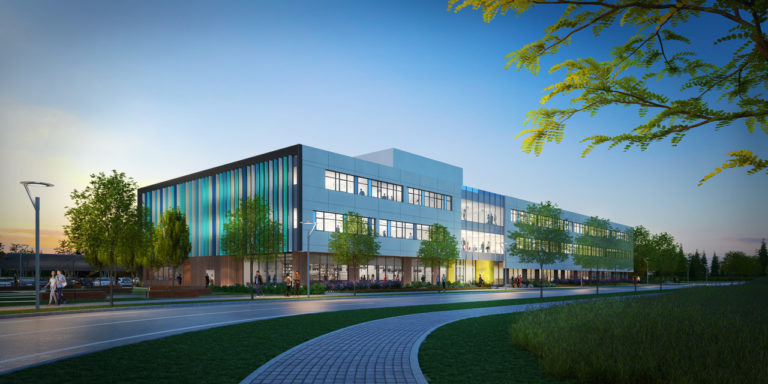 Due to be completed Summer 2018, the vision for this three-storey, 110,000 sq.ft. commercial multi-tenant office building is the realization of a collaboration between the Cora Group, Sustainable Waterloo Region, the David Johnston Research + Technology Park and anchor tenant EY. It is one of 16 participants in CaGBC’s Zero Carbon Building Pilot Program.

evolv1 received its ZCB-Design certification in April 2018. CaGBC spoke with Adrian Conrad, Chief Operating Officer of the Cora Group, about the vision for the project and how this landmark achievement as part of the Zero Carbon Building program is making a real difference in shaping a sustainable future.

A new benchmark for sustainable design

“Our original vision was to design and build a building that was net positive energy at similar costs to conventional construction – and we were determined to prove it was possible,” said Conrad. With this goal in mind, evolv1’s project team – including Stantec, which designed the building, and construction firm Melloul-Blamey – employed a highly integrated design process that incorporates both active and passive systems to optimize value against construction cost. The building’s design includes elements aimed not only at maximizing its energy efficiency, but at producing more energy than it consumes:

Once complete, the building’s performance will be measured over its first 12 months of operation in order to demonstrate achievement of a zero emissions balance, which would allow it to earn a Zero Carbon Building – Performance certification.

In addition, evolv1 is targeting LEED Platinum certification, further positioning the building at the leading edge. “We are excited to be setting this new benchmark within the design and construction industry,” Conrad added. An eye on the future of green building

For the Cora Group, the pursuit of a ZCB-Design certification for evolv1 represents both an investment in a greener future and an opportunity to underscore the company’s history as a sustainable builder for more than a decade.

“First and foremost, we want to make a difference,” Conrad said. “When we heard about the CaGBC Zero Carbon Building certification, we saw a tremendous opportunity to measure our efforts against a progressive new building standard and to pilot our project within a program that is capturing attention from across the country and indeed, around the world.”

He noted that the Cora Group’s participation in the Zero Carbon Building Pilot Program has enabled the project team to learn from others who share their vision and philosophy, as well as to contribute to broader industry knowledge about low-carbon construction.

And with its location within Waterloo’s Idea Quarter, on the doorstep of the soon-to-be-completed ION Light Rail Transit system, evolv1 is gearing up to be a hub for next-generation innovation and the millennial workforce.

The hope, Conrad said, is that the building’s ZCB-Design certification will be an important seal of approval, signalling to premier tenants that the Cora Group is a leading provider of high-quality, sustainable, green spaces, and ultimately changing the way procurement is done.

“We envision a day where zero carbon building design will be on the top of a tenant’s wish list when searching for office space,” he said. Given the fact that the evolv1 project team is essentially breaking new ground with the Zero Carbon Building Program, a critical piece of the puzzle has been the utilization of the integrated design process to ensure alignment among everyone involved, from the building owner, to the architectural and engineering teams and sustainability consultants, to the contractor and sub-trades.

“Probably the biggest piece of advice we can offer is to get everyone on the same page from the very beginning,” he said, adding that the project has been a true team effort. “In the early days of the project, there was a lot of consensus-building among the parties involved to ensure our vision was properly communicated and shared.”

This shared vision has also been helpful in navigating the uncertainty of working with governments, utilities and the associated red tape to figure out the details of a new initiative. Adhering to zero carbon principles requires an additional level of attention to detail at every step of the design and construction process, making it even more important to have all hands on deck, Conrad noted.

evolv1’s ZCB-Design certification through the CaGBC is a third-party validation of the Cora Group’s belief that it is financially possible to build within a conventional business model while using low-carbon building strategies with minimal impact on the environment, Conrad said.

“We all knew it was possible, but we’ve now proven it is absolutely, financially possible to build a Zero Carbon commercial building, and to do it solely through private capital funding,” he said. “The Cora Group is exceedingly proud to be recognized by CaGBC and to have evolv1 become the first project in Canada of its kind to be Zero Carbon Building – Design certified.”