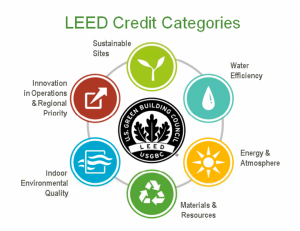 This time around, below, we are reprinting an article courtesy of China-based Bisagni Environmental Enterprise (BEE), dealing with the subject of whether LEED leads to better energy performance.

We find BEE’s article about the findings from an organization calling itself Environmental Policy Alliance (EPA) to be very intriguing.  The tagline for the EPA website? LEED Exposed.

The organization claims to reveal the truth about LEED – the building performance rating system developed by the U.S. Green Building Council – as something that is “wasting taxpayer money to fund not-so-green buildings.”

Coincidentally, the Ohio state senate recently passed a resolution that would ban state agencies and entities from using LEED v.4 as a building performance rating system. Critics of the bill say that it serves special interests, specifically plastics and chemical companies

Who to believe? What’s your opinion? Please e-mail your comments to publisher@gbplusamag.com and we’ll publish them in our next issue.

The free-market group Environmental Policy Alliance (EPA) released some very unsettling findings regarding LEED: that the supposedly green buildings with LEED certification in Washington D.C. actually use more energy than those buildings that aren’t LEED-certified at all.

According to the group, even the Washington headquarters of the USGBC, with its platinum LEED certification, scores 236 EUI (energy use intensity), compared to the average 199 EUI for non-LEED certified buildings in the capital.  A difference of 37 EUI isn’t so big, but every watt counts when one is aiming for energy efficiency.

If you ask physics professor John Scofield who runs ThePragmaticSteward blog though, analysis of energy use between one group of building and another is hard to do correctly and objectively, especially if the measurers are people “who begin the study with a stake in the outcome—either those promoting LEED or those ‘dug against it’.”

Which leads us to ask what the Environmental Policy Alliance has at stake in their report.

We checked out their website, which looks pretty legit, but their LEED Exposed section is somewhat suspect—the page branches out into “evidence“ links as to why LEED is a waste of tax-payers money.  A quick read of the articles inside points out the various criticisms that have been hurled at LEED time and again.  LEED isn’t open for commenting from the general public, the science behind LEED is questionable, LEED .favors only one timber source, among other things.  Some of the concerns might be valid, some obviously made out of spite.

When a website however devotes all its energy to discredit LEED without so much as giving the other side of the story—what makes LEED effective, for instance—all their efforts appear tainted with a dark cloud of hatred and malice.

Shill group or not, Environmental Policy Alliance raises a few valid issues about LEED’s shortcoming as a green building certification that’s worth discussing.

In particular, LEED’s weighted point-based system makes it easy for builders to pick and choose the easiest and most feasible points first, thereby securing for the project a respectable score.  No doubt, this bonus point-hunting dilutes green building’s honest intentions, burying it in a flurry of metrics and technical specs.  The builder gets busy on metrics, instead of ascertaining if those metrics actually translate into good building’s performance in real life

As an example, the Living Building Challenge—an alternative to LEED, requires a full year of operation before verifying its energy and water performance, which is a pretty straightforward and sensible approach.  In fairness to LEED 2009, its Minimum Program Requirement (MPR #6) gives owners the option to commit to sharing whole-building energy and water consumption data for up to five years beginning occupancy, although that too is a bit lax.  Since it is just an option, owners can opt out if installing such meters is cost-prohibitive or impractical to install.

MPR 6 Option 2 invites projects to demonstrate their commitment to high performance operations by pursuing LEED for Existing Buildings: O&M certification within two (2) years of accepting their design and construction certification. Although projects pursuing LEED EB: O&M are not required to complete the 5-year reporting period before achieving existing building certification, they will have to re-commit to MPR 6 for another 5 year period (or until their LEED EB:O&M recertification) when registering for LEED EB: O&M. (Bold letters ours.)

Even the USGBC itself is accused of cherry-picking LEED energy data, since it only provides information for 450 out of the 1,861 buildings it has gathered data from.  That only amounts to 24%, hardly reliable to get any definitive answer about the performance of buildings with LEED certification.

We honestly want the best out of LEED and we’re glad LEED v4 is currently addressing that laxness in 2009.  Because if it doesn’t, LEED risks becoming just a glorified brand, something builders use to attach to their project to garner prestige.  LEED has to be more than just beautiful in theory and on paper.