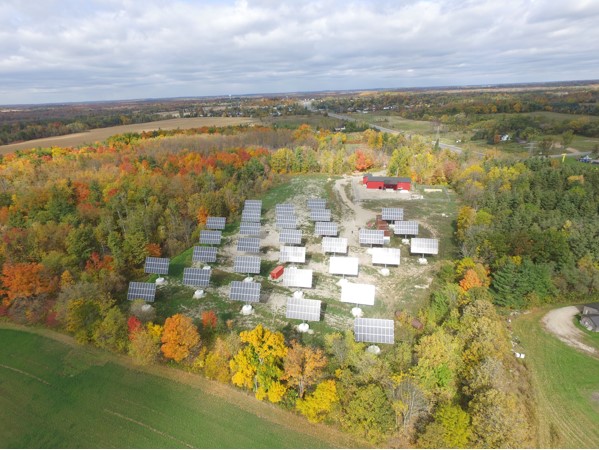 The concept makes perfect sense to Bill Panagiotakopoulos and the Owner/CEO of Cardinal Group Inc. aims to share his vision with the world.

He knows that over the past decade the solar energy industry has been growing exponentially, gaining in popularity along the way. He realizes that thousands of projects, both residential and commercial, have been popping up globally, putting a spotlight on a once-novel technology.

But he has also noticed that, lately, while the commercial solar sector is growing, the social consciousness seems to be lessening. And he says that people are becoming conflicted each time they see another green space, like a farm or field, covered in solar panels.

“It’s challenging people’s notions about how environmentally-friendly solar energy really is,” he says.

But Panagiotakopoulos believes he has the perfect answer for those concerned about solar. And he’s tackled a project that more than supports his claim. The concept involved transforming a brownfield property with a poor environmental record into a renewable energy centre, while maintaining its commercial use as a recycling centre. “The installation is the largest elevated solar tracking system on an industrial brownfield in Canada,” he says. “We show that it is possible to generate a second source of revenue from the same piece of land.

“Although there are larger solar installations on fields, farms and other green spaces, this is the largest to be placed on an operating industrial property.”

His interpretation of the Ontario Power Authority’s Feed-In Tariff (FIT) program is that solar farms should be put on brownfields and industrial parks. He’d like to see others follow suit, with similar installations done rather than covering green land and limited its use to solar power generation, and solar power generation only.

“People in our industry and those outside it both seem awestruck when they see that it’s possible to have two very different commercial operations on one property,” he says. “But they can.”

The design and technical specifications of Cardinal Group’s solar installation – located off Highway 6 in the Township of Flamborough in Hamilton Ontario – is unique in that it occupies a position on the industrial property that was not used previously. Utilizing the Sonnen Tracking Systems, the solar panels move, guaranteeing the maximum, most-efficient power generation. The dual-axis photovoltaic tracking systems align the solar panels to the optimum angle to the sun for power generation. This process allows the energy usually generated using static photovoltaic panels to be increased by as much as 45 per cent.

“Those kinds of locations are heavy consumers of electric power and thus should be encouraged to generate what they can right on the properties,” he says. “Putting this style of solar installation there reduces the demand on the grid and, consequently, makes the most efficient use of the FIT electrical generation. His goal for this type of photovoltaic installation is for it to be recognized across Ontario, Canada and the world, so that others can understand the benefits of solar energy on their commercial/industrial properties.

He understands that this model is more costly, but strongly believes that the benefits and increased production of the Sonnen System Trackers far outweigh the extra expenditures.

“The project has already doubled the productivity of the property.”