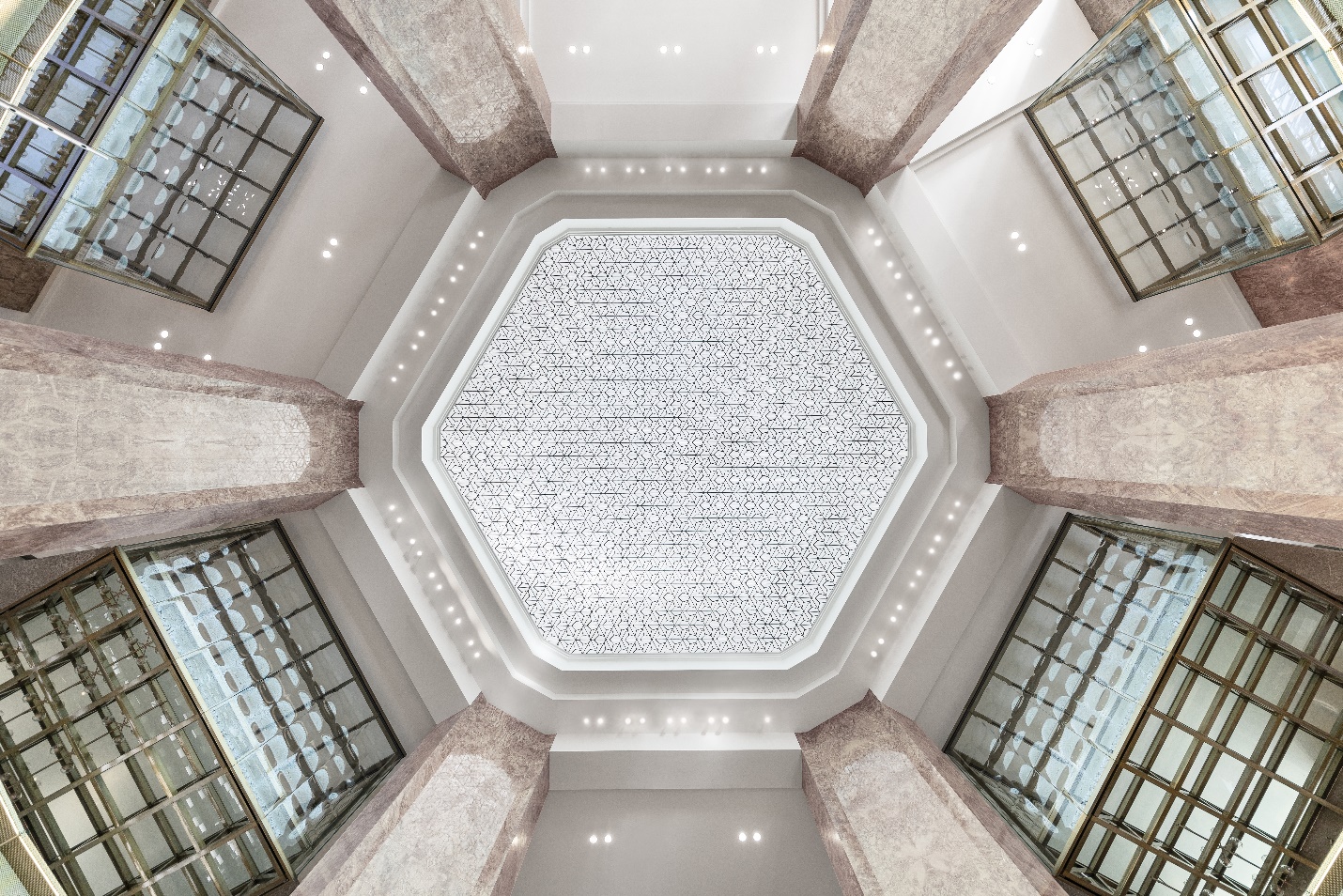 The 6,800m2 Galeries Lafayette concept store officially opened its doors to the public this spring, welcoming local and global shoppers into the restored Art Deco gem. The generous four-story environment is the largest store on the famed Parisian boulevard, and combines old world elegance with modern chic for hosting established and emerging brands, experiences and events. The 120-year old heritage brand Galeries Lafayette Group brought BIG on board following an international architectural competition in 2016. 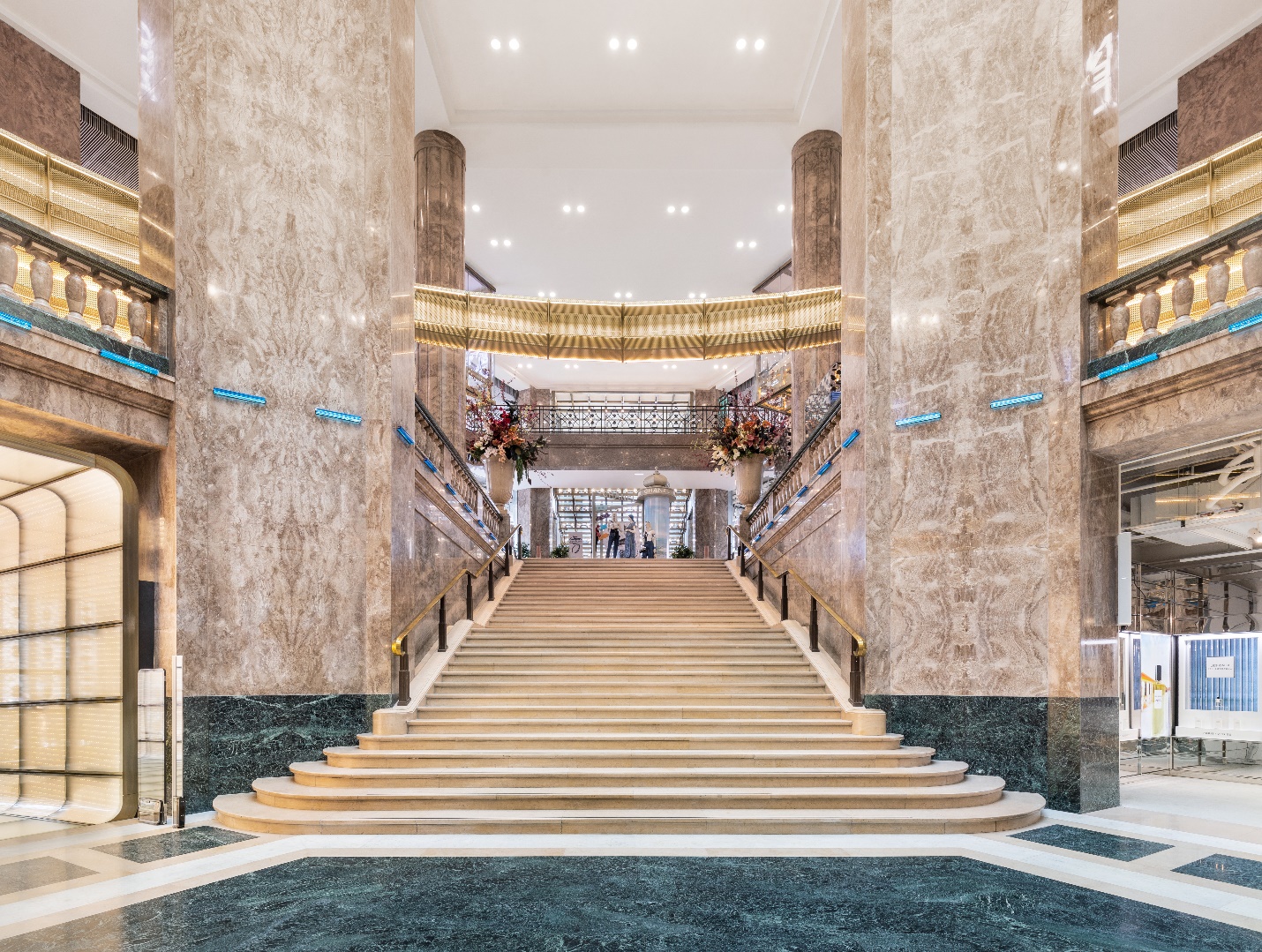 Image by Delfino Sisto Legnani and Marco Cappelletti
“At Galeries Lafayette, we usually say that the future begins in the past. By opening on the Champs-Élysées, our Group is not only writing a new chapter in its entrepreneurial and family history, it is also fulfilling its founder’s dream. A dream expressed nearly 100 years ago on the corner of the “Champs” and rue La Boetie, where in 1927 Theophile Bader planned to build a venue offering something midway between retail, services and entertainment,” said Philippe Houze, Executive Chairman of the Galeries Lafayette Group. “Today, almost 90 years later, we are delighted to pursue his grand design with a store concept that is both historic and disruptive, and which by combining two iconic brands ‘Galeries Lafayette’ and ‘Champs-Élysées, will also help promote a certain French Art de Vivre and contribute to the revival of this world-famous avenue.”

BIG’s design pays tribute to the tactility and texture of the historical building. Throughout the store, visitors encounter precious materials and refined details from the past that are reinterpreted and deployed in a contemporary way. Walking around the lofty gallery-like space is an experience in moving through a composition of architectural elements that operate at the scale of furniture and defined in experiential shopping zones. “Working with a family and a company that can look back 100 years gives you – not only the possibility – but actually the responsibility to attempt to look as far ahead as you can look back. With the advent and omnipresence of online retail, the urban department store’s role and relevance must be renewed as the urban agora. We humans are social beings – and more than ever do we need a forum for collective intimacy – where we can’t just get what we want by clicking on it – but where we can engage with others in urban environments that are visually and physically stimulating to all the senses,” said Bjarke Ingels, Founder & Creative Director at BIG. 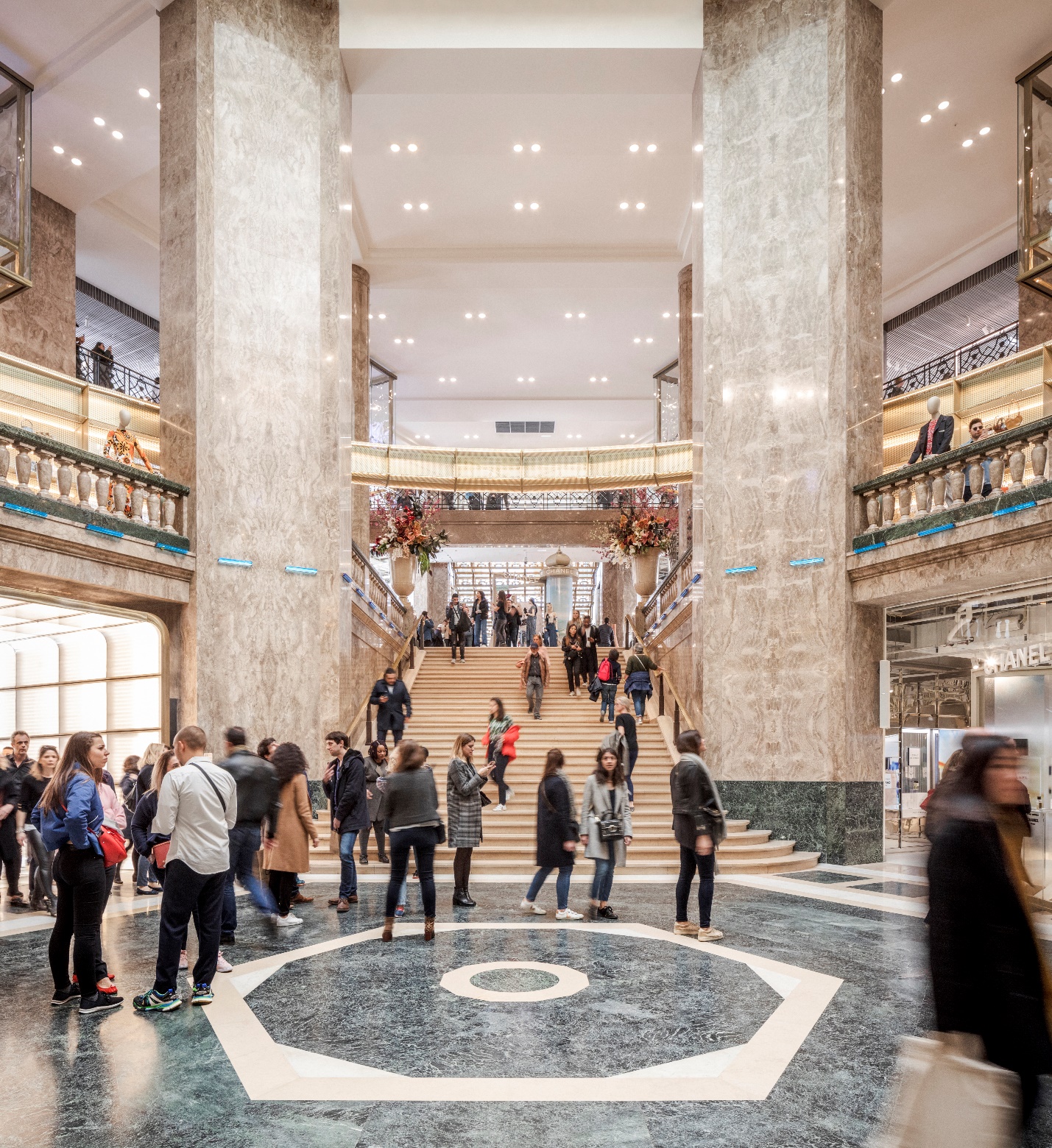 Image by Michel Florent Shoppers are invited into the building through an inverse canopy on the street level. A glowing bridge ushers life into the heart of the building: a dramatic circular atrium covered by a monumental glass cupola that has been restored and uncovered for maximum daylight. The entire store unfolds on the ground floor and creates a bright new urban living room for brand activations, fashion shows and other special events. A grand staircase, which doubles as an auditorium during events, takes visitors to the mixed-use space on the first floor occupied by creative and emerging brands, as well as a denim lab, jewelry display, limited edition sneakers and tech products. A continuous golden ring of perforated metal wraps around the columns and creates a series of rooms and alcoves facing the atrium. 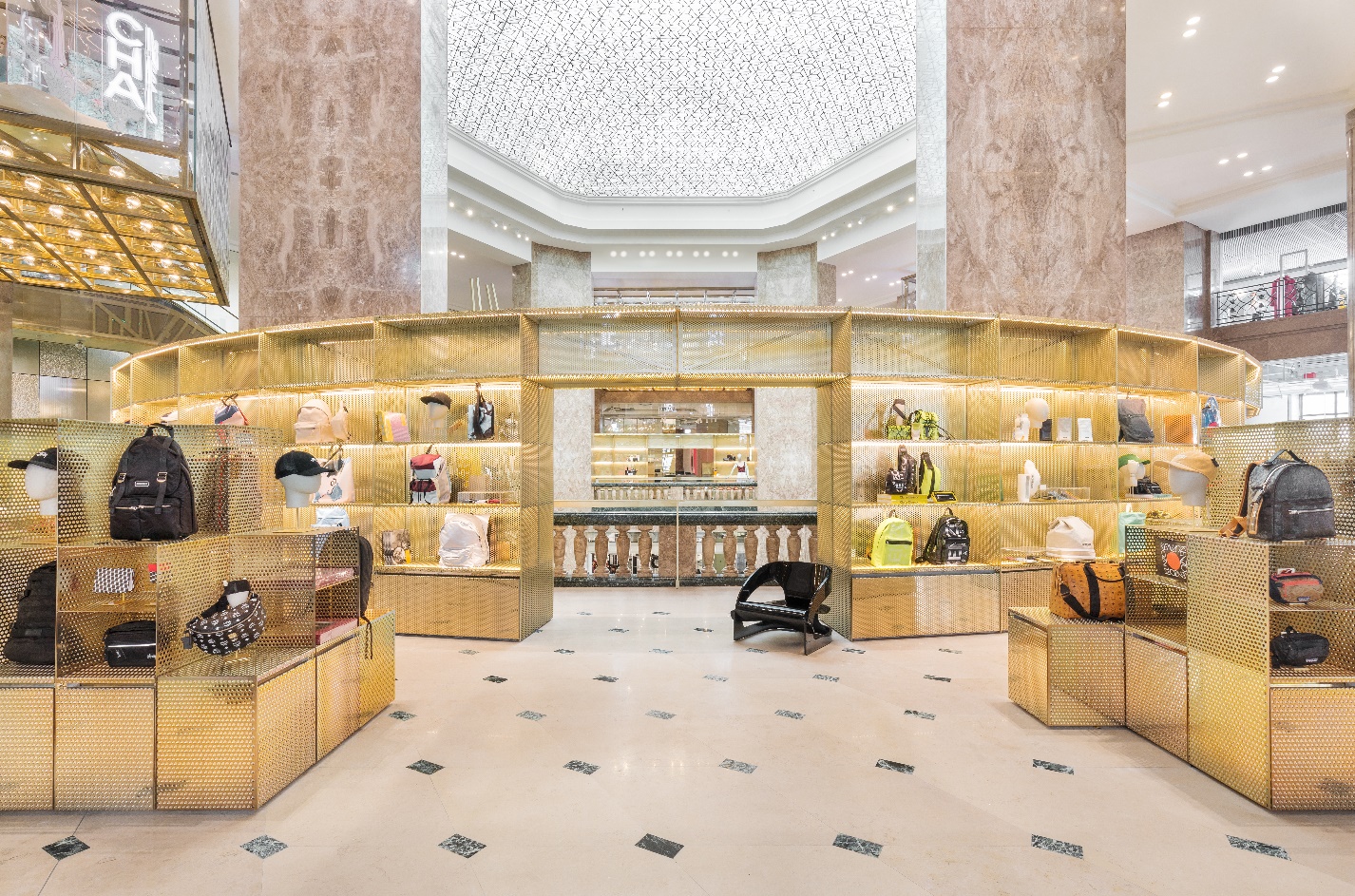 Image by Delfino Sisto Legnani and Marco Cappelletti “To create an invitation to enter, ascend and explore, we have designed a handful of elements that find themselves at the intersection of architecture and furniture. Rather than messing with the old bones of the building or delineating function with walls – the program has been provided with a family of pavilions that may change and transform over time. The raw space has an almost urban scale and character that makes it capable of accommodating even the wildest interventions, which makes me excited to imagine what I might expect to find here next time I come back. And it shows me that Galleries Lafayette is not only opening a new department store on Champs-Élysées, rather, they have opened up a new urban room for the Parisians,” continued Bjarke Ingels. 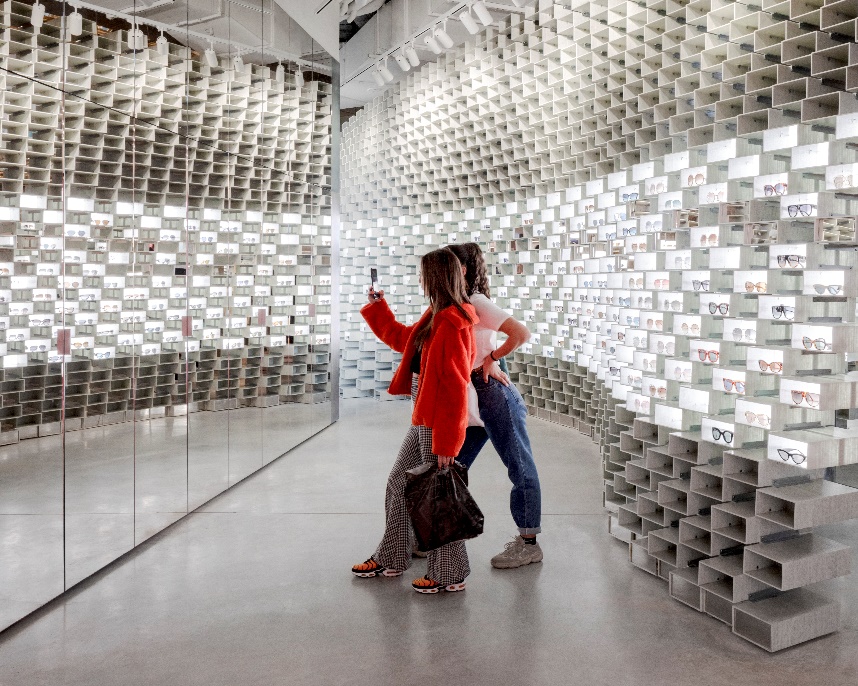 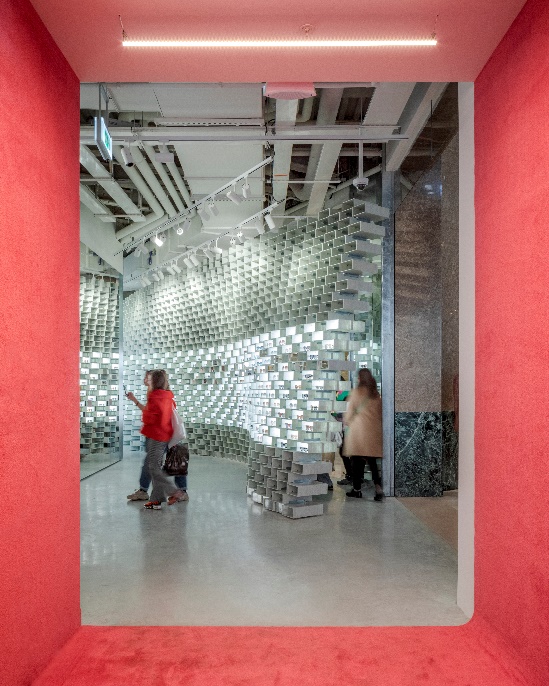 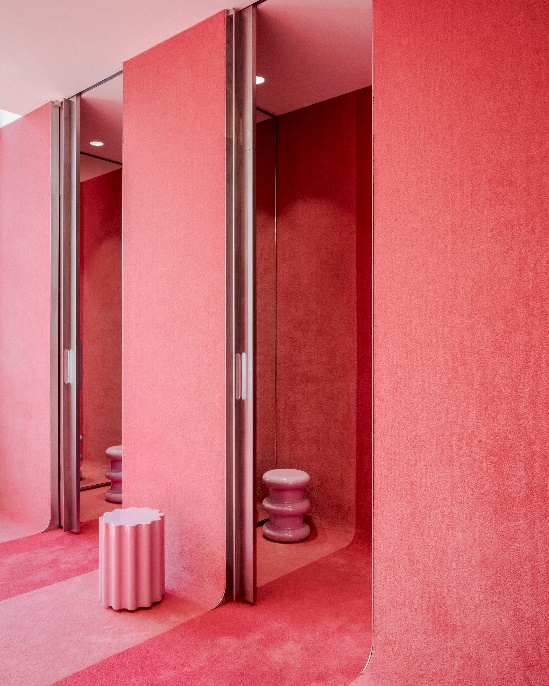 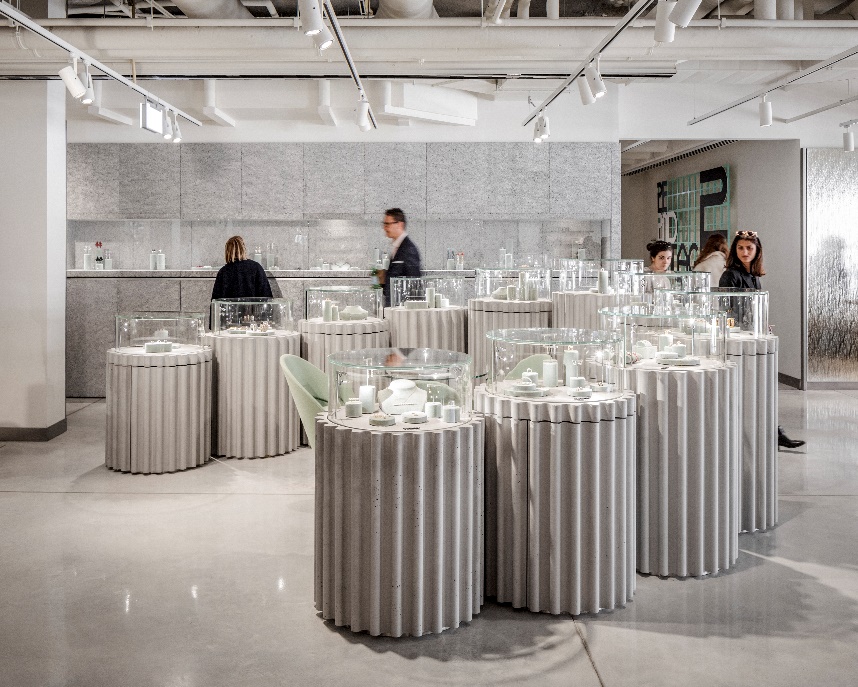 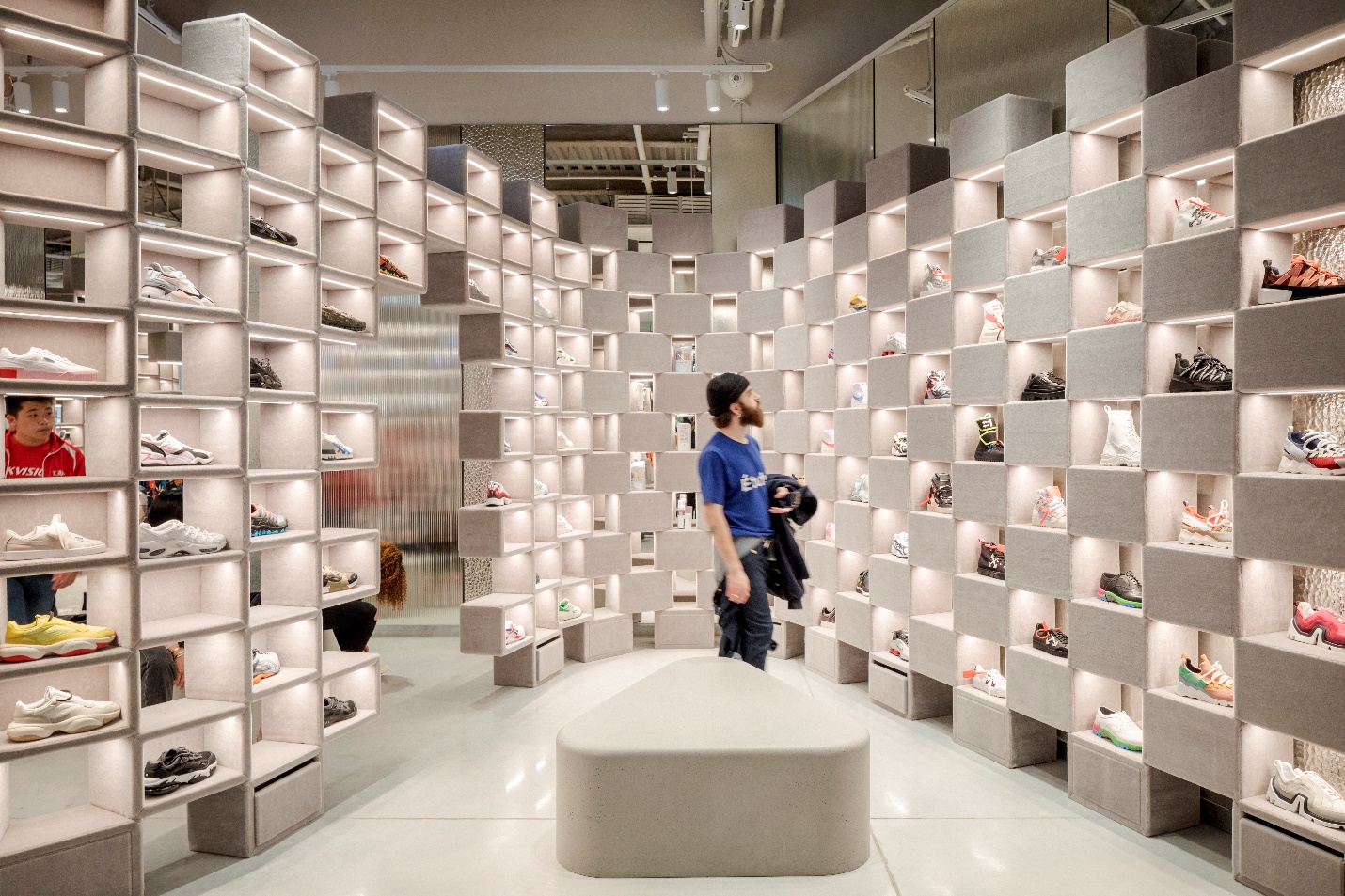 Images by Michel Florent From the ground floor, visitors are immediately able to see the upper levels, enticing them to explore the different destinations and activities. The escalators are finished in warm metal and a ribbon of glass from the same material palette as the central atrium. Exploring the store and its different levels is a discovery of carefully curated environments where furniture is never only storage: interweaving carpets become dressing rooms, countertops are a sculptural stack of elements, and magic carpets for the shoe display double as furniture for shoppers to sit and try the footwear. 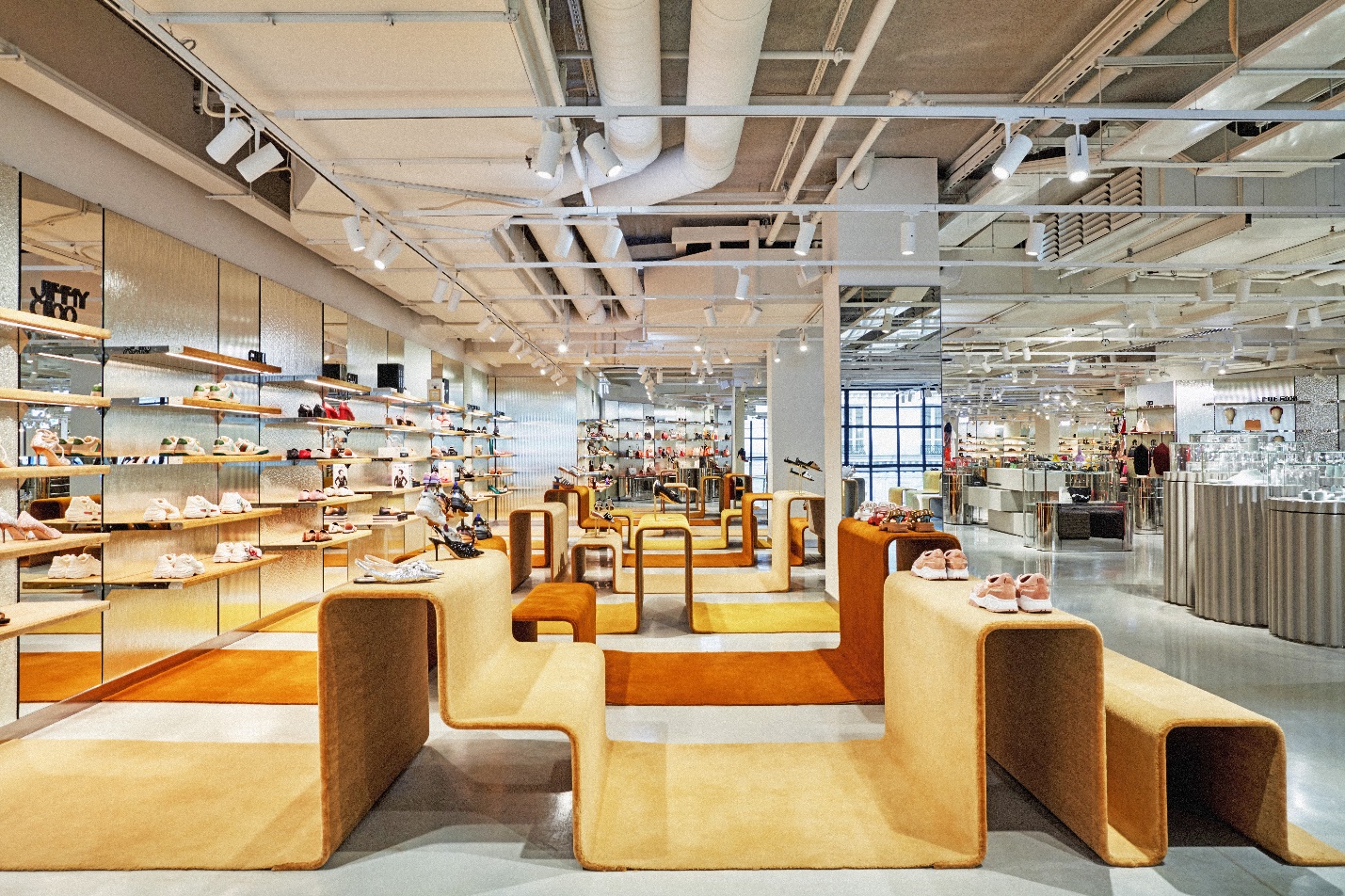 Image by Matthieu Salvaing “When we inherited this incredible space from 1932, most of the beautiful materials and Art Deco elements were covered with black painted drywall, the skylight was blinded by sheetrock and the connections to the outside had disappeared. We focused on the heart of the building and preserved all of its precious materials and refined details, wrapping them in gallery-like spaces. The historical architecture is supplemented by the raw qualities of ceiling heights and abundance of daylight,” said Jakob Sand, Partner at BIG. 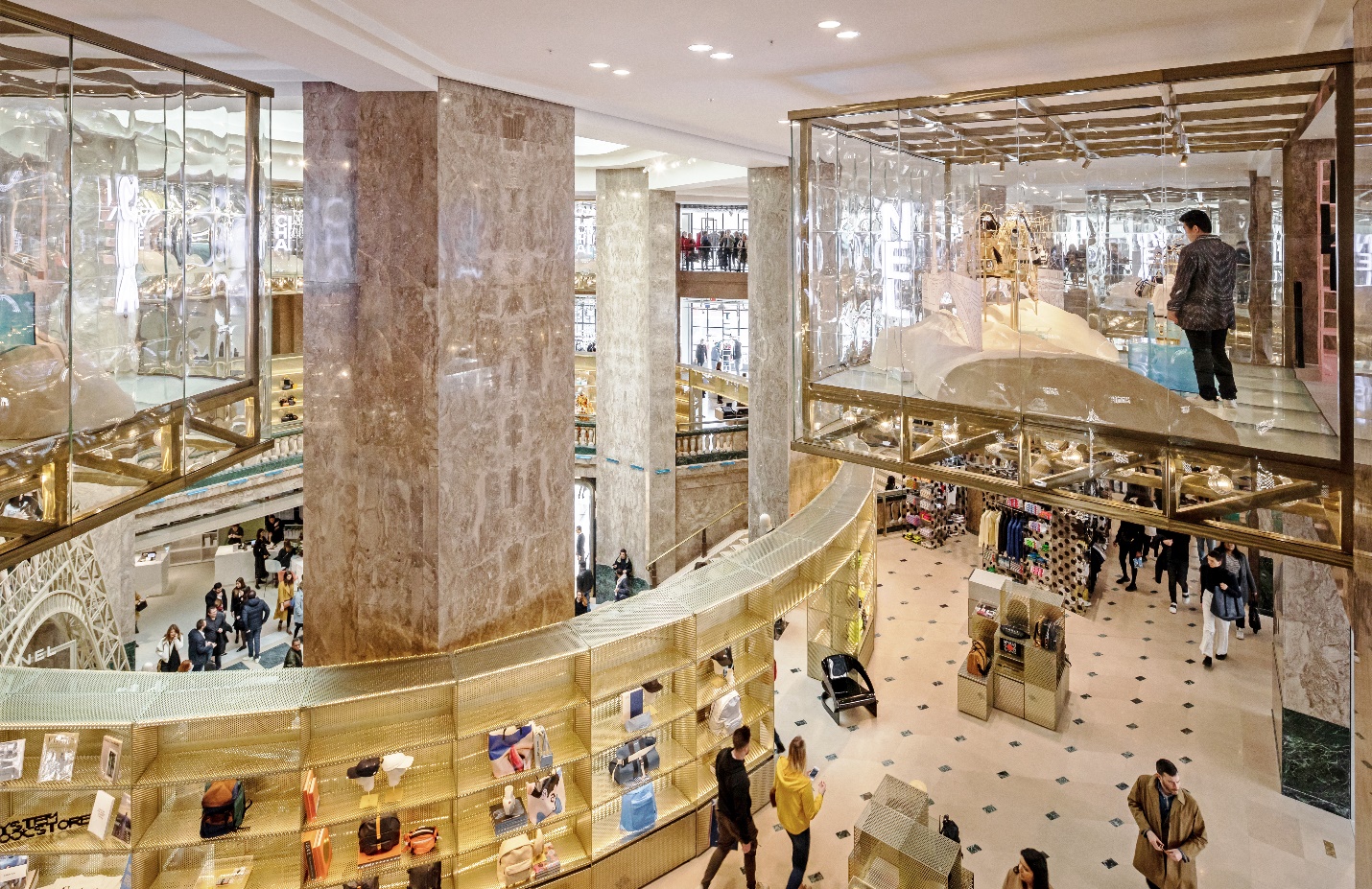 Image by Salem Mostefaoui The upper levels of the store are further refined and continue the idea of furniture as artifact. The top floor features a series of suspended glass vitrines that resemble independent objects and can host a variety of experiences and activities visible from the lower levels. 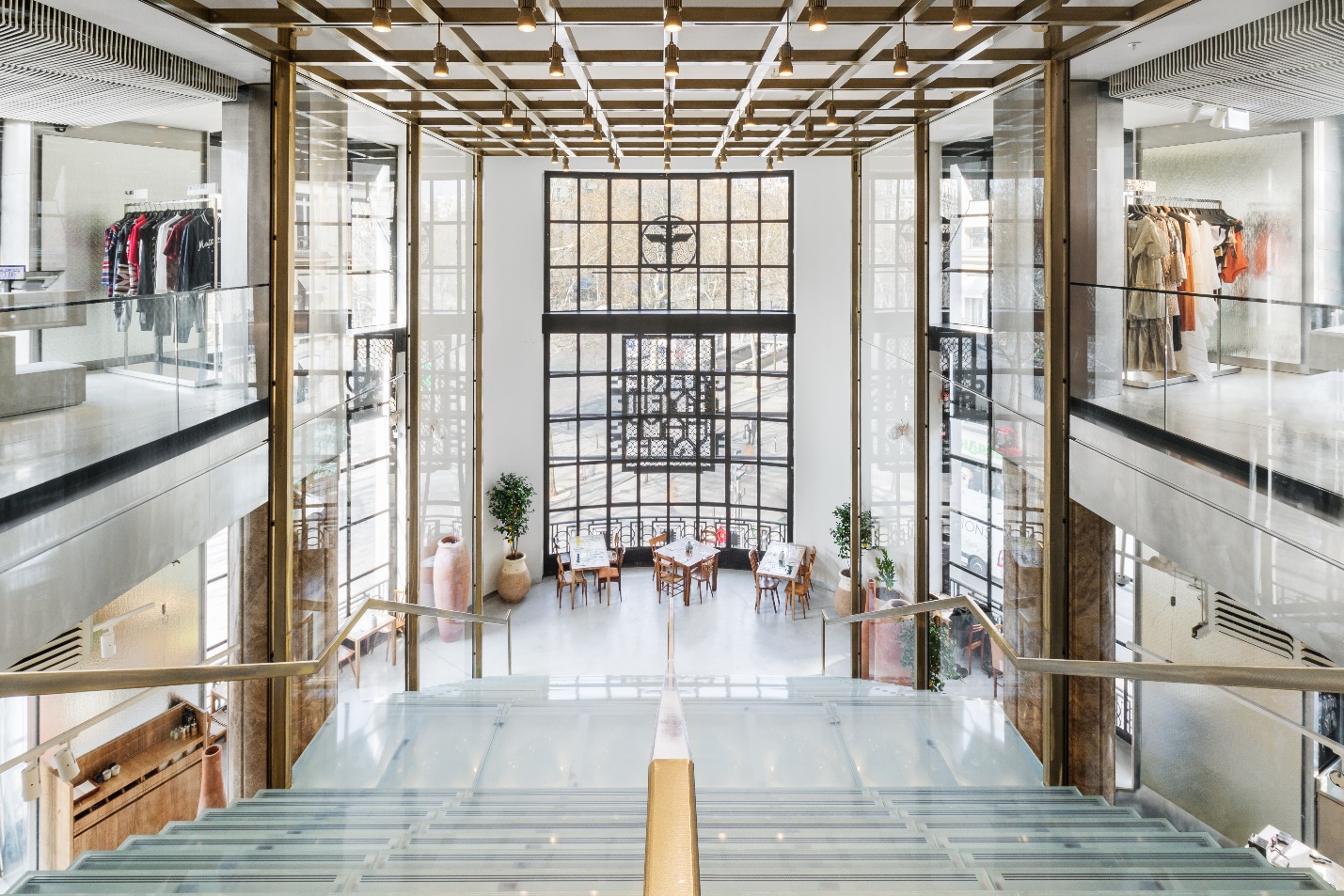 Image by Delfino Sisto Legnani and Marco Cappelletti Visitors can take a break from shopping and in the Oursin restaurant while enjoying views to the city or relax at the Citron coffee lounge, both designed by French fashion designer Simon Porte Jacquemus and operated by Caviar Kaspia. Meanwhile, a Parisian food court in the entire lower level, where groceries and eateries are divided into sweet and savory sections and where massive counters are arranged around welcoming shared tables. 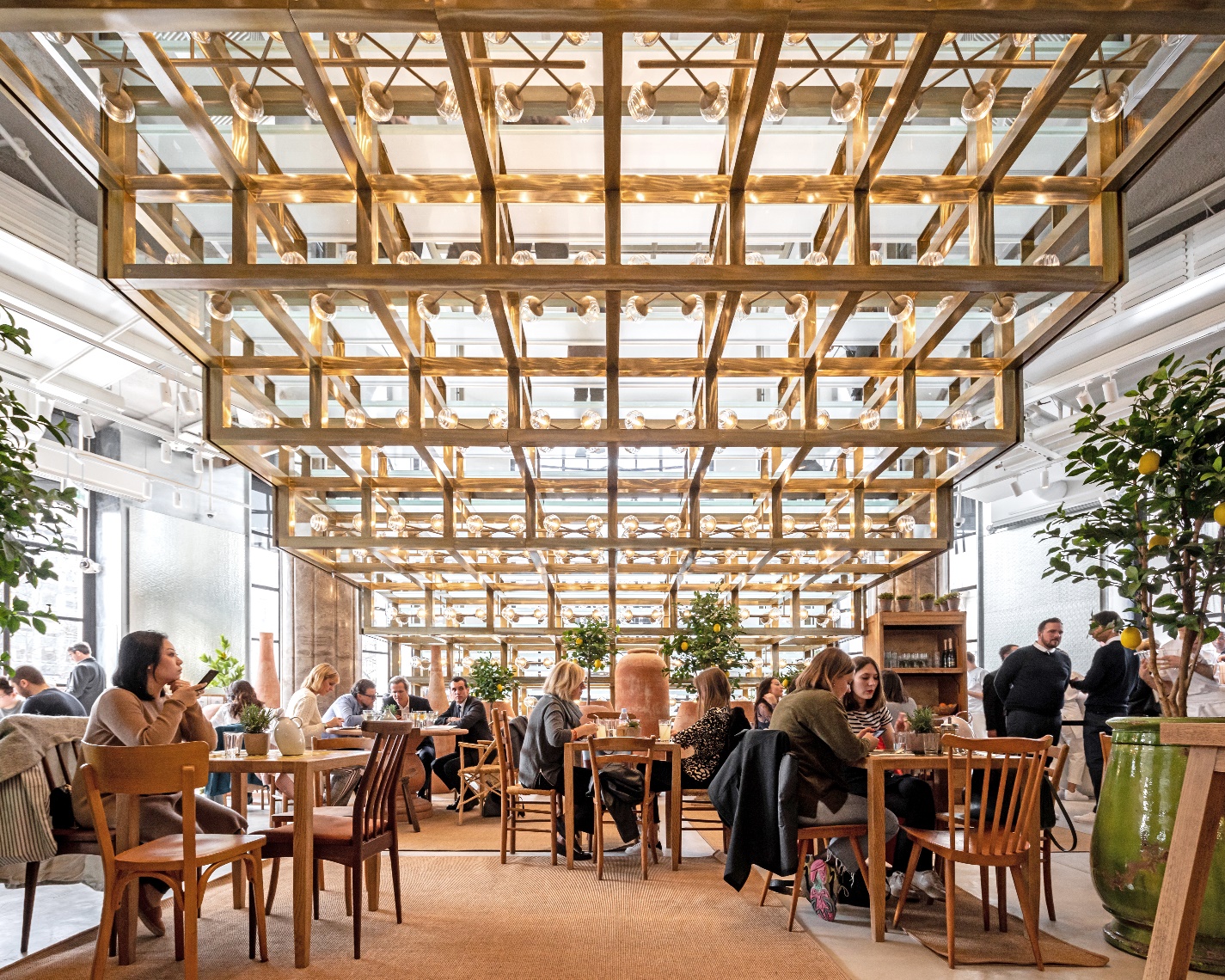 Image by Salem Mostefaoui Learn more about the Galeries Lafayette Flagship on Champs-Élysées and many other BIG projects at our FORMGIVING exhibition at the Danish Architecture Center in Copenhagen, on view from June 12th to January 5th: https://dac.dk/en/exhibitions/formgivning-big.