Dejardins unveils the tallest indoor living wall in the world 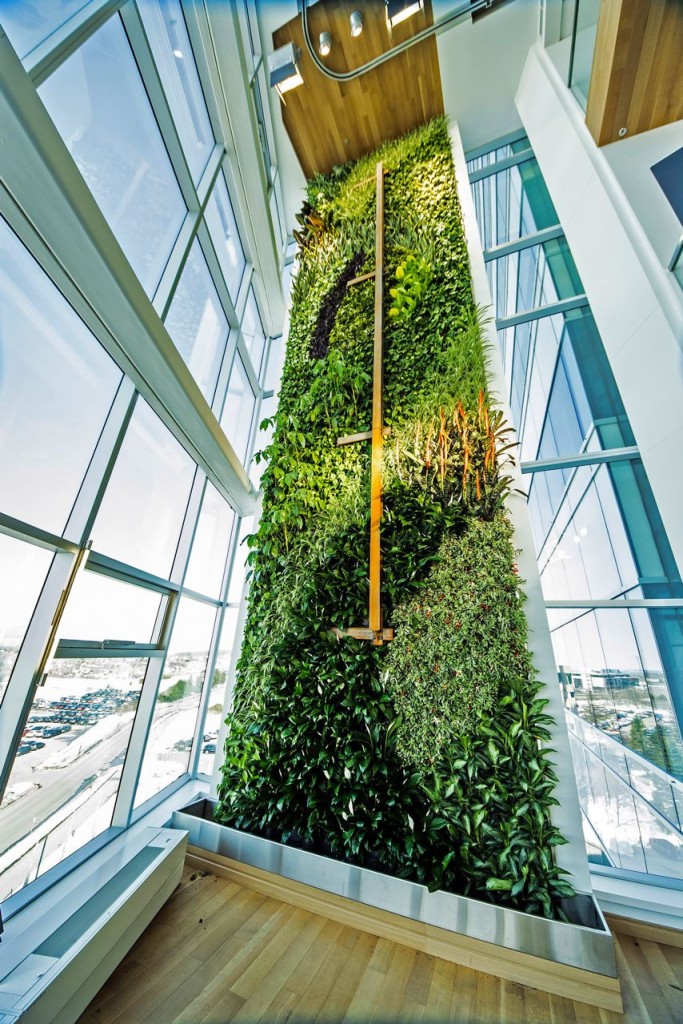 Dejardins unveils the tallest indoor living wall in the world

from the fascinating view of the St. Lawrence River

The new Desjardins building in Lévis houses the tallest interior living wall in the world. The artwork, “The Currents”, was designed by Green over Grey, a design firm specializing in the creation of living walls (aka green walls or vertical gardens). For this project, they drew inspiration from the views of the St. Lawrence River visible from Quebec City and Lévis.

“When Desjardins began work on revitalizing the Cité Desjardins de la coopération in 2011, we wanted to find a tangible way to show our commitment to sustainable development and enrich our employees’ work environment through meaningful initiatives, such as this beautiful living work of art” stated Monique F. Leroux, Chair of the Board, President and CEO of Desjardins Group. “According to our research, this living wall is the tallest indoor vertical garden in the world,” said Patrick Poiraud, co-founder of Green over Grey. “The wall is fully hydroponic (i.e. soil-free) and incorporates plants that thrive in similar vertical environments found in nature, like on tree branches and next to waterfalls. The end result is a visually pleasing piece that provides cleaner indoor air and improves both the acoustic quality and the value of the property.”

The green wall complements the new building’s eco-friendly concept, which is expected to receive LEED gold certification after completion September 2014. • More than 11,000 individual plants artfully arranged according to colour, texture, pattern and size covering a 15-storey wall of the new building at 150 rue des Commandeurs, in Lévis.

• Plants are growing in a hydroponic system (i.e. soil free) made of 100% synthetic recycled materials.

• According to the NASA Clean Air Study, the peace lily—native to tropical regions of the Americas and Southeast Asia and known for its distinctive white flower—eliminates significant amounts of pollutants, such as benzene, formaldehyde and trichloroethylene, which are found in photocopiers and construction materials.

• Plants are laid out to evoke the beauty of the St. Lawrence River as seen from the Quebec and Lévis areas, which were chosen due to the cities’ close ties with Alphonse Desjardins.