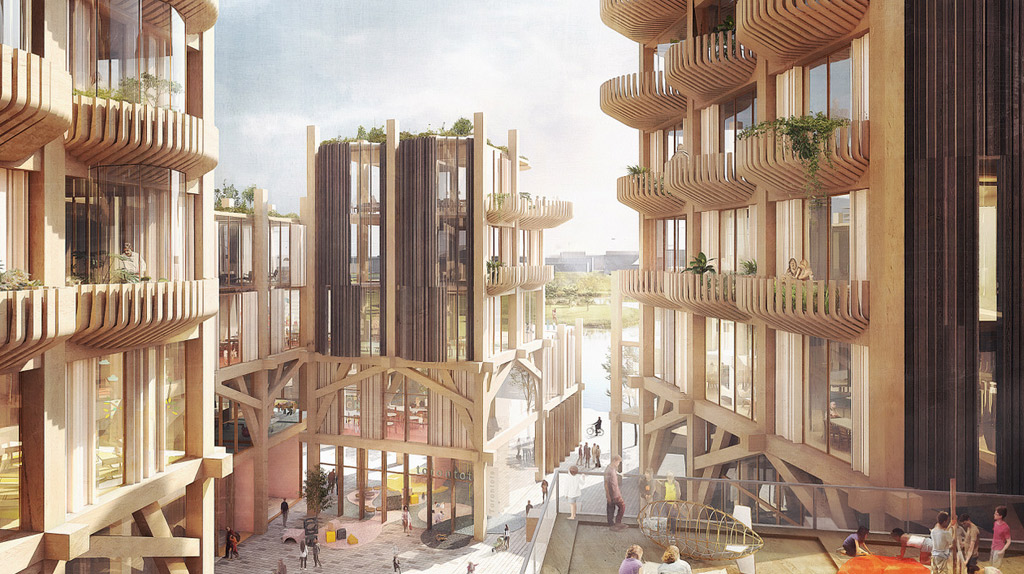 I love buildings. When I was eight years old my family moved to Hong Kong, one of the world’s most amazing cities. But even as I grew up fascinated by architecture, I also saw, in vivid detail, the heavy impact human activity had on the world around us.

So, I also care deeply about protecting the environment. The environment can’t speak for itself. It needs us to speak — and act — on its behalf.

How the built and natural environments can intersect for the benefit of both — and ultimately, for us, the people who live in them — is the focus of the work I do here at Sidewalk Labs. With Quayside, we’ve set ourselves a goal I am the first to admit is absurdly difficult: we are proposing to plan, build and operate the first climate positive community in North America. What, exactly, do we mean by climate positive? You may be more familiar with the terms ‘net zero energy’, “nearly zero” and ‘carbon neutral.’ To achieve these classifications, a project must be able to show that over the course of a year, it can generate as much energy onsite from renewable resources (or purchase green energy through the power grid) as it consumes. Typically, honours are attained based upon projected energy use, estimated with computer models and assuming energy efficient tenants, rather than the project’s actual operating energy, because the role of the developer ends on opening day.

Getting to net zero, or even close to, is no easy feat. Those efforts are to be applauded. That said, to achieve true sustainability, we need to take a step further, to climate positive. Why? Because, to stave off the worst impacts of global warming in the decades to come, we cannot maintain existing greenhouse gas (GHG) emissions. We must reduce them significantly. Which brings us to the challenge — as absurdly difficult as it is — of creating a neighbourhood that goes beyond zero and improves the health of the existing environment through its development.

The opportunity to aim for climate positive in Toronto is an objective of Waterfront Toronto for the Quayside development. In 2014, Ontario demonstrated world leadership by completing its elimination of coal fired power generation; a remarkable reduction from 25% of supply to zero in just ten years. Today, 90 percent of the power generated in Ontario is GHG-free. That’s like moving the starting line in a 100 metre dash up 65 metres because you have access to ample GHG-free energy through the power grid. In the race to get to climate positive, it gives Toronto a huge advantage over other cities in North America.

With the development at Quayside, we have the opportunity to use design principles and building techniques and materials to create structures modelled on the concepts behind Passive House. Passive House is one of the most rigorous voluntary standards for energy efficiency, and it has its roots in Canada with the construction of Saskatchewan Conservation House in Reginain 1977.

We also have the opportunity to learn from completed projects that have sought and achieved unprecedented performance. Many of these projects have found how in construction and operations, modeled results fall short.

Rather than build first and learn later why our buildings don’t meet modeled projections, we decided to study the energy use of existing buildings in Toronto, and compare actual building performance with modeled projections. That work is captured in detail in a white paper you can read here.

The study found that, on average, multifamily buildings in Toronto are using 39% more gas for heating and 21% more gas for domestic hot water generation than modeled, and on the flip side, residents are using 26% less electricity than predicted. The diagnosis for these gaps includes optimistic modeling of exterior wall construction, and how well steel components (which are superhighways for heat) are insulated (like a stirring spoon in a hot cooking pot) and outdated assumptions about the energy intensity of equipment and devices. And beyond modeling conventions, there are also lessons to learn about how systems are actually operated in buildings versus idealized models.

One of the major choices we’ve made with Quayside, to move us to our goal of climate positive, is to go 100% electric — including heating. As I mentioned earlier, Toronto and Ontario are already ahead of the climate-positive curve by having electricity generation that is 90% GHG free. That said, the reality of demand cycles is that power drawn during peak hours, even in Toronto, is at its most GHG-intensive. In Ontario, this is when gas-fired generation plants come online. To bridge the supply gap in Quayside, we’re planning on using a combination of solar and battery power, as well as geothermal exchange, sewer (waste water) heat and the heat rejected by air conditioning systems which run year-round for some commercial and industrial uses.

We’re also moving toward the goal of making our buildings more autonomous. We want them to learn from how their occupants use them and, for example, turn down or up the temperature when a space is unoccupied. Many people have early versions of this technology in their homes today in the form of smart thermostats. We’re looking at expanding this approach to a building’s entire energy ecosystem.

We have many more ideas in development, many of which we shared at Roundtable 4. We’re building on those ideas later today at Waterfront Toronto’s Design Review Panel, where I’ll be making a public presentation on our Pathway to Climate Positive Communities. I’ll be covering six main areas where we’re working today:

Advanced Power Grid: How we can use solar, batteries and new dynamic electricity rates to reduce peak demand (when grid-based power is at its highest GHG content)

Thermal Grid: Like a power grid, a thermal grid with heat pumps can exchange energy between “sinks” and “sources” to move heat from areas with excess (like the sewer system, which is full of hot water from showers) to areas that want more (like your home on a cold winter day) and also to seasonal thermal batteries, which is a service that geothermal wells can provide.

Low Load Buildings: Insulated and airtight buildings require less heating and cooling and can maintain occupiable temperatures without heating through a wintertime power outage of at least three days.

Active Stormwater Management: Developing a connected, green stormwater infrastructure that reintroduces nature into a gritty urban environment while reducing the need and cost of concrete infrastructure in buildings.

Smart Disposal Chain: Using smart chutes and a pneumatic waste system to enable “pay as you throw” disposal, feedback to individuals on the community’s sorting practices and streets without garbage trucks.

The proposed community of Quayside is just that, a proposal. Everything we’re planning is iterative. All of our hypotheses will not play out. It’s also why we’re sharing our plans, and listening to feedback, every step of the way.

Toronto already has a reputation as a world leader in building and energy innovation. Quayside offers the potential to build on that progress and deliver a North American first — a community that is actively and measurably climate positive.

Want to know more? You can download my presentation to Waterfront Toronto’s Design Review Panel here and read the reports on our residentialand commercial building studies.