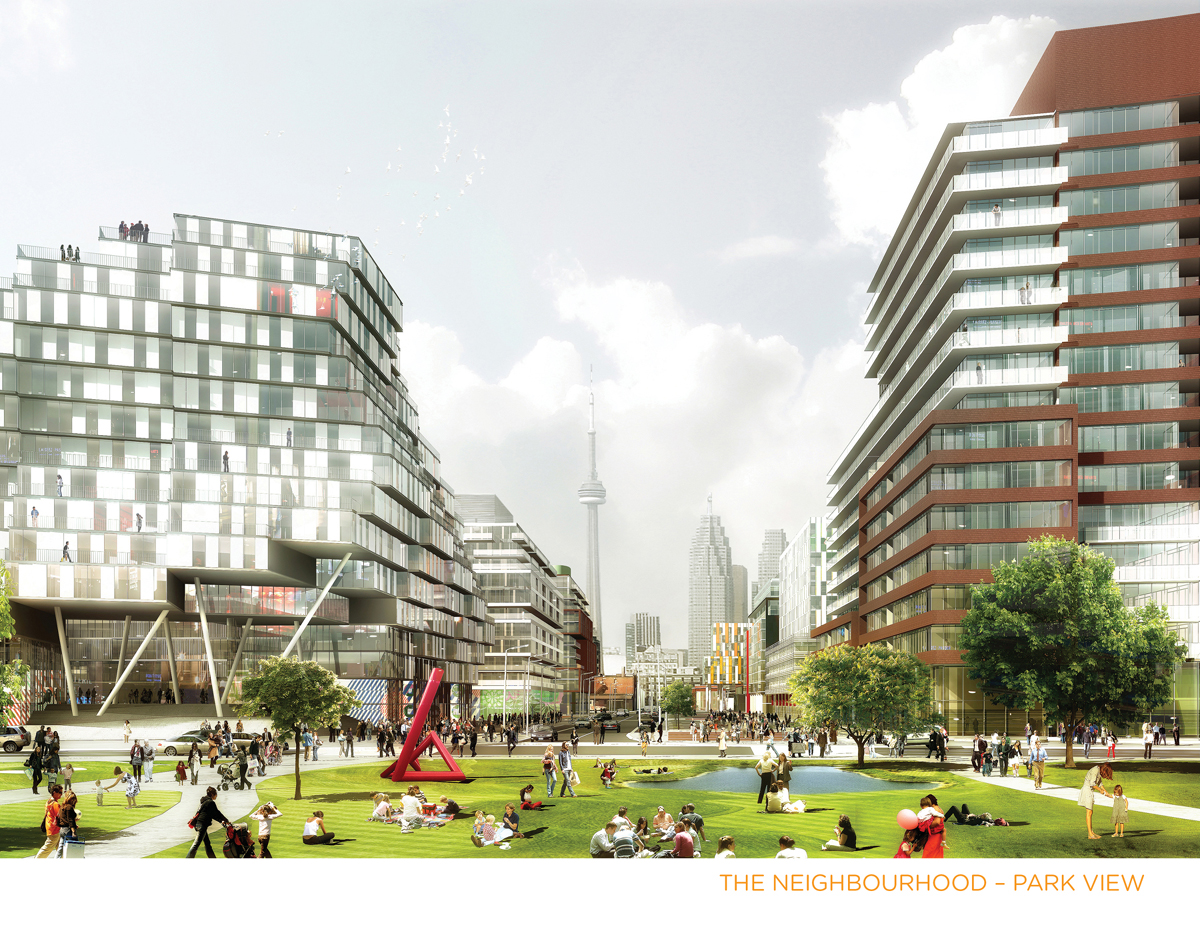 To say no stone has been left unturned in building Toronto’s next great neighbourhood would be a grand understatement.

So remember this name – Canary District. Chances are people will be talking about this unique revitalization of the city’s West Don Lands today, tomorrow and for many years down the road.

There are, of course, many reasons for that, but the green factor cannot be ignored. When finished, the area mostly known for its industrial rail land will be transformed into a vibrant mixed-used sustainable community with a distinct urban architectural design.

It’s a mammoth challenge. However, real estate developer Dundee Kilmer Development Limited confidently feels it is up to the task.
Jason Lester, president of Dundee Kilmer, in an article published in the Globe and Mail newspaper, was quoted as saying “we’re going to create the most sustainable mixed-use development that the city has ever seen.” Mostly, feeding off the fact that the overall design meets LEED Gold criteria, the area aims to be self-sufficient and an urban village where residents can live, work and play.
First things first, however. Commissioned by the Ontario government, Dundee Kilmer has been entrusted with the construction of housing at the 35-acre site for 10,000 athletes and coaches for the upcoming Pan American Games in 2015. And, unlike similar sports-related projects, which often experience fluctuating design and construction costs, this development is set up to avoid overruns.
When the 2015 event ends, the same buildings will be altered and sold as approximately 5,000 townhouse and condo units. Included in that will be daycares, schools and community centres.  And Dundee Kilmer is committed to inserting mid-rise, mixed-use development, a progressive public-private funding template and generous recreational spaces into the mix. Additionally, the master site plan for Canary District shows that construction will be phased in, starting with Canary District condominiums, then moving on to a George Brown College residence, a YMCA, market condominiums and “affordable” rental housing.
The YMCA facility, by the way, to be built at the corner of Front and Cherry streets, will be the largest in Toronto. It will also serve as a training centre for athletes during the games. A full 20 per cent of the housing in the Canary District has been targeted as “affordable” and the George Brown Residence will have accommodation for 500 students.
The Canary District – which gets its name from the now-closed Canary Restaurant that operated from a 19th century Cherry Street building since the 1960s – will be known for its walkability, with an extensive pedestrian network designed by architects to maximize green spaces with laneways, courtyards and terraces. The goal – to zero in on a health and wellness motif.
But the area will not be confined in any way, shape or form. Far from it. The community will be set up with links to mesh seamlessly with the nearby Distillery District, Corktown and St. Lawrence Market. And the connections will continue with new pathways and the extension of Front Street into a pedestrian promenade augmented by improved public access to Lake Ontario and the Don River Park.
A further creative twist was added by the use of four different architecture firms – Daoust Lestage Inc., Alliance and KPMB Architects, and MacLennan Jaunkalns Miller.
This cooperative approach, involving multiple designers, put forth a fresh hybrid of architectural design ideas. They remained true to contemporary architectural mores, but were also able to bring their own special aesthetics to the table.

And the four firms wholeheartedly embraced the challenge of the core principles placed before them.  Those included:
A healthy, green community: As touched on above, key considerations were given to environmental, economic and social sustainabilty. Each design element contains those characteristics.
Increased walkability: The secondary system of pedestrian routes also follow the paths of two former CNR rail lines, with connected courtyards, laneways and paths combined to form a continuous network.
Interconnectivity: This is cutting edge – creating a connection between old and new neighbourhoods in the area, augmented by a a modern design principle. Building scales and heights have been designed with a simultaneous architectural diversity and consistency in mind. All buildings in the eight-block-long district have been designed using similar materials in different ways, while façades will be recessed and roof heights will differ, creating a one-of-a-kind architectural flow.
Urban life: Future residents will be pleased to note that care has been taken to provide an extensive network of parks and balance of private and public spaces, as well as easy access to public transportation.
Gateway features: Called gateposts, the historic CNR and Canary Restaurant/Palace Street School buildings are being restored and integrated. There will be framing views to Don River Park and Toronto’s downtown skyline. Again, these elements will help to ensure openness and flow between established local neighbourhoods and the Canary District.

The Front Street connection: Painstakingly, each block in the village was designed to connect to a Front Street extension, which will serve as the main street. Then, at the base of each building, there will be cafes and restaurants, including retails stores. To further perpetuate the sense of neighbourhood, there will accessible recreational and community services.
A tip of the hat to Jane Jacobs: The late Toronto urban planning visionary was known world-wide for her ‘eyes on the street’ mentality, which was centred on creating a safe and connected urban environment. Some of the features adapted in recognition of Jacobs include large-scale building windows and balconies, with open and transparent streetscapes. This concept provides a connection between the street bustle and residents living above. Furthermore, laneways and side streets will feature loft studios and town houses at the base to attract creative entrepreneurs and families. Interestingly, the ground floors of all Canary District buildings are pedestrian-friendly, uniformly designed to six metres in height.
In the project’s promotional video, they talk about people, not infrastructure. They talk about community. They talk about creating a lasting vitality and ways to minimize urban stress. All in all, not bad for a former industrial backwater.
Not bad at all.