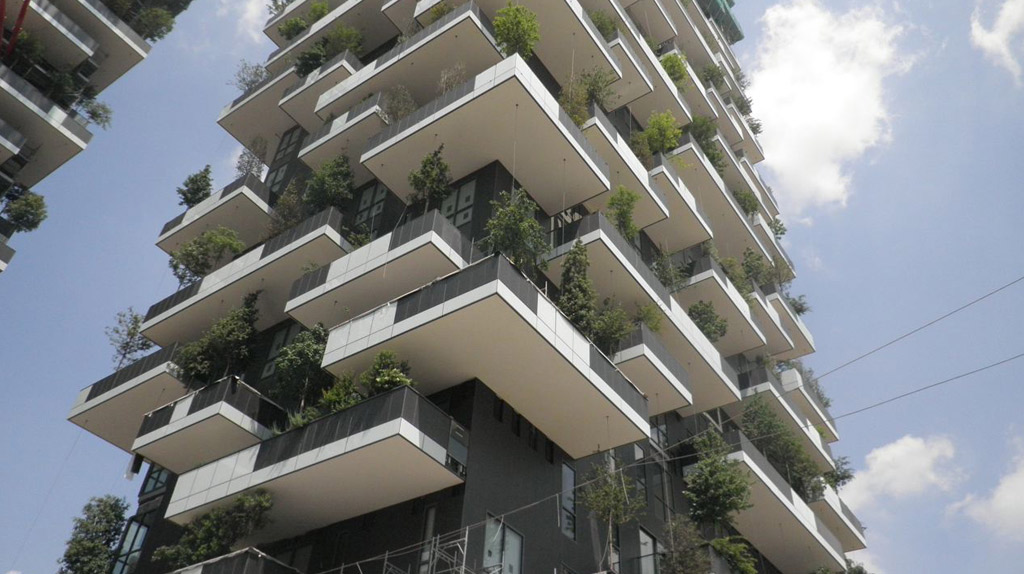 Bringing nature back to the Milan’s concrete jungle

The Vertical Forest project aims to build high-density tower blocks with trees within the city. The first example of a Vertical Forest is currently under construction in Milan in Porta Nuova Isola area, part of a larger redevelopment project developed by Hines Italia with two towers which are 80 metres and 112 metres tall respectively, and which will be able to hold 480 big and medium size trees, 250 small size trees, 11.000 groundcover plants and 5.000 shrubs (the equivalent of a hectare of forest). The Vertical Forest has at its heart an concept of architecture which demineralises urban areas and uses the changing shape and form of leaves for its facades, and thus which hands over to vegetation itself the task of absorbing the dust in the air, and of creating an adequate micro-climate in order to filter out the sunlight. This is a kind of biological architecture which refuses to adopt a strictly technological and mechanical approach to environmental sustainability.

biological habitats Vertical Forest increases biodiversity. It helps to set up an urban ecosystem where different kinds of vegetation create a vertical environment which can also be colonised by birds and insects, and thus becomes both a magnet for and a symbol of the spontaneous recolonisation of the city by vegetation and by animal life. The creation of a number of vertical forests in the city will be able to create a network of environmental corridors which will give life to the main parks in the city, bringing the green space of avenues and gardens and connecting various spaces of spontaneous vegetation growth.

mitigations Vertical Forest helps to build a micro-climate and to filter dust particles which are present in the urban environment. The diversity of the plants helps to create humidity, and absorb CO2 and dust, produces oxygen, protects people and houses from the suns rays and from acoustic pollution.

trees are a key element in understanding architectural projects and garden systems. In this case the choice of the types of trees was made to fit with their positioning on the facades and in terms of their height, and took two years to conclude alongside a group of botanists. The plants used in this project will be grown specifically for this purpose and will be pre-cultivated. Over this period these plants slowly got used to the conditions they will be placed in on the building.

ecology billboards Vertical Forest is a landmark in the city which is able to release new kinds of variable landscapes which can change their form in each season depending on the types of plants involved. The vertical forests will offer a changing view of the metropolitan city below.

management the management of the trees’ pots is under building regulation, as well as the upkeep of the greenery and the number of plants for each pot.

irrigation in order to understand the need for water the plan for these buildings took into account the distribution of plants across various floors and their positioning.